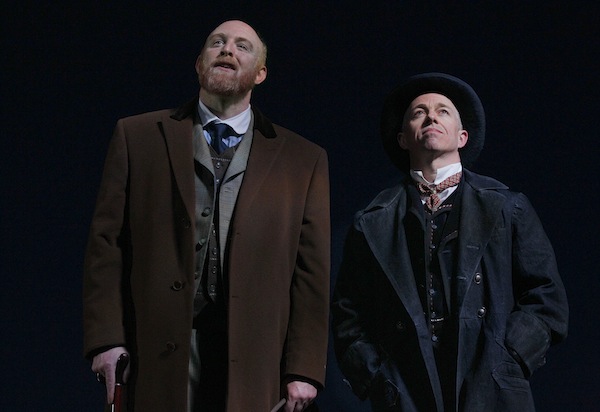 Sherlock Holmes purists may not be thrilled with Seattle Repertory Theatre’s production of The Hound of the Baskervilles, which takes some liberties with Arthur Conan Doyle’s original ending. But anyone with a love for mystery, an appreciation for clever stagecraft and a sense of humor will appreciate the adaptation by local theatre favorites R. Hamilton Wright and David Pichette. This world premiere production manages to be a compelling thriller without being self-serious—a somewhat tongue-in-cheek take on a Gothic murder tale.

This unusual tone is struck from the very beginning, thanks in large part to Darragh Kennan in the role of the Victorian mastermind Sherlock Holmes. While most portrayals of Holmes make him out to be an imperious know-it-all, who alternates between accusatory boredom and self-righteous professional rigor, Kennan’s charming incarnation has both an ever-churning brain and a bit of OCD. He can’t stop deducing any more than he can stop himself reorienting the silver.

Holmes and his right hand man, John Watson (Andrew McGinn), are whiling away a morning so dull it nearly drives Holmes back to his famous drug habit when a stranger arrives at 221B Baker Street. Dr. Mortimer (Basil Harris) has arrived on behalf of the Baskerville family, his neighbors up near the desolate Dartmoor. Sir Charles Baskerville has just died near Baskerville Hall, and though the cause was ruled to be a heart attack, Mortimer worries that he in fact died from the family curse: a terrible hellhound, who roams the moor and murders Baskervilles, thanks to evil ancestor Hugo Baskerville. Now, Charles’ nephew Sir Henry Baskerville has arrived from Canada to inherit the family home, and Dr. Mortimer worries that he will meet the same end.

Holmes claims to be too busy to go to Devon and orders Watson to accompany Sir Henrywith to Baskerville Hall and report back on everything he observes. Sir Henry doesn’t get on exceedingly well with his shifty servants, the Barrymores (Rob Burgess and Marianne Owen) or his neighbor Frankland (Charless Leggett), a gun-toting grudge-holder. He gets on rather better with Jack and Beryl Stapleton (Quinn Franzen and Hana Lass), a simple naturalist and his beautiful sister.

As this story unravels, there are red herrings, false alarms, an escaped murderer and love affair before Holmes arrives for the denouement, when the mystery of the Hound is finally revealed. There are also a lot of hilarious moments, some from culture shock between the unrefined Sir Henry and his scandalized employee, some from the overly theatrical way Beryl describes “visions” of horrors past and future, underscored by equally ridiculous light and sound cues.

It’s no small feat that all off these jokes, all of the winking references, are done within the context of the show, with no overly-clever nods from a modern-day perspective—an easy trap to fall into when looking for modern-day laughs. Also to the writers’ credit, they take full advantage of Kennan’s impressive range to show off Holmes’ oft-referenced but seldom staged talent for disguise.

The extravagant look of the show is by set/lighting/projection designer L.B. Morse, with shifting brick pillars, opulent homes and projections. Projections can give a set an otherwise unattainable sense of detail—in this case a sense of urgency and movement through the crowded streets of London. But when it comes to the show’s implied violence, inscrutable visuals are totally unnecessary. We hear screams, we know what’s happening. These moments, along with one absurdly fake-looking mannequin and the corporeal form of the title villain, are the only moments when we are laughing at the show, not with it.

For all the money poured into this beautiful show, the cast is so talented that it outshines all of the trappings. From Holmes to the loyal, avuncular Watson to the cowboy-ish Sir Henry and the gruff Frankland, there isn’t a weak link on this stage. With the help of director Allison Narver, who has wrangled this beast of a show into a delightful three-act evening, the ensemble has pulled off something remarkable: A rich evening of drama that doesn’t forget to be fun.

The Hound of the Baskervilles runs through Dec. 15 at Seattle Rep.

Andrew McGinn and Darragh Kennan in Seattle Repertory Theatre’s The Hound of the Baskervilles. Photo by Chris Bennion.