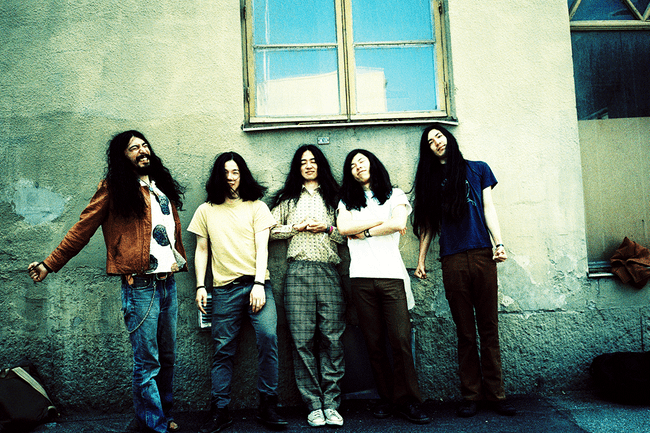 Translated from the Japanese, Kikagaku Moyo means “geometric patterns,” a name that made perfect sense as I watched the band take entranced listeners through a sonic kaleidoscope at this summer’s Pickathon music festival outside Portland. These five shaggy, bellbottomed young Tokyoites look like they’ve been woodshedding their impeccable, absorbing psychedelic rock inside a cave since they were born, spanning meditative, sitar-wielding raga-rock to whale song-like Pink Floyd abstraction to rocket-fueled Smashing Pumpkins-esque hard riffage. They’re superb musicians that have apparently become unstuck in time and place, which means you should see them whenever and wherever you have the chance.

It’s 2018 and jazz music is approaching the mainstream cultural ubiquity of its early days. Credit musicians like Shabaka Hutchings—young, savvy players as well versed in the history of the genre as in contemporary hip-hop, who have something to say about life beyond music. Hutchings, a saxophonist, hails from London’s fertile jazz underground; his quartet Sons of Kemet features a tuba and two drummers. SOK’s 2018 release Your Queen Is a Reptile was their first for iconic label Impulse! Records, paying tribute to black female heroes throughout Hutchings’ life via frenetic, fusionistic voyages through the rhythms of Caribbean-style Carnival.

There’s no reason a band as prolific as Oh Sees should be good, and yet here we are, agog at the quality, originality and overall umph of the SF-to-LA psych-rock quartet’s zillionth album. Smote Reverser follows the trad-and-true Oh Sees template: Let bandleader-singer-guitarist John Dwyer point the way into the maelstrom and see what happens. Even with two drummers pushing the pulse, these new songs feel less mosh-pit instigator, more inner-voyage cruise ship director. Regardless of the material they’re touring on, Oh Sees will forever be one of the great live rock bands of this generation, so do what you must to get into one of these two sure-to-sell-out shows.

My go-to album of the summer, Michael Nau & the Mighty Thread’s eponymous LP took a turn from the softly strummed jangle of his earlier work in the Suicide Squeeze-signed Cotton Jones toward something a little more assertive. The new stuff plays like vintage AM-pop gold, unfailingly mellow and restrained yet driven by a keen and fluid sensuality. Would-be hits like “Less Than Positive,” “Light” and “Can’t Take One” are intimate but smug, easy but meticulous—gentle, memorable songs for lost afternoons and too-late nights.

Usually performed in a concert hall, Mahler’s “Resurrection” Symphony receives a special performance in the ambiance of St. James Cathedral, with the large choirs it needs plus a majestic organ. British organist David Briggs will play the organ part on the combined organs with the main cathedral choir plus its young Women’s Ensemble Jubilate!, Opus 7 and Seattle Pro Musica. Why this special attention for a Mahler symphony? This transcendent work starts with a funeral march and ends with the soaring assurance that we will rise again. What better place to appreciate it?

Within the city’s vibe-iest venue is the month’s vibe-iest performance, highlighted by the gorgeous ambient electronica of Seattle’s own Benoît Pioulard, aka multi-instrumentalist composer Thomas Meluch. Meluch produces sonic vistas much like a painter renders a landscape, with washes of synthesized color and texture providing the big picture and occasionally zooming into the fine filigree of voice or instrumentation. Hotel Neon is a Philly-based ambient trio that travels similarly cinematic byways and Portland’s Marcus Fischer unspools brooding, atmospheric abstraction.

Café Music in a café? Sure! Emerald City Music includes Paul Schoenfield’s jazzy trio Café Music on the second offering of its third season at Kakao on Westlake. One can almost see the beer can on the piano lid in this enjoyably atmospheric work. That’s not all: Several delectable French oboe and bassoon works by Saint-Saens, Poulenc and Milhaud are on the program, plus Jean Françaix’ String Trio. Sit back with a drink and enjoy.