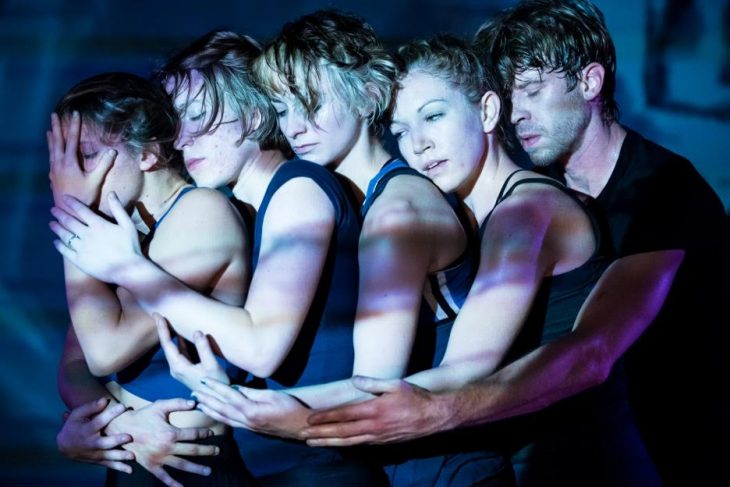 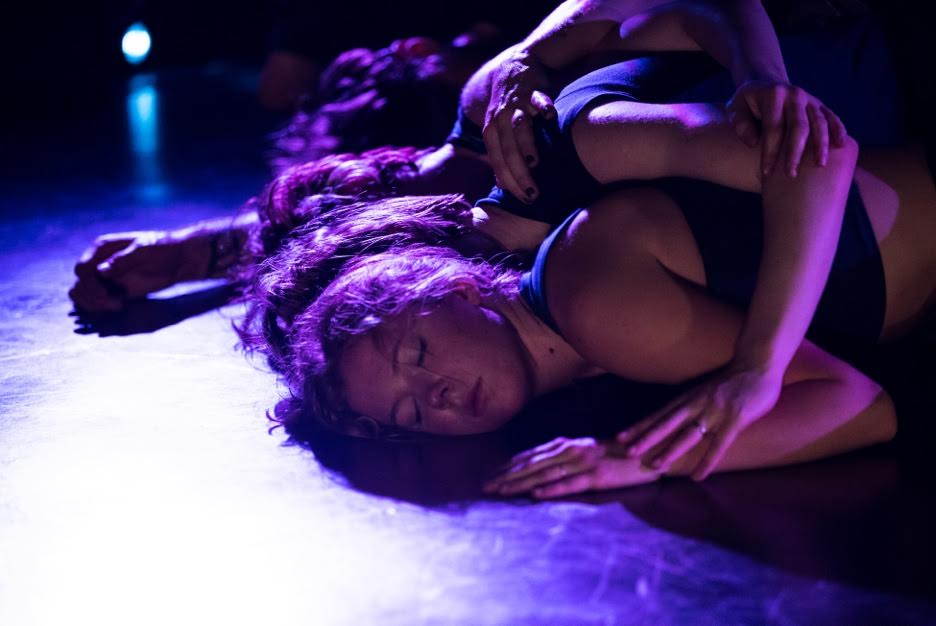 A glaring purple light illuminates a dancer on the barren floor of On the Boards‘ studio in Lower Queen Anne. His limbs stretch and pull, body contorting and expanding as he shifts between supine and upright, movement changing from sharp to fluid in a moment. A projector blasts kaleidoscopic images onto his skin, turning this squirming figure into a living canvas of splotchy blue and yellow light. Six other dancers wait to enter the stage and engage with the solo dancer, their bodies lying depleted and motionless, piled on the floor. The room hums with guitar notes distorted until almost unrecognizable, making the air heavy with echoes.

This otherworldly performance is a work in progress by Faunix, a multimedia art company that combines movement, visuals and sound to create immersive installations and mesmeric audience experiences. This open studio performance at OtB in early November was guided by the writings of Oliver Sacks, says dancer and artistic director Ashleigh Miller, who founded Faunix in July of this year. She and musical director Travis Corwin, a classically trained guitarist, are creating various iterations of the same idea exploring mental illness, psychological disorders and hallucinations. This showing was another step in Faunix’s process to personify the mandalas that sometimes accompany migraines, seizures or psychedelic drugs. (There is talk of a final spring installation, but specifics have yet to be secured.)

Faunix, Miller says, aims to make fine art an accessible, social experience akin to attending a concert. The open studio was a durational piece, where the audience was encouraged to come and go as they pleased over the course of three hours. “We never want the audience to feel separated from us,” Miller explains. “We want them to be a part of our world.”

Miller, born and raised in Redmond, has studied dance since the age of three. Growing up in the world of competitive dancing, which emphasizes pure technique over artistic expression, she felt like an outcast for identifying as an artist. She learned to express herself through music (singing and composing) and visual art (painting, sculpture, film), while continuing her dance training. She graduated with a BFA in Dance from NYU’s Tisch School of the Arts in 2013.

When Miller returned from New York in 2014 to recover from a spinal injury, she thought the move would be temporary. Instead she quickly became enamored with the Seattle art scene and culture, gratefully overwhelmed with the possibility to create. “It just felt like the right place,” Miller says. “Why would I leave this really positive, enthusiastic community where I have the ability as a young artist to do these large scale works?”

Miller‘s style is heavily influenced by Gaga, a “movement language” developed by Israeli choreographer Ohad Naharin. The movement is sensation-based, guided by imagery and concepts rather than a commitment to certain steps or poses. Faunix dancers combine this freedom with the more structured techniques of ballet and modern dance. Corwin uses an electric guitar, looper pedal and freeze pedal, among other effects, to make a layered and intricate psycho-acoustic soundscape. Faunix combines this audio and dance with Miller’s vocals and projected images (sometimes set on a loop, sometimes controlled live by digital media collaborator Bryon Carr) to develop a controlled chaos, a mix of planned and improvised art.

“It’s all about respect and trust,” Corwin says. “It’s this process of discovery that you and the audience are experiencing together. There’s no real risk of playing something that feels dishonest or forced.”

Whatever inspires the ensemble next, the company’s aesthetic will remain the same as Miller and Corwin move towards creating ever-more interactive art experiences. The two directors aim to build installations that encourage audience members to roam, and choose the angle from which they view the performance. There is even talk of involving computer programmers and the motion-sensing Xbox Kinect, so that projections may follow the cues of dancers or audience members.

While they wait on securing grants or residencies for their spring installation, Miller will continue to teach an open-level movement strategy class at Velocity, for which Corwin plays musical accompaniment. The class follows many of the same principles of Faunix: teaching dancers how to generate their own movement, using solid technique as a blank canvas.

“The idea is that dance is meant for everyone—all ages, all skill levels, all bodies,” Miller says. “We think that art is for everyone.”