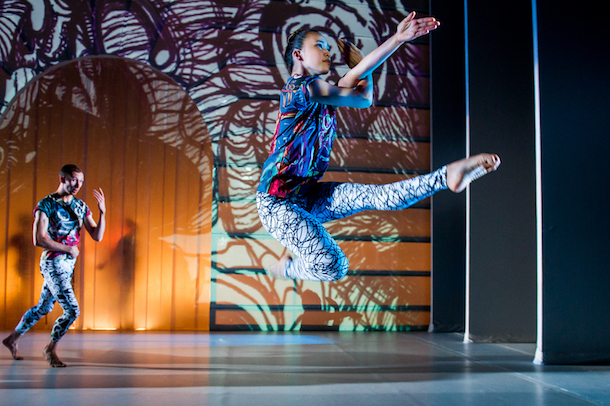 A gunman sought out Pulse nightclub in Orlando because it was full of queer bodies—queer bodies celebrating, dancing and loving in community. The vast majority of the victims of the June 2016 shooting were people of color, and the diverse Spectrum Dance Theater seems a fitting group to respond to this tragedy through their own dancing bodies. The world premiere of (Im)pulse, now running at Seattle Repertory Theatre, opened just days after the one-year anniversary of the tragedy, and while it doesn’t address the events in Orlando directly, it dives deep into the psyche of victims of LGBTQ-directed violence.

In Part One of the evening, director Donald Byrd takes inspiration from artist, writer and AIDS activist David Wojnarowicz. As a recording of Wojnarowicz’s poetic writing plays, the dancers plunge full-throttle into Byrd’s signature style: sharply accented legs and arms moving through modern shapes at breakneck speed. Framing the dance is a repeated monologue from Wojnarowicz’s writings, which recalls a brutal attack on a gay friend—a beating that left the victim unconscious for six days.

The harshness of the dance, combined with tormented, almost spastic string music (Bob Ostertag) and the sound of a jeering crowd, captures the intensity of the story. But the rigid, classical dance vocabulary is a strange choice for addressing a cultural movement and artist that actively sought to subvert hegemony through queer aesthetics. The dancers’ costumes (Doris Black), are similarly at odds. Colorful graffiti images reminiscent of Jean-Michel Basquiat (a contemporary of Wojnarowicz in the 1980s New York art scene) are printed on form-fitting T-shirts, and while they evoke aesthetic ideas from this time period, they also feel like a sanitized version of the rebellious art form that inspired them.

The work soon hits its stride, however, finding choreographic articulation in a cat-walking section. Male cast members strut up and down the stage referencing dance forms pioneered by the queer community during the ‘80s and early ‘90s. Feminine flourishes accompany feats of athleticism and flexibility. Each dancer works to outdo the previous, radiating confidence and attitude, until one-by-one they drop to the ground. Those still dancing must navigate a field of bodies, and the bone-chilling image recalls the devastation of AIDS on gay communities during the peak of the epidemic.

Continuous high-intensity dancing and cacophonous sound create an unyielding atmosphere of tension that breaks only momentarily as Fausto Rivera and Paul Giarratano lean in for a kiss. But this brief moment of intimacy is quickly interrupted by a homophobic slur that rings out over the music. A crowd of dancers pushes Rivera around the stage, manipulating his every move as Giarratano backs away, observing stoically. The final time we hear Wojnarowicz’s violent story, Giarrantano is left alone on stage, spinning and throwing himself brutally across the space—a stylized fight with an invisible attacker.

An unpublished play by Brian Quirk serves as source material for Part Two of the evening, and the story dovetails seamlessly with Part One’s narrative. Actor Craig MacArthur awakens in a hospital bed, eyes blackened and face bloody, reprimanding himself for daring to wear the pink leg warmers that catalyzed his assault. The monologue is a jumbled collage of memories, thoughts from inside a coma and conversations from his hospital room. In a committed and impressive performance, MacArthur’s performance switches rapid-fire between his Spanish-speaking mother, his tough-love therapist, his sassy best friend, his lover, his father, his internal stream of conscious, and of course his character’s own sputtering voice, struggling with brain damage and a broken jaw.

The dancers take a bit of a back seat here, reappearing, dressed in hospital gowns, to illustrate a memory or frenetically dance during one of the frequent, violent seizures that interrupt MacArthur’s monologue. The format—monologue, seizure, monologue, seizure—is initially interesting but is repeated ad nauseam for close to an hour. While the format is exhausting, the amount of time spent inside this character’s life forces us to reckon with his humanity. Details and memories emerge from the fractured script—we learn about his first love, his failures, his relationship with his parents, his most intimate and passionate moments. We are permitted a window into the disruption and devastation this kind of senseless attack causes in a person’s life. The emphasis on time and repetition speaks directly to how long and how difficult rehabilitation is, both physically and emotionally. In the Pulse shooting, not only were 49 people killed, but 58 others were wounded, and hate crimes like the ones depicted in the show haunt the LGBTQ community all too often. (Im)pulse zooms in past the statistics and onto a single human that could be any one of the thousands affected by hate crimes every year. It is a heartbreaking call to action.