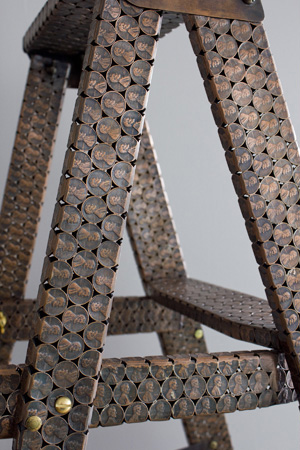 Remember back when Regina wrote? Though I liked her sharp-witted, purple prose, one of the things I didn’t especially like about her reviews was the side-by-side, sweeping comparisons she’d often throw out. “Look how this artist’s thing looks like this other artist’s thing! They both put a rabbit on their thing! They both made a basketball!” These kinds of superficial comparisons often just glossed over artwork and were annoying. But watch me. I’m about to do it.

I’m going to set Sean Johnson’s Wealth next to Stacey Lee Webber’s The Craftsman Series: Ladder. The former is installed at Johnson’s solo show, Pieces of a Whole, currently at LxWxH Gallery. The, er, latter is at Bellevue Arts Museum as part of Love Me Tender, an exhibit that exclusively uses currency as its material. Love Me Tender claims to examine society’s values and to turn, by the artist’s alchemical cleverness, the generic allure of wealth—symbolically manifest in junk paper and metal—into something more than the sum of its parts. There’s a lot at play, like a sidelong wink at the absurdity of the art market and the idea that currency (and to some extent aesthetics) are only ever arbitrarily assigned value. 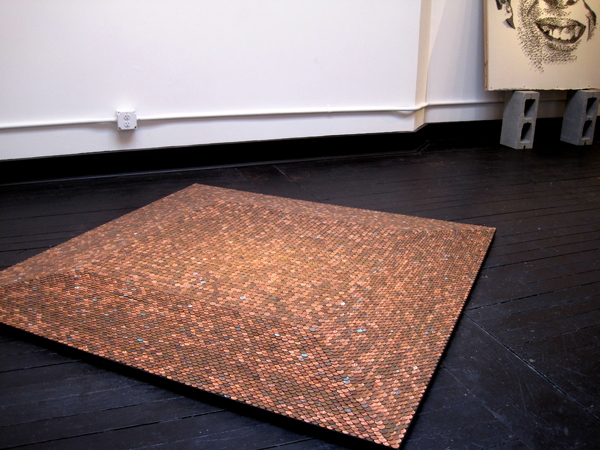 NOT BUYING IT
Johnson’s show is about something different: it’s about mass. Lots of little things coming together to form a larger picture (literally). He pits the power of masses against the individual. What happens to the value of a person when he or she is reduced to a mathematical statistic, he wonders? Are there strength in numbers? Is the value of a penny increased when it’s piled prettily with 700 others? Very serious.

But I’m not sure Johnson makes me care, to be honest. A gently sloping pyramid of copper stacked in fish scale pattern is pretty (copper is pretty), but not breathtakingly so. And Wealth comes with a $10,000 price tag (his other pieces are similarly priced), which only makes me think of the individual who can and will spend ten grand on a pile of pennies. This individual is not, more than likely, the patron of a gallery developed around the mantra of accessibly priced art for the beginning collector. I like Johnson’s work. But I left this exhibit thinking, I don’t want him to make art out of nails, pennies, clothespins and tokens. I want a grand sculptural gesture. I want fucked up furniture and humor.

It was a few days after seeing Johnson’s show that I was talking to another artist about it. He brought up Webber’s piece: a six-foot-tall ladder constructed from pennies and brass. It’s pretty in a different way, and Webber’s makes more metaphors. Both are lugubriously didactic.

I really hope pennies aren’t the new it material. 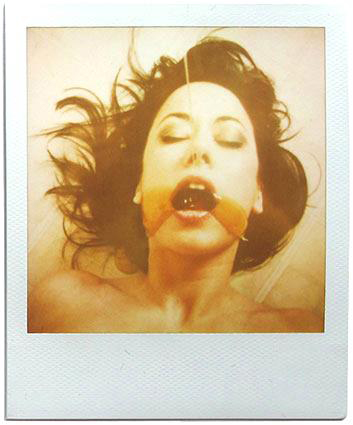 BEES IN THE TRAP
Thursday night was Erin Frost’s re/semblance at Vignettes. One large wall was covered with a grid of gold-tinted Polaroids. The images were stills from a video that was looping on a monitor in the center of the room, around which people were huddled, hushed, staring.

In the video: picture Frost lying on a white tile floor (maybe a kitchen floor; we aren’t sure). Her smoky eyes are upturned, languid, her mouth open to catch….honey. It pours in, a thin stream. A thread. A gush. It slowly fills her mouth, overflows, then runs out the sides. It snakes down her cheek and neck. It’s still coming, the stream. A whole sticky pound of honey. She doesn’t swallow. She flinches once or twice, trying not to drown in it.

The image cuts to light-colored honeycomb geometries, like kaleidoscope vision, swirling and spinning.

“I’m tired of gold,” said a visitor under his breath. But I’m not sure I am. Does gold, like wealth—or sex, really ever go out of style?

Frost’s video is a nice evolution in her work, even if it has too many ideas and disjointed images shoehorned into one piece. (There’s half a dozen stories being told with incoherent tempos and edits: Frost sitting on the floor stitching a pair of nude stockings together while she wears them; a strappy cut-out paper mask growing on her head; geometric abstractions; her alternating naked-and-clothed body dangling from a lintel, etc.) The video format intensifies Frost’s willingness to be visually trespassed. Less static than a photo, the claustrophobic, tight shots of her face, neck or legs create the impression of a body turned into fragmented landscapes, or rolling terrain literally flowing with milk and honey. We walk all over it with our eyes.

Frost has always invited a gaze. We’ve all seen her breasts before. In fact, every inch of her body. We feel that we know it intimately; maybe not in a sexually titillating way (the newness has worn off), but like we know our own bodies. You could say she’s made us comfortable in her own skin.

I also wonder what happens as the narcissist ages. Frost’s body is neither young nor old. It looks ageless. It’s naturally beautiful. But she still vogues, poses, postures. She knows all her good angles and uses them. That’s her style. Will Frost continue to vogue as she gets older, striking the same seductive poses till the end? That could be one trajectory, like Hannah Wilke, whose body was documented as it transitioned from object of youthful beauty to one of abjection and disease. In such cases, a translucent vulnerability can become an entirely other kind of beauty. Frost is on the cusp of some sinister territory, playing with needles, tight spaces and drowning in honey, but she has never really shown us anything that disappoints our insatiability for prettiness, self love and unapologetic, female self-validation.

And that’s really not a crime.

THOSE WERE THE DAYS
Oh, and speaking of Hackett, someone sent this to me after I published my too-brief exchange with the infamous godfather of Seattle art criticism, Matthew Kangas. It’s an excerpt from and/or “Notes,” July, 1980. Meow. And to imagine, I was still messing my diapers back when they were going at it. 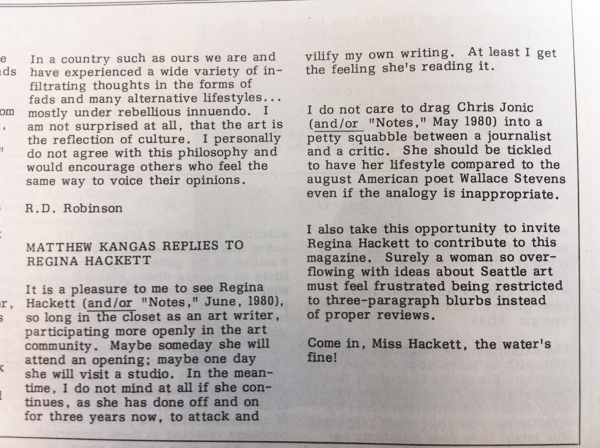 TO DO LIST
It’s one of those rather uneventful weeks at the end of the month. Time to catch up on beauty sleep (and NyQuil, if you have a cold like me).

Tuesday, April 30: Vanguard Seattle presents: A Film, A Band and A Drink. Vanguard Seattle, the rising fashion/art/about town magazine, invites guests to The Crocodile for a party that includes drinks (of course), the Yogoman Burning Band and a screening of The Marqueen movie (about a family running a brothel!) by filmmakers Jared Thompson and Ryan Jorgensen.