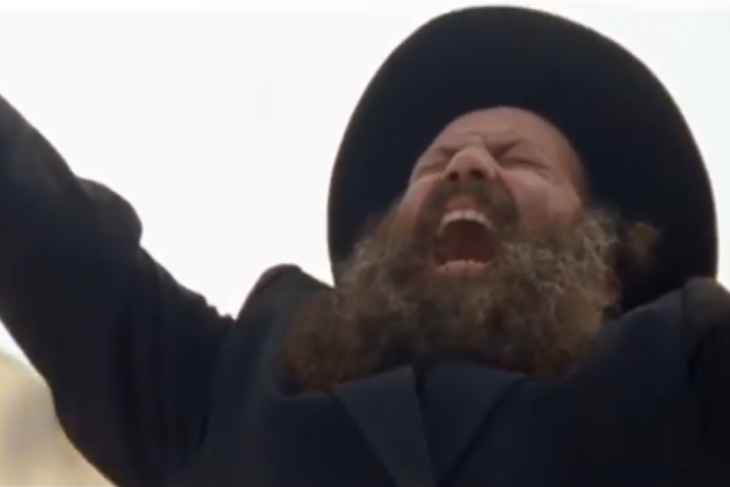 Those culture warriors who fret over the repurposing of Christ’s birthday as a meaningless, all-inclusive “holiday” might just have a point. After all, my Atheist family went Christmas-crazy every year, with the tree and the lights and the advent calendar­—the whole shebang. We secularists have hijacked the Yule and turned it into a weird, generic celebration of life and giving and whatnot. But as we all know, Christians actually stole December 25th from the Romans, who had previously been using that day to celebrate…I don’t know, probably Hercules’ birthday. The point is: We all want a big time, A-1 holiday of the year, a spark of joy and festivity to cling to in the brutal despair of winter.

With that in mind, here are five holiday movies that offer a different cultural perspective on the holiday season.

USHPIZIN (2004)
The first, and probably still only, film to be made among Jerusalem’s ultra-orthodox community, Ushpizin (Aramaic for “guests”) is about a poor, childless couple who pray for miracles and endure hardships during the harvest celebration of Sukkot. That description doesn’t make it sound nearly as zany and uproarious as it is. Ushpizin is a frantic, screwball comedy made by people who had to get special permission from their rabbi in order to work in the worldly realm of film.

TRAVELERS AND MAGICIANS (2003)
This is the first film shot entirely in the Kingdom in Bhutan. It’s a gorgeously shot love letter to Bhutanese culture involving monks, storytelling and the clash between Buddhist tradition and incipient modernity. What I remember most is the scene where a bunch of ladies hoist a giant phallus to the top floor of a large house during some kind of phallus festival. Bhutan, it turns out, practices phallus worship on the regular. Some people just know how to party.

LAST TRAIN HOME (2009)
Speaking of clashes between tradition and modernity, this stellar documentary chronicles the insane holiday migration of 130 million city-dwelling workers back to their home villages for the Chinese New Year celebration. Within that monumental flood of humanity is a smaller story of one family coping with vast, unstoppable cultural change. This is a bittersweet film that errs more to the bitter side, shot during a time of transformation in a nation frantically trying to keep pace with it’s own growth. If nothing else, it will make you grateful for the relative ease of your own holiday commute.

MARCH OF THE PENGUINS (2005)
Family. Togetherness. Huddling together against the biting cold of winter. Sounds pretty Christmas-y to me, even if the subjects aren’t specifically human. This beloved French nature documentary contains the perfect image for the elemental nature of the season: hundreds of Emperor penguins locked in a swirling, oscillating scrum to fight off the -100 degree winds of the brutal Antarctic winter. Plus, it’s unlikely any of these penguins have a religious affiliation.

DIE HARD (1987)
I know you’ve heard of this one, but I included it for me because Die Hard is my religion. I can’t be sure of too many things, but I am sure that John McClane sacrificed most of his blood and the soles of his feet so that sleazy German terrorist-thieves might not make off with a bunch of bearer bonds. And he said “Yippie ki yay,” and it was good. Heck, it was awesome.