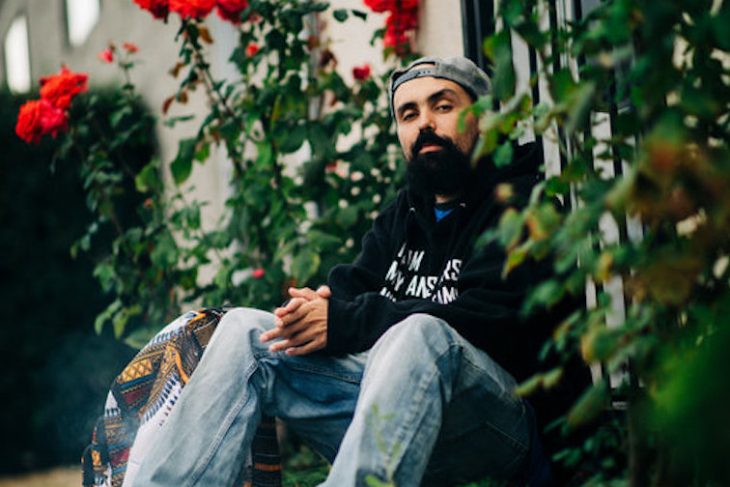 In the late ‘80s and early ‘90s, in the era known as hip-hop’s golden age, Chuck D liked to describe the music as “Black CNN,” a channel of communication for the otherwise disconnected. In the years since, hip-hop became globalized, democratized, atomized and commodified; these days it functions more like Buzzfeed, available to everyone at any time, its once singular tropes and traditions, vocabulary and iconography adopted and diluted across the entire spectrum of popular culture. Amid the noise and fluff, there’s still information in the music, though it’s harder than ever to find.

Think of Gabriel Teodros as Seattle’s CNN. The latest album by the Beacon Hill-born MC, History Rhymes If It Doesn’t Repeat (A Southend Healing Ritual), contains the kind of street-level reporting that Public Enemy so ardently embraced, and it also unpacks Teodros’ personal revelations of the non-political sort, his self-diagnosed failings in love and career and body image. It connects the personal to the political, Teodros’ lived experience to his progressive activism, and it does so with generous intimacy. As a thoughtful, well-traveled hip-hop veteran, not to mention a published author, KEXP DJ, Teodros is a compelling figure, and simply spending time with him through his music feels like therapy. Over jazzy, low-key beats by Teodros’ longstanding production partner, Vancouver, BC-based Moka Only, History Rhymes plays like a social media account that you actually want to follow.

Right from the start, with the album-opening “First Cut,” Teodros goes in deep (and self-aware: “The first cut should be the deepest, right?” he muses), describing a failed romance in anguished detail before arriving at a powerful statement of empathy: “I have hurt, I have healed more than I can see/Every woman that I know has seen it worse than me.” A few songs later, the trifecta of “No Matter How Far You Go,” “Southend’s Own” and “Tout Comprende C’est Tout Pardonner” spans the biographical and observational, internal and international. (The latter, French for “to understand all is to forgive all,” Teodros and guest MC Khingz’s riff on paternal forgiveness, reflecting shades of Snoop’s recent reconciliation with Kanye.) Just when Teodros risks appearing overly provincial he flexes his global awareness, shouting out his Ethiopian roots or his travels in Cuba or European occupation of Salish land. Just when he approaches oversharing or exposing a personal truth too uncomfortable he pulls back to the universal.

In this way History Rhymes is about relationships: individual to individual, individual to system, local to global, Seattle’s relationship to its history and its future. Likewise, Teodros shares the spotlight with a dozen collaborators, a who’s-who of Northwest black music, including Otieno Terry, Meklit Hadero, Julie-C, Shakiah and Nikkita Oliver; egalitarian perhaps by design, none of them shines brighter than the rest.

It’s a team effort of a solo album. Throughout his 15-year career, spanning several musical and publishing projects under a handful of different names and guises, Teodros settled among the artists who embody Seattle’s conscience and, in the process, its memory, and his artistic archive is more important than ever as the city changes faster than the rest of us can keep up with. History Rhymes even features what must be the first-ever bop about the Northwest’s new August reality: “Summer Haze” connects wildfire smoke in Western Washington to leaders of famous POC uprisings around the world, an of-the-moment song that tries to cut through the fog of history.

“Summer Haze” rides over Moka Only’s skittering beat and an eerily stretched vocal—one of the more interesting compositions on the album. Otherwise Moka sets his gear to mellow-mid-tempo and hits cruise control. The lack of musical variety from one song to the next, even as they’re embellished with what sounds like live guitar, piano and trumpet, is the album’s primary shortcoming. It’s like Moka and Teodros found a blueprint in the Digable Planets masterpiece “Black Ego” and followed it to the letter. Which, intentionally or no, illuminates yet another relationship, between hip-hop’s past and its present. But even if the album’s production overlooks the trees for the forest, Teodros never fails to see the big picture.