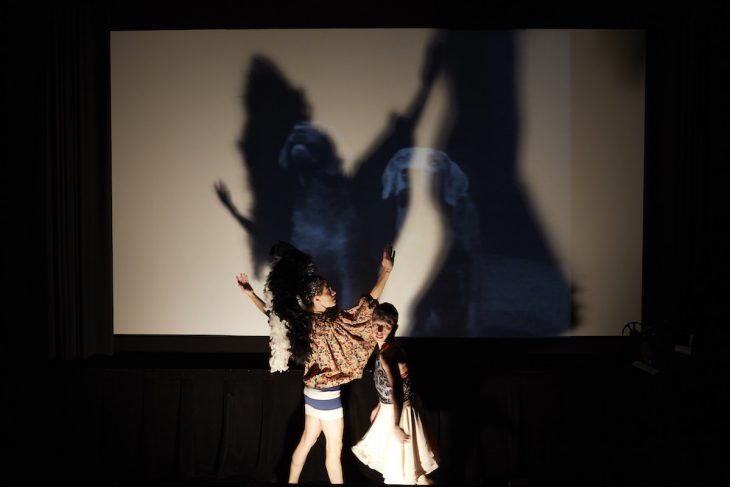 Minutes before a show last weekend, a sudden power outage plunged Northwest Film Forum and the surrounding block into darkness. The audience, waiting anxiously in the dark lobby, was there to see Minneapolis dance duo HIJACK’s series of works made and presented alongside films from Walker Art Center’s Ruben/Bentson Moving Image Collection. After about 20 minutes NWFF director Courtney Sheehan announced that HIJACK was working out a way to present an adapted version of their program, using a minuscule, battery-powered projector and the flashlights on our phones.

Kristin Van Loon and Arwen Wilder, who have performed as HIJACK since 1993, spent years sneaking into the small cinema at the Walker for secret dance sessions. The Walker’s discovery of these clandestine meetings led to a nine-month residency and a slew of dances made with film.

As their first piece at NWFF begins, HIJACK pulls tape decks playing a distorted electronic loop from out of a box. They drag a rolling suitcase across the narrow strip of a stage and prop it open to reveal a tiny, magical projection inside, a miniature world of trees and birds. The dance movements take the form of repetitive fixations—sweeping a foot back and forth, nuzzling into an armpit, bobbing heads and manic sit-ups. Each dancer has their own mysterious agenda of action but they continually return to one another, reaching out almost as an afterthought—a relationship that doesn’t have to be acknowledged because they know it will be there without looking. One of them makes a high, drawn-out eek sound and they pack up their tape decks and owl statue (how did I miss the owl statue until now?) and it ends without fanfare.

For the second piece, “Drum Room Practice Drama,” Miranda Pennell’s film Drum Room plays through a laptop and the portable projector from the suitcase, duct-taped to a tripod. The film tours a white building with cement-block walls and dropped ceiling tiles. Van Loon and Wilder’s movement begins to align with the film in clever, coordinated ways. They crouch low below the projection and as the camera zooms toward the ceiling they stand, effectively placing them in the room of the film.

Other times they play with their scale. Outsized by the projection, a panning of the camera appears to push them across the space. The dance avoids becoming gimmicky because its own playfulness matches that of the film. As the camera scans a seemingly endless line of practicing drummers, Van Loon and Wilder circle one another, connected by two phone handsets and a long spiral phone cord, jumping off the stage, running across the front and climbing back on. The audience audibly delights in the physical nonsequiturs.

HIJACK cultivates a casual aesthetic that leans toward transparency. The duo’s costumes for much of the performance seem to be whatever T-shirt they happen to be wearing. Rather than creating a separate world, their stage presence and unpretentious movement simply invite witness. Because of the down-to-earth vibe, the many technical foibles of the evening altered but didn’t mar the experience. It is part of the live-ness when, still dancing, they asked someone to turn up the audio on their laptop. The audience and HIJACK shared the same smiles and cheers when the lights pop back on toward the end of Drum Room.

Regular projectors now up and running, Trevor Adam’s Release Forms plays without dance accompaniment. The film cuts quickly between seemingly disjointed images—close-ups of a massage, people in a cabin, trees, a dog. Everything is out of focus and the camera moves erratically, creating a disorienting experience that matches well with a clanking, thudding musical score. Sometimes the image is almost entirely obscured by scratches and painting on the 16mm film itself, blooming colorful animations that momentarily eclipse the recorded action. Like HIJACK’s dancing, the images are recognizable but stuck together in a way that seems to intentionally evade narrative.

Finally, HIJACK performs “An Image an Image,” choreographed to Harun Farocki’s An Image, filmed on a German Playboy photo shoot in 1983. As workmen construct a fake fireplace on screen, HIJACK repeats a short series of movements. Wilder crawls on all fours, reaching out with one hand. Van Loon sweeps her arms across her body and then swings one behind her four quick times. The movements seem random for a long while, but then suddenly sync up with the filmed action. A woman reaching to place a glass bauble next to the fireplace. A lightbox being moved into position. A swinging arm caught at the edge of the screen. When the nude model enters, HIJACK shines a bright light directly on the projection, almost entirely obscuring the action of men directing the shot and editing the photos. HIJACK goes about their mysterious, focused movements, pointedly ignoring the film until the moment the model is dressed, when they turn off the light and the deconstruction of the Playboy set is allowed to play out.

While the blending of dance and film in “Drum Room” transports the dancers out of the theater, “An Image” creates a clear separation. The dancers are not inside the world of the film, but commenting on it in real time.

While it’s a shame that most of this one-night performance couldn’t be seen as intended, there was something magical about the less-than-ideal circumstances. Watching the two artists navigate the power outage created a rarefied form of engagement. Humanity thrives when uniting around a common problem, a sense that we’re all in this together.