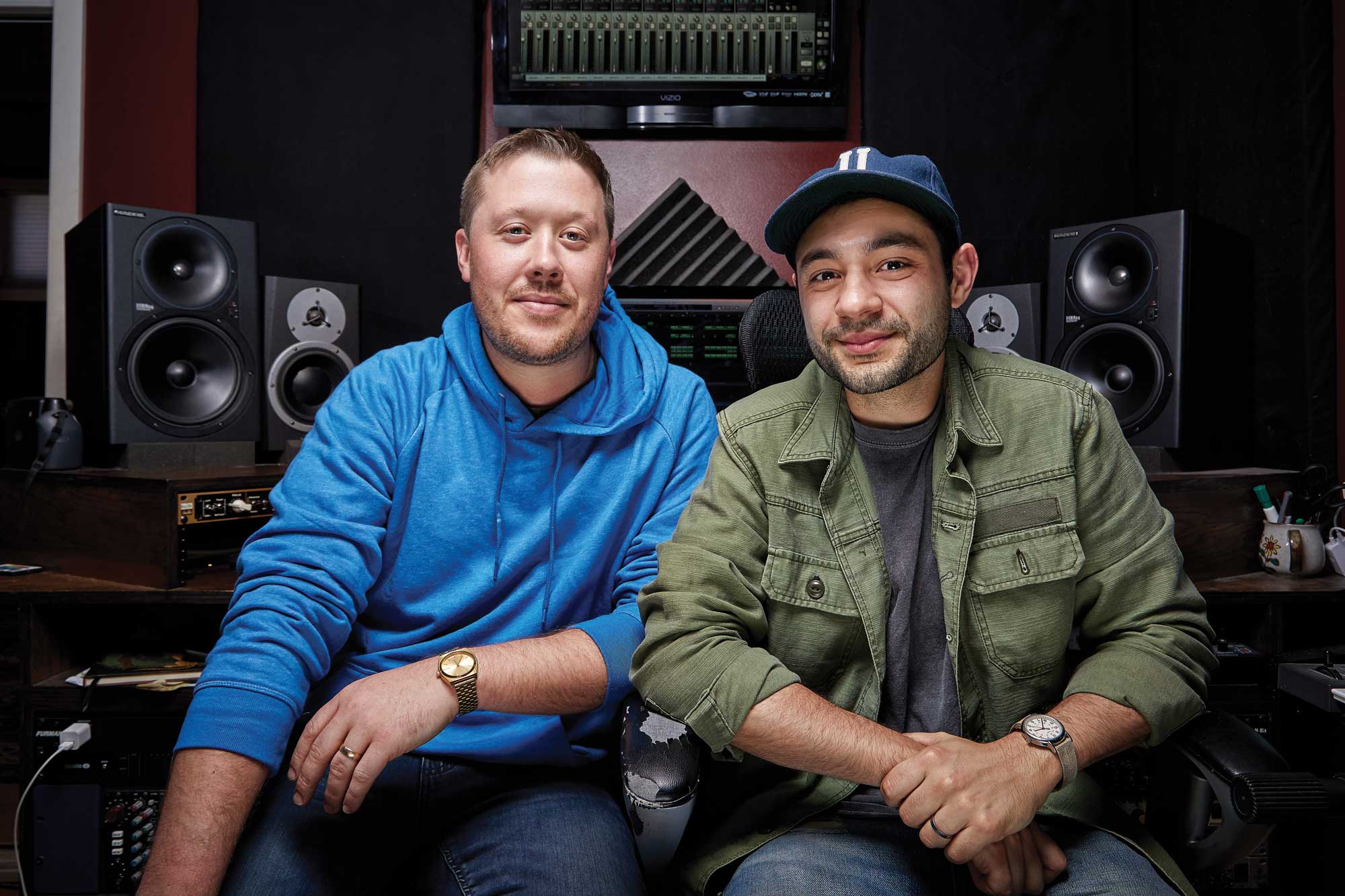 A little after 7 p.m. on a Friday evening in early May, an act of creation takes place in a small North Seattle recording studio, and it crystalizes everything that’s good and right about humanity.

Maybe it’s the springtime sunshine talking. Maybe it’s the mood-boosting music being made, on the fly and in the pocket. Whatever it is, it feels real and if you were here you’d feel it, too. If only we could all dwell in the same easy, honest collaboration as the seven people in this room, joyfully sharing their gifts over cheap beer, strong weed and Skittles as they scratch out the first funk-fueled figures of a song, then we could achieve anything together.

Elan Wright and Nima “Skeemz” Abbassi copilot this laboratory they call the Ruby Room, a former office space attached to a paint company on a surprisingly bucolic dead-end street a block off an unloved stretch of Aurora Avenue. They launched these generative get-togethers—dubbed “Nima Fridays”—back in 2013, when they took over the studio from Macklemore and Ryan Lewis. All that time, some of the best new music coming from Seattle has come out of these 500-ish square feet.

As musicians, songwriters, producers and engineers, Wright and Abbassi have left fingerprints on almost every hip-hop, soul, R&B and electro-pop album, EP and single to come from Seattle in recent memory. Whether or not you’ve heard of Dave B or Raz Simone, these artists and more are bringing Seattle music into the modern era, pumping out elegant, effervescent pop songs that stand alongside any major-label hit factory or celebrity recording studio. Wright and Abbassi are the artists behind the artists, the editors and alchemists who convert raw musical ore into musical gold.

They’re results-oriented, as evidenced by their copious recordings available everywhere online. They’re also concerned with less tangible commodities, like confidence and camaraderie—the foundational elements of a healthy music community. The Ruby Room is the physical nexus of their efforts, an open-door clubhouse for music nerds.

Arriving at this moment inside the Ruby Room took years. Years of jam sessions with dozens and dozens of musicians (several walls inside the studio are tiled with Polaroids of every artist who’s rolled through, 188 and counting). Years of fine-tuning the proper low-pressure atmosphere and cultivating a wide network of singers, rappers, instrumentalists and producers from a fertile but largely unrecognized hip-hop scene. Years to establish an easygoing vibe and dedicated work ethic. After all that groundwork, moments like this—when a blank page transforms into a fully realized, professionally polished song—happen here frequently.

Tonight’s session began with Wright sitting on a stool and strumming on an electric guitar. He called out very loose parameters to Abbassi: “Something upbeat and summery, E minor, G major.” On a nearby desktop computer and flatscreen, Abbassi chopped up tiny snippets of Wright’s guitar noodlings and played them on a MIDI keyboard attached to his Mac, simultaneously adding layers of drums and percussion, tick-tick-bomp. After finishing a phone call with people at Atlantic Records outside in the parking lot, Paris Alexa Williams folded into the mix. Pen and notebook in hand, braids woven into a soft tower atop her head, she scratch-sang lyrics into the air, circling around the song’s narrative.

Maybe a half-hour later, Sol Moravia-Rosenberg knocked on the studio door, strolled inside, dropped a packet of Grizzly Kush on top of a speaker and peered through his metal-frame glasses straight at Williams: “Whatcha singing about?” Williams showed him her notebook and they dove in. Abbassi and Wright continued refining the backing track.

Now things are happening too fast to follow, conversation turning to execution, spurring momentum. Abbassi injects a snare hit that pushes the beat toward a swinging, Latin feel. The melody, which originated with Wright’s guitar transmuted through Abbassi’s keys, suddenly sounds like it’s being played by an accordion. Cool.

A rapper/producer named Nyles Davis shows up with a friend and they take in the proceedings from the studio love seat for a minute before Davis relocates to the adjoining room, dons headphones, cracks a laptop and a notebook and vanishes into his own material. A singer named Dave Chaney stops by; Wright sings him the backup vocals he’s considering. Williams and Moravia-Rosenberg are sparring over lyrics, he the sounding board, she the final say, as they further the narrative: Girl at a party gets hollered at by dude with no game. Girl with her crew, wary of parting ways, especially for a half-assed contender. She’s better than that, she knows it, and she tells him so.

What appears wordy on this page sounds effortless coming from Williams’ lips. She and Moravia-Rosenberg are verbally dancing, discerning cliché and averting it, finding new words to rhyme, telling a story, making it funny, relishing the process.

“I could never pull this off but maybe you can,” Moravia-Rosenberg says, then sing-raps, “I’m not just at the party/I am the party.” The room approves.

Time to track the vocal. Williams steps into the vocal booth, a closet-sized chamber padded with black egg crate foam and lit by a strand of white Christmas lights. Wright shuts off the fans for quiet and Williams sings in earnest, invisible inside the booth but wired for audio in the studio. With each new take she offers a different emotional timbre, fine-tuning lines, words, even syllables to suit Wright’s coaching as Abbassi sculpts the sonics with Logic production software. The song is taking shape, and it’s upbeat and summery, and it goes.

At this point, about two hours after the nothing this endeavor started from, it hits me: The talent on display in this room. The vulnerability. The fearlessness required to walk in here and be brilliant; the humility to take direction and play a role. The degree of trust, of love. People offering everything inside them with no expectation other than mutual respect, all in service of a song.

It’s a rush, a revelation, a wonder. It is a major part of the puzzle that is the future of pop music in Seattle. Wright and Abbassi cultivated the Ruby Room for exactly this purpose, to incubate unfettered collaboration and creativity far from the noise and distraction of the city’s historic artist neighborhoods, and it’s paying off.

With three-quarters of a summer jam in the can, the crew breaks. Soft spring twilight is lingering outside, there’s a beat-up basketball hoop in the alley, and smoking’s not allowed in the studio.

Back in 2010, when Ben Haggerty and Ryan Lewis were spending nights in the studio that would become the Ruby Room while making The Heist, Elan Wright was working at Pottery Barn and Nima Abbassi was getting his degree in Business Administration at University of Washington. Even then, the two were deeply involved in music. They had been most of their lives.

Wright and Abbassi have left fingerprints on almost every hip-hop, soul, R&B and electro-pop album, EP and single to come from Seattle in recent memory.

Growing up in Edmonds, Wright started playing upright bass in middle school. As a teenager he learned guitar, joined a pop-punk band called Danger Radio and got in a van to tour the country for a couple years. At that point, having dropped out of an Olympic development program for soccer and upending his physician-parents’ expectations, he was all-in. Abbassi had played drums in his garage and in bands around Bothell for years and dedicated his high school senior project to creating a beat tape. Before heading to UW, he got an Associate’s Degree in music production from Shoreline Community College, where he first delved into music theory, piano, production and Logic. He was also playing drums in prog-rock group Spyn Reset.

The two were first acquainted through a mutual friend who passed an Abbassi beat tape to Wright. At that time Wright was working out of the bedroom of his U-District apartment, charging rappers $20 an hour to record and mix their stuff—a new career trajectory that signaled the end of his tenure at Pottery Barn. He planned to rap on Abbassi’s beat tape himself. Instead the two met up and discovered they were using a lot of the same gear. Through another mutual friend, they were both drafted into Moravia-Rosenberg’s band the Zillas and performed with him at the 2010 Capitol Hill Block Party. They started producing beats together, a few of which made it onto Moravia-Rosenberg’s 2012 album Yours Truly. So began a fruitful friendship.

After the success of The Heist, Haggerty and Lewis were ready to relocate. Abbassi found their Craigslist ad for the space and Wright had played bass on the hit album—his platinum record is hanging on the Ruby Room wall—so they were a lock to take over the lease. After meeting the owner of the building, a music fan who operates the adjacent JT&A Painting, they moved in, rearranged the layout (but kept the vocal booth Lewis built with his dad), painted the walls and rechristened the space. They don’t have a bunch of specialized, expensive equipment—though Wright is especially proud of their 1977 Rhodes Mark keyboard—just the key components necessary to nail a rich, live sound. Besides, the essential factor isn’t the gear. It’s the people using it.

These days Abbassi is a program manager at Amazon by day while Wright, who quit his Amazon job a couple of years ago, works out of the studio full-time, recording, mixing and engineering clients from across Washington state. They come together at night to focus their creative energies, especially during Nima Fridays, which often take over entire weekends. Their diligence leads to a prolific output, and in a relatively short amount of time their energy and expertise have become the foundation of Seattle’s current hip-hop generation. Recent credits include Dave B’s Pearl, Kung Foo Grip’s 2KFG, Real Don Music’s The Dank Zappa EP, Sam Lachow’s Motels & Minivans EP, J’Von’s Spacesuit and Macklemore’s Gemini plus upcoming releases by Parisalexa, MistaDC, Travis Thompson, Brothers From Another and Sol. With Abbassi on drums and sequencer and Wright on bass and guitar, they recently began recording neo-funk themselves and playing shows as Nile Waters. Don’t sleep.

If you’ve yet to come to terms with Seattle’s status as a hip-hop city, now’s the time.
The genre has always maintained a toehold in Seattle, a presence overshadowed by the city’s rock ’n’ roll reputation. From the beginning the scene has fostered record labels, production houses, management and promoter types, all toiling in their respective corners, stylistically agnostic, beholden to the music and the community and the desire to rep them with integrity. For whatever reason—and with a clear few exceptions—the music hasn’t broken beyond its hometown-hero status. Things are finally, definitively changing.

Consider the fact that over one weekend this past December, the city hosted two sold-out Macklemore shows at Key Arena, a sold-out Shabazz Palaces show at Neumos and two sold-out Sir Mix-a-Lot shows at Nectar. Each featured local openers. All told that’s around 34,000 tickets sold over two days by about a dozen acts that demonstrate the full spectrum of Seattle hip-hop. Many of those acts—and several more—have toured the U.S. this year, bringing Seattle hip-hop to the rest of the country.

“Thousands of people are moving into the city,” Wright told me during that Nima Friday. “It’s a really cool opportunity for the musicians in Seattle because there’s all these new ears.”

For the first time in ages, a fledgling label called Crane City Music is producing gorgeous vinyl records for Seattle hip-hop artists. BuildStrong, an artist management and concert promotion company, is nurturing careers and developing events that garner massive popular attention in Seattle and beyond. Venues large and small consistently sell out local hip-hop nights. Street Sounds, KEXP’s long-running hip-hop show, moved to a prime Friday night slot. And the Ruby Room is the community’s low-key locus, an incubator of music and an IRL social network expanding outward, one Friday night at a time.