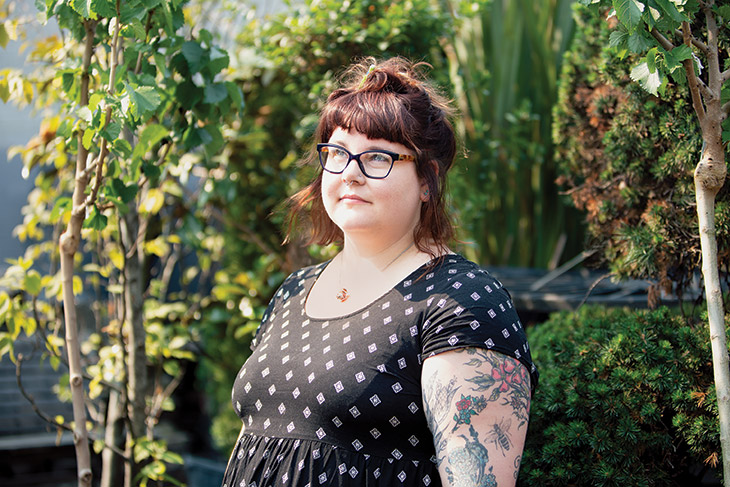 Maggie Rogers is drawn to the weird, the surprising, the supernatural. Our recent conversation touched on her Bigfoot ideas and the immersive ghost story she once staged in a school basement. After growing up in Louisville, Ky., home to the annual new-play extravaganza Humana Festival, Rogers made her way to Chicago, then came to Seattle to be the literary intern at Seattle Rep three years ago. She’s now a company member with The Horse in Motion, dramaturg for Cherdonna Shinatra’s company Donna and literary manager of Washington Ensemble Theatre, where this fall she directs Sheila Callaghan’s Everything You Touch. The play flits back and forth in time between two amorphously connected storylines: Victor and Esme building a fashion empire in the 1970s, and Jess, a modern young tech worker reckoning with a painful past.

Were you advocating for WET to do this play before you came on as director?
Oh yeah, I love Sheila Callaghan’s work. I’m from Kentucky and lived in Chicago and I always feel like I’m the loudest, most opinionated person in the room in Seattle. I don’t mean it as a bad thing—it’s good and bad. It’s how I was taught to express myself. I identify with so many of her characters because I feel like that: an unapologetic, loud, takes-up-space type of person, and Seattle needs to see characters like that because we’re very…I don’t know what to call it. Sensitive?

Do you ever have to pack away an emotional response to “bad characters”?
Every character in a play is lovable and has a quality about them that needs to be written about or else they wouldn’t be in the show. Looking at Victor, he can be completely written off as an asshole, but I love him because he’s a person who’s combatted intense trauma and doesn’t quite know how to communicate with people. He has this huge theme in the play of being immortal—he wants a legacy that he knows he can’t have without doing something incredible—because he’s a shell of a person who’s broken and faking it.

You’ve done a lot of brand-new work. Is it harder or easier to work on a finalized script?
I love it. Sometimes the best work is made with parameters. I had a teacher who said that being a director is reminding the audience where the flow of life is in the play, and I love that so much. As a director you always have to have a strong point of view, and bad directing is when you force that point of view onto a play where it’s not needed. This script is really in my wheelhouse in terms of conversations about bodies and body positivity. That’s something I’ve been exploring a lot and getting some recognition for recently, which is cool and also shocking, because why is the idea of not finding fat people disgusting a shocking thing? But it is. There’s a line in the play that I love so much: “Take the things that destroy you and own them.”

This play subverts tropes about women, but still hires mostly women who look like models. Do you find that infuriating?
That’s a great question that I might never have the answer to. Why I’m persisting in doing it is Sheila’s unapologetic voice, and showcasing women who are unconventionally feminine. Even Esme, who’s supposed to be this beacon of beauty, is still a bad, hard bitch. She’s not submissive, she works her ass off and I love that about her even though she’s like the floaty pretty one. Sheila just lets people be ugly on stage, ugly in terms of emotion and the raw, visceral moments that she writes so well.