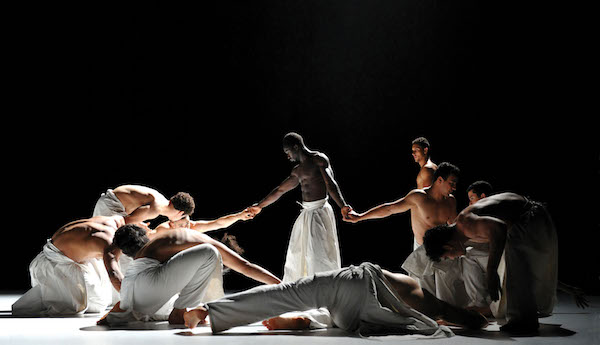 When choreographer Hervé Koubi was 25, his father revealed that their family’s ancestry was rooted in Algeria, not in France, where Koubi grew up. Both an emotional blow and an awakening, this newfound knowledge opened a door for the young choreographer—he had a new history, culture and artistic influences to draw from in his work. Comprised of 12 French-Algerian and African male dancers (many of whom Koubi scouted as street dancers), La Compagnie Hervé Koubi made its Seattle debut last night at Meany Center for the Performing Arts with What the Day Owes to the Night, a highly physical work that waxes and wanes in rhythm, energy and complexity, celebrating the male dancer wholly and completely, not just as a support mechanism for his female counterparts—a role we’ve grown accustomed to seeing in classical ballet.

Much like Koubi’s mid-twenties revelation, What the Day Owes to the Night opens with an awakening. The 12 company dancers, bare-chested and clad in white pants with a skirt-like overlay (costumes by Guillaume Gabriel), lay clustered in the center of a large white vinyl square. The lighting is low, the music slow and hazy, with light percussion and tones like deep chimes. The men begin to stretch their arms and torsos, to reach their limbs up and out with smoothly rolled shoulders. The dancers don’t rush as they make their way from the floor to kneeling and eventually to standing. The pace picks up and the group disperses, stretching into graceful movement full of athleticism—kicks, shoulder spins, backflips—that mix martial arts, hip-hop, contemporary dance, ballet and more.

What the Day Owes to the Night elevates forms of dance often seen as “street” or “urban” (and thus not as “high” an art form as, say, whitewashed classical ballet), against a pre-recorded mix of music that includes J.S. Bach, opera and the Kronos Quartet. The powerful piece puts dark male bodies on display, showing off masculine forms and athleticism, while also teasing out a powerful vulnerability with quieter moments: two men holding hands walking together downstage, the group carefully catching a man as he falls out of a lift.

The dancers weave in and out of the work’s different sections. Sometimes only a couple of them perform while the rest watch from the perimeter of the white square, and at other times they work as an ensemble, the music exploding loudly, their synchronized choreography both detailed and bold. The slower parts dragged a bit—but that could have to do with wanting to see more of the company’s impressive, fast-paced acrobatics and balance play. In one section all 12 dancers ended up spinning on their heads, the white skirts of their costumes splayed like flower petals—possibly a hint at the notion of familial and culture roots that weaves throughout Koubi’s work.

At the very end, one of the dancers recites a short Arabic poem titled I Went There, written by the choreographer in “the language of our great-grandparents.” Even with a language barrier the words are strong and clear and non-apologetic. We may not understand the message literally, but Koubi is making a statement by putting his voice, the voice of a marginalized people (and not fully translating it for the mostly white, English-speaking audience) out on stage. It’s a powerful move that matches his skill and heart as a choreographer.

What the Day Owes to the Night runs through April 15. Tickets here.