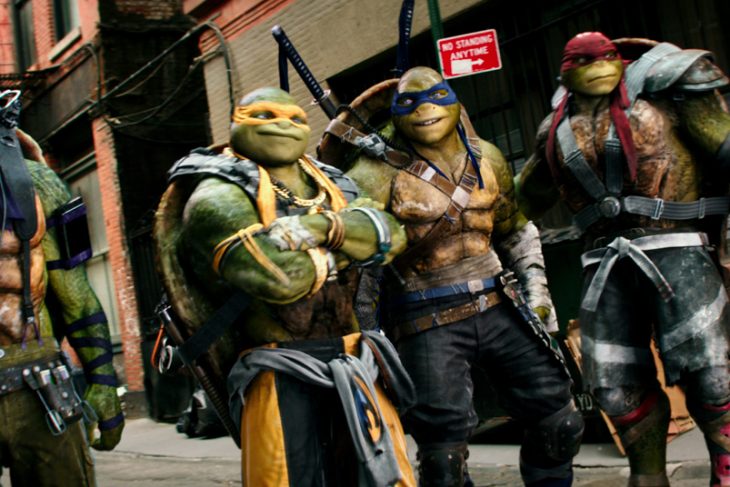 A quarter century ago, the original Teenage Mutant Ninja Turtles movie lodged a quartet of crime-fighting reptiles into the postmodern pantheon of American mythology. The 1990 film follows four teenage turtles—famously named for Italian renaissance painters—who are adopted by an empathic rat named Splinter that trains them in the martial arts.

As accidents of a biogenetic mishap that gave them the ability to fight with unsurpassed stamina, the turtles war with the Japanese supervillain Shredder who has indoctrinated droves of New York City castoffs into carrying out his criminal enterprise. “This is your family,” Shredder tells his recruits in a decidedly Darth Vader-ish drawl; “I am your father.” Referential lines like these announced the arrival of a new blockbuster franchise that has become as formidable as Rafael’s bulging biceps, Leonardo’s leadership acumen, Donatello’s technical wizardry and Michelangelo’s comic timing.

Riding the commercial success of an engaging cartoon and a lucrative line of action figures, Teenage Mutant Ninja Turtles parlayed Peter Laird and Kevin Eastman’s menacing mid-’80s comic book into a Jim Henson-assisted parable about social misfits and makeshift families. The ninja turtles were the heroes that Reagan/Bush-era America deserved.

While consumer spectacles like the Teenage Mutant Ninja Turtles washed over children on television, adults enduring wage stagnation in the ’80s and ’90s were at work, laboring longer hours for lower pay. Women entered the workforce in record numbers, men came to unlearn the burden of being sole breadwinners, and divorce rates rose. Teenage Mutant Ninja Turtles resonated because it was released in an era when the idea of family was in unprecedented flux. Splinter—a single parent in a world suddenly full of them—did more than raise four “heroes in a half shell”; he was also something like a surrogate grandparent to millions of ’80s babies.

But the Millennials who sucked cultural succor from the teat of ’80s entertainment are now old enough to have families of their own. And the Teenage Mutant Ninja Turtles—poster children for the arbitrary fame of youth-focused entertainment—have grown up as well. After a stillborn cinematic reboot in 2007 and a juvenile cartoon revival in 2012, the turtles hit the silver screen again in 2014’s Teenage Mutant Ninja Turtles to celebrate the 30th anniversary of the original TMNT comic.

Released June 3 as a collaboration between Nickelodeon Movies and Michael Bay, Teenage Mutant Ninja Turtles II: Out of The Shadows is a sequel that picks up where the 2014 movie left off. The film carries the torch of a franchise that hasn’t aged so much as it has decayed.

Out of the Shadows seems to be based in large part on a 1989 episode of the TMNT cartoon series called “Take Me To Your Leader.” In that episode, it’s up to the turtles to save planet earth from Shredder’s plot to siphon off the sun’s energy—a force equivalent to a trillion separate one megaton bombs—into four milk carton-sized batteries. Whacky bioterrorism figures prominently in Out of the Shadows, as does a crisis in leadership that threatens to dissolve the four turtles into an incoherent band of violent freelance vigilantes. Through the expected explosions and convincing aerial stunts, the film’s parallel structure begins to emerge midway through the feature: As the social fabric of Shredder’s criminal cohort frays, the bond tightens between the turtles, a crooked corrections officer and an ambitious reporter. A battle royal atop New York City ensues between the resurgent reptiles and a disembodied brain named Krang, who bares an unfortunate resemblance to a soggy scrotum.

At this point, we have to ask: Is Donald Trump the Michael Bay of politics?—a purveyor of spectacle who grows stronger and stronger with criticism; who would pimp Gabriel’s trumpet at a pawnshop in exchange for a cheap glimpse of Megan Fox’s midriff; who believes, as Al Jolson once said, that there is nothing as perverse as an audience in need of entertainment?

With Out of the Shadows added to a resume that also includes Bad Boys II and Transformers, Bay has a track record of producing the finest America has to offer in the genre of Late Capitalist Largesse. The seemingly inspirational story of self-acceptance and family ties in Out of the Shadows comes with a substantial dose of cynicism: Here—in Bay’s vision—is a bioterrorist epic where the armed forces, elected officials and the brilliant minds of America’s research universities are nowhere to be found. When pictured at all, the general citizenry is reduced to yelping masses who scramble to make way for the giants they encounter: basketball stars, villains like Shredder and Krang, and the heroic turtles who serve as their unelected moral proxy. When Krang says “teams are for the weak, family is for the scared,” you can feel the fascist ethos writ with words and slime.

Although the turtles were homeschooled by Splinter in the sewers of New York City, the exceptionalist logic of American individualism has trickled down to them. In the 2014 version of Teenage Mutant Ninja Turtles, Splinter admits that the turtles were “drawn to pop culture” at a young age. Out of the Shadows finds them questioning the values of a society that demands them to repeatedly save a world that can’t accept them. Their quest to rescue America from itself has taken a considerable toll on their clearly PED-addled physiques. And their extra-legal approach to justice has alienated them from the public at large. They are persecuted by NYPD officers who cannot see past the color of their skin. By accepting the challenge of being superheroes, the turtles affirm the unfixable brokenness of American society.

“Every superhero has a sad story shaping his or her heroism,” writes Roxane Gay in her 2015 book Bad Feminist. But in Teenage Mutant Ninja Turtles, the sad story is ours. The film finds the American family in need of an impossible deus ex machine to get its house in order. Teenage Mutant Ninja Turtles ends on a philosophical note, with reporter April O’Neil asking “Do we need to give our heroes a name and a face, or is it enough to know they’re looking out for us from the shadows?” O’Neil should have gone a step further and asked why we need heroes at all.