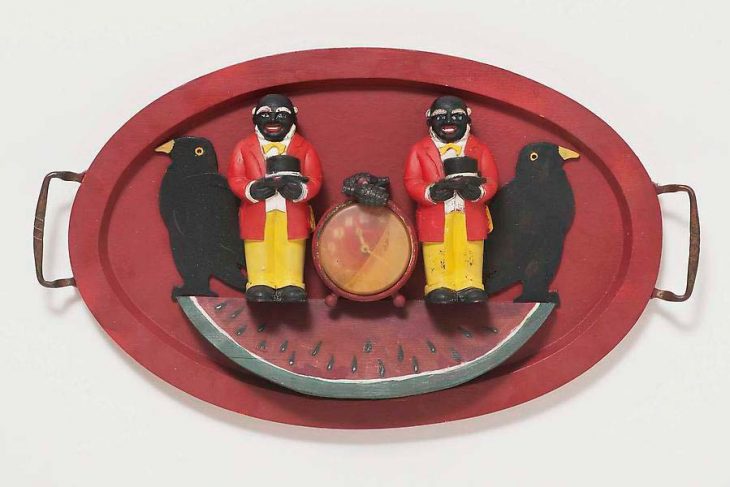 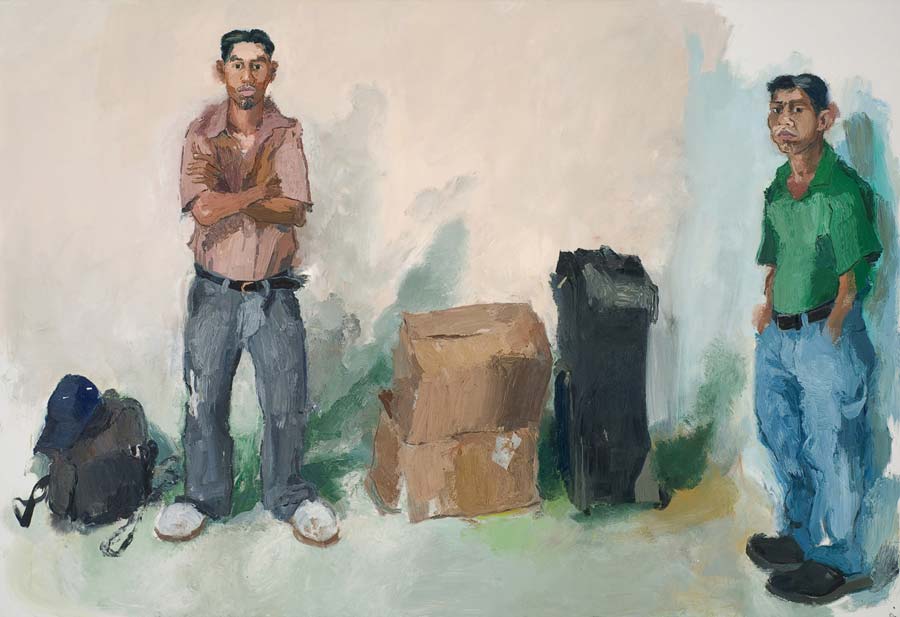 Francisco, Raul, Saul, Lorenzo and Miguel Antonio cross their arms or hide their hands in baggy jeans as they stare at us nonchalantly from large, dense oil paintings on the walls of Greg Kucera Gallery.

LA-based artist John Sonsini has been painting Latino day laborers for decades. He meets them in his neighborhood and pays them a daily wage to sit for him in his studio; the workers typically pose five hours a day with breaks every half-hour. Life-size and commanding in broad brushstrokes, the paintings are impossible to overlook.

A demographic that might be described as “overlooked” form the spine of ¡Cuidado! The Help, a group show focusing on America’s domestic workers and low-income laborers. It’s a challenging show. Without holding our hand or drawing clear conclusions, The Help traces the myriad ways in which labor is deeply rooted in issues of race, class and gender, which in turn unfolds a violent history of capitalism and damning stereotypes.

“America has a long history of getting its very hardest, least pleasant and most dangerous work done by the ‘other,'” writes curator and gallery owner Greg Kucera in his exhibition statement. “Whether American citizens who survive at the lowest rungs of the economic ladder, or live precariously as migrants or immigrants, or as slaves brought here against their will, there has always been a class of worker forced to do work other Americans will not do.”

According to the nonprofit National Domestic Workers Alliance, two million workers tend to homes and families in the United States, most of them immigrant women and women of color. In “Maria TV,” a video beaming through a small screen next to the gallery entrance, Chilean-American multimedia artist Rodrigo Valenzuela displays the struggles of this underrepresented group. For the piece, Valenzuela—himself a former undocumented construction laborer—hired domestic Latina workers from the hotel industry to perform the role of housekeeper as portrayed in movies and telenovelas. 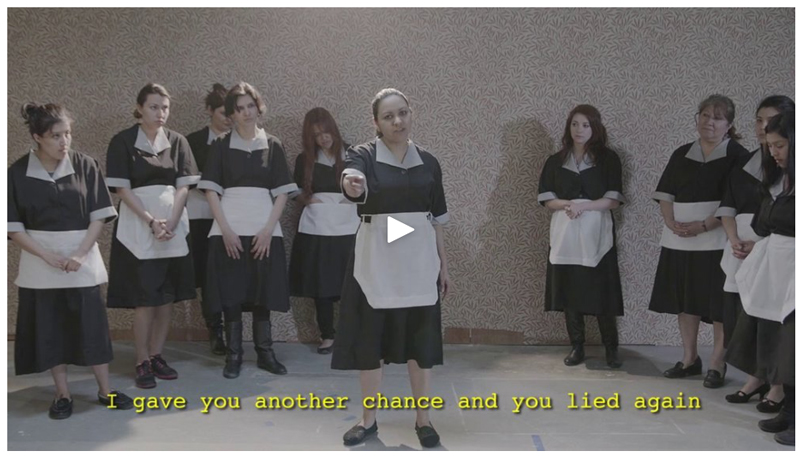 I feel that I am a strong woman for everybody else, one of the women solemnly proclaims. But when it comes to protecting myself, I feel that I don’t fight enough; and I feel that I am strong because I arrived to this country knowing no one, and like many others, I encountered a country that has a lot of racism.

While the women, who are dressed in generic black-and-white housekeeping uniforms in front of green screens, seem to revel in the acting, taking pleasure in delivering the lines, these given roles are also constraining. Their story is familiar yet does not entirely belong to them, or is at least framed, cut short and limited to a few melodramatic phrases penned by another. By blurring fiction and reality, Valenzuela demonstrates how capitalism, labor and clichés held up by popular media play into different forms of confinement.

Lacking the experience of menial labor and/or migration himself, New York-born Sonsini presents a problematic position. He paints Latino laborers, thereby inserting them in a white canon that has otherwise ignored them—potentially a political act. But Sonsini also re-enforces the narrative of white privilege that pays a laborer who will not reap any long-term benefits from the project. Other artists in the show, such as Ramiro Gomez, Juventino Aranda and Roger Shimomura, have different experiences.

Gomez was born in California to undocumented-immigrant parents who were working respectively as a janitor and truck driver. More than his short-lived art studies at the California Institute of the Arts, Gomez’s heritage and his experience as a live-in nanny with an affluent family in Hollywood inspired him to insert domestic workers into luxury landscapes by bringing them literally to the foreground. Gomez modeled his famous work “Lawn Maintenance” (2014), displayed in the show, after David Hockney’s “A Lawn Sprinkler.” Like Hockney’s bright-hued original, Gomez paints a popping green lawn under a California sky, a modernist house in the background. This time, a person of color tends to it. No anonymous sprinklers water this upper-class Eden. Even more compelling are four small collages on the neighboring wall. In them, Gomez inserts maids, nannies, gardeners and janitors on shiny advertisements taken from lifestyle magazines, implying the luxury sector and its imagery are as complicit as the art world in keeping them from view.

Aranda, hailing from a family of migrant workers in Eastern Washington, takes up the exploitation of Mexican culture in “Pale Horse y Hombre,” a sombrero-wearing garden gnome in white cement. Not unlike the Jeff Koons sculptures this work nods to, the piece feels flat, its meaning stuck between parody and pastiche.

The pastiche is more damning in the graphic acrylic of “Broadmoor Gardener” by Seattle artist Shimomura, who often reclaims stereotypical depictions of Asian bodies by exaggerating physical traits. Here, Shimomura reflects on the time he was gardener for the wealthy in Broadmoor. He would cut his classmates’ grass as they sat around the pool and mocked him. Flecks of sun dart on the pool and glint through white bikini-clad bodies and Shimomura himself, pushing a lawn mower dressed in traditional Japanese worker’s clothes. In his painting, Shimomura becomes the caricature of their making. 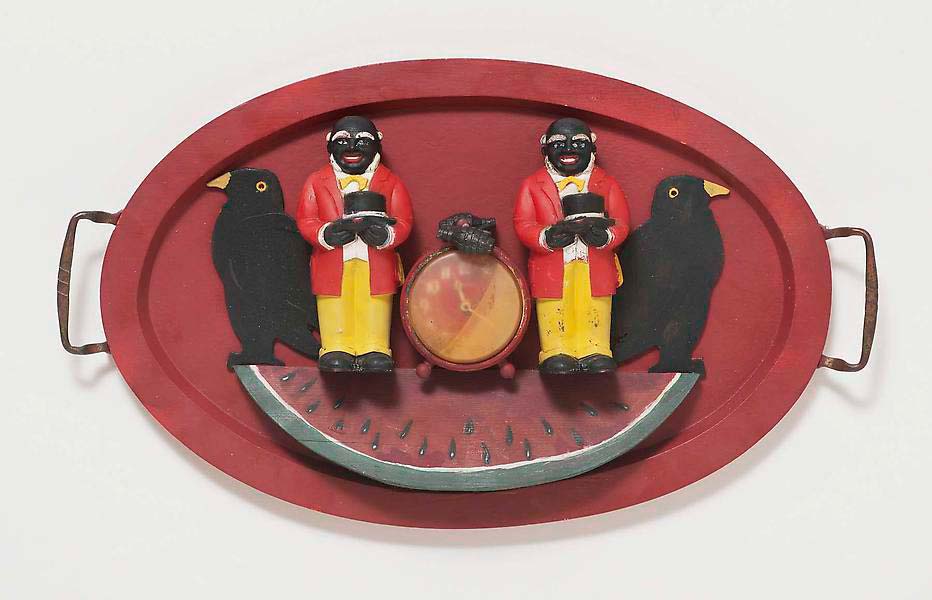 Betye Saar addresses caricatures to similarly confrontational effect in her mixed-media assemblages on serving trays. In the ’60s, Saar began amassing collectibles such as salt and pepper shakers from the Jim Crow era—when race-segregated job economy limited most of the Black population to the lowest-paying, low-status jobs. These collectibles depict famous racial caricatures like Uncle Tom and Aunt Jemima. Saar’s sarcastically titled “Gone Are the Days/The Best for Domestic Use” bears a Mammy caricature, depicting the stereotype of the Black woman who worked as nanny and housekeeper, her wide smile suggesting soothing consent. This racist memorabilia proliferated in the ’60s as a means for revisionist historians to downplay racial oppression and slavery, but the fact that similar images persist even now (the Fremont Fair incident being one recent example) is proof that there’s more work to be done on the part of the powerful.