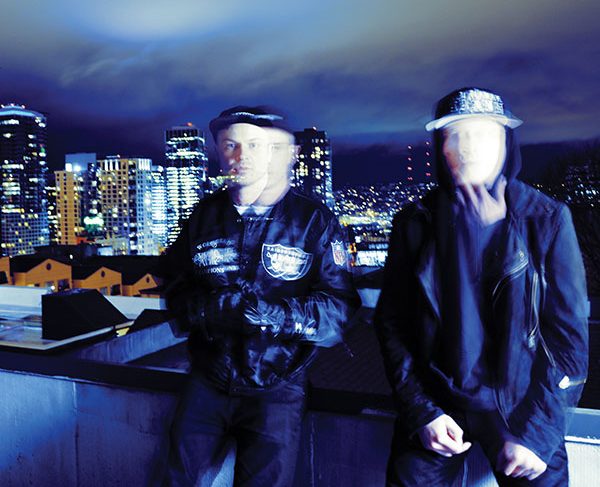 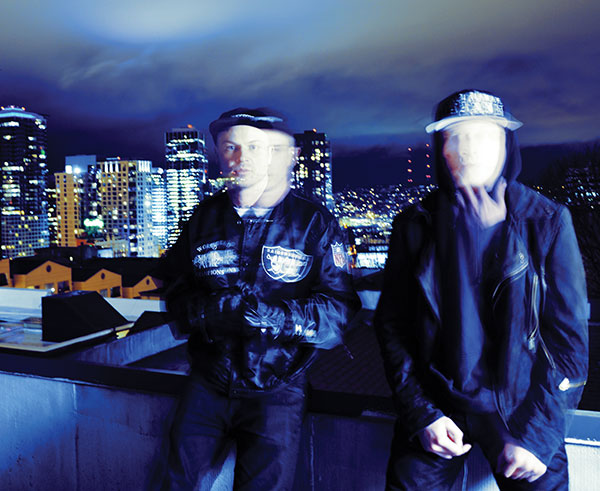 Blue Sky Black Death brought a wave of darkness to hip-hop’s sunny landscape. Now everyone wants under their umbrella.

In his West Seattle apartment,Kingston Maguire streams video of his new stage-lighting gear. Diffused lasers swirl and mutate in a foggy glow on his computer monitor. Maguire’s eyes never leave the screen.

Maguire’s group, Blue Sky Black Death, leaves for its first national headlining tour in a week. Around him, the exigencies of road life dominate the room. Cardboard boxes burst with CDs and band merch; cut-and-sew tees from his street-wear line, Life of Villains, drape over armrests and clothing racks. Laser rigs, smoke machines and a laptop lay packed in the corner. Under his black snapback cap, Maguire exudes a sleepy confidence, an utter lack of surprise.

The three-month tour will support Glaciers, Blue Sky Black Death’s fourth album. The beatmaking duo, made up of Maguire and Ian Taggart, is best known as hip-hop producers for local and national MCs but reserves its solo work for a more expansive and enigmatic sound.

“I don’t think our music is necessarily danceable, but there’s a conscious decision to make it head-nod-able,” Taggart says over the phone from his home in Oakland. The vocals, courtesy of collaborations with Child Actor, Lotte Kestner and JMSN, swim in the mix and surface periodically; like voices in snowfall, their words are deadened, identifiable only in spurts. “We’re more concerned with the textures than we are with the lyrics.”

Glaciers was completed over a rigorous two-month stretch. With Maguire in Seattle and Taggart in Oakland, the two used Dropbox to send files back and forth, texting and talking on the phone to make decisions up until the last moment.

For the rushed pace of its creation, Glaciers projects patience. Five songs span an hour. Eleven-minute lead single “II” starts as a hook-heavy pop song before Child Actor’s vocals are severed, pitch-shifted and rearranged for an impressionistic outro beat. The stitch-work vocal textures of “V” devolve into ambient sludge in the second minute, then triumph in the tenth. Throughout the record, slow-morphing movements belie the churn  of their icy-blue components; they lull then erupt, evoking wide-screen views of nature’s most ethereal landscapes.

This is music for exploration, travel. The album is BSBD’s most ambitious, but the sound is one the group has been cultivating for years. After a decade of refinement, today the group finds its sound in high demand.

“Now we’re on time instead of ahead of our time. Now the sound we’re doing is popular,” Maguire says with a trace of indignation. “We’re not really doing anything different [than we were].”

But for BSBD, change is ingrained: change in locations, record labels, genres, collaborators, fan bases. The duo first met online in the early 2000s. Maguire was living in Hawaii, having left Toronto to avoid arrest, while Taggart lived in San Francisco. They began working together in 2005,when Maguire moved to the Bay Area. By 2006, when Mush Records put out their first album, A Heap of Broken Images, Maguire had already moved to Seattle.

A double album, Images laid the pavement for the group’s genre-confounding future. One side featured forward-thinking instrumental music, the other, beats for underground hip-hop giants like Myka 9, Guru and Pep Love. The project received positive reviews, leading the group to sign with Babygrande Records.

On Babygrande, the group released a second instrumental album, Late Night Cinema, and produced records for rappers, including Jean Grae and Wu-Tang extended family members Hell Razah and Holocaust. After a harrowing experience working with the eccentric Holocaust and label miscommunication that led to Grae’s discontent with the album, BSBD turned its attention to pop-leaning pairings with indie-rock vocalists.

“We were tired of rappers’ egos,” Maguire says. “We approached rappers that we respected, and we actually had a decent buzz at the time, and they would ‘little homie’ us.”

These records, along with 2008’s Slow Burning Lights, the group’s last on Babygrande, and 2010’s Third Party, its first on Fake Four, Inc., further developed BSBD’s layered constructions of samples and synths. Although the albums garnered positive press, the buzz never reached the critical mass necessary to make music a full-time job.

In 2010, Taggart joined Maguire in Seattle. For two years they lived and worked together in First Hill, but remained distant from the local music ecosystem. Up-and-coming hip-hop acts were orbiting around them and establishing a diverse, talented, cohesive community—one they felt no compulsion to join.

“I always tried to avoid being part of the scene,” Maguire says. “It’s like a circle jerk of people that want to be famous in Seattle and they’re all friends. I moved to Seattle because it was cheap as fuck compared to the Bay.”

Outsiderism is often the rallying cry of bitter artists—the last stand against their own failure, the dying breath of delusion. Not in this case. In fact, BSBD found itself architecting a burgeoning hip-hop scene focused on inclement beats and bleak themes. The group’s role as stylistic instigator started in earnest when Maguire struck up a friendship with Seattle MC Nacho Picasso.

The tatted, often shirtless Picasso deploys ignorance and intellect with crass charisma. He and Maguire hung out for two years before ever talking about music. It just didn’t come up, and Maguire’s snobby high art and Picasso’s brash flagrance did fine without each other. At one point, Picasso asked Maguire to help mix one of his early mixtapes. Maguire shared the mix with Taggart, and the pair started sending Picasso the cavernous, baleful beats that eventually became the collaborative album For the Glory. It was the first time BSBD had put all its creative energy into another artist.

For the Glory was a brooding counterbalance to Seattle-centric summer-barbecue rap. Its drugged miasma was vivid enough that you could almost smell the blunt burning. Picasso’s nerdy antihero wielded a bottomless cache of pop-culture references and dared you to question him. His reckless, entertaining escapism revealed a lurking human pain. Young people were drawn to Picasso’s portrait of Seattle as America’s suicide capital.

“No one was doing that sound before we came up here,” Maguire says. “Everyone was doing boom-bap [traditional, sample-centered beats], and as soon as our sound got popular, everyone started doing this dark, menacing shit.”

The album sparked a flurry of productivity. Maguire bought a camera and taught himself to edit. His videos feature slow shots and quick cuts—“I approach it exactly like the music,” he says—centering Picasso over a barrage of flickering images. BSBD released two more albums with Picasso and collaborated with rapper/producer Key Nyata and Skull & Bones, a group made up of young Seattle MCs Bolo Nef and Caz Greez. They ushered darkness into a scene that was sunny with Macklemore’s glow.

“We never understood why most rap sounds so happy in such a gloomy place,” Taggart says. “It just made sense for us to make dark stuff. After we put out the shit with Nacho, we learned that there’s a lot of other people who feel the same way, and they connected with it. It reintroduced us to a different, younger crowd. It put us on the map to more of the new-school rap scene.”

BSBD’s association with Picasso introduced new fans to their music, but it also obscured the group’s history. BSBD was lumped into a buzzing new crop of producers that privileged spaciousness and synths over samples and breakbeats—something BSBD had been doing since 2008.

“I do feel like there’s been a disconnect in our narrative,” Taggart says. “A lot of people aren’t aware of the old shit we did, which is fine. I just don’t want to be a part of some umbrella that we didn’t start.”

To better define their aesthetic, the group began tagging their sound as “glacial.” Glaciers is the clearest incarnation of that sound. If most listeners, unaware of the group’s history, consider this album BSBD’s big debut, that’s fine. Says Taggart, “Especially with rap, people are so fickle. Maybe you don’t want to be viewed as being around forever.”

After eight years of balancing full-time jobs with a slow-growing music career, Taggart admits he’s been tempted to quit at times. “You need to be a little bit delusional to keep pushing yourself,” he says.

I suggest the same thing to Maguire in his apartment. He leans back, pausing for a moment.

Two singles from Glaciers have been covered by major outlets such as Vice’s music blog and Wired magazine, and have wracked up more than 35,000 plays on Soundcloud. For a group whose career spans three record labels, more than 10 releases and the Internet’s first generational shift, the validation must feel overdue, exhilarating, right?

“Being unrecognized for so many years,” Maguire says, “I don’t hold recognition in that much regard. I think we’ve always been good.”