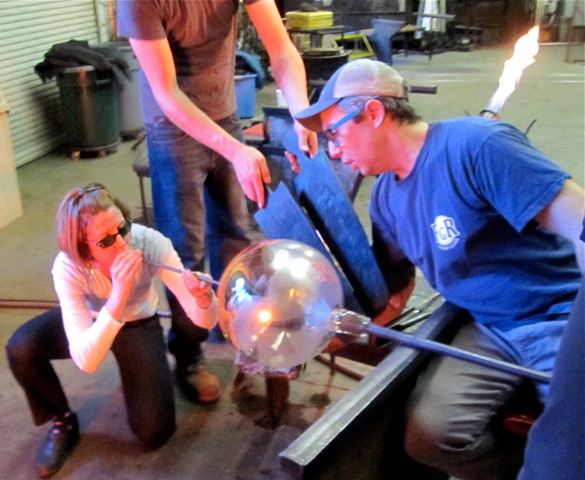 Julie Conway first handled hot glass in her early 20s, inside an old adobe house in Taos, New Mexico. After growing up in Denver and studying Art History at the Institut Américain Universitaire in Avignon, France, she moved to Taos in the late 1990s with a Frenchman whose family owned a ski resort. At the time Conway worked in metalsmithing and jewelry, and she found herself deeply embedded in Taos’ tight-knit creative community.

“One day this stereotypical Taos hippie came up to me in the yogurt aisle at the co-op and he goes, ‘I have a huge order of glasswork, you need to come help me with the production,’” Conway recalls. Taken aback but intrigued, she told him she’d never worked with the medium before.

“You work with your hands and fire don’t, you?” he asked. She nodded. “Well, that’s all you need. You have the skill for this.” A few weeks later Conway blew her first blob of molten glass. She was transformed.

“I knew that I was ready to set out on this journey into glassmaking,” she says. By 2003 she’d founded Illuminata Art Glass Design in Santa Fe and worked there—and at schools and hot shops around the world—before moving to Seattle in 2011. 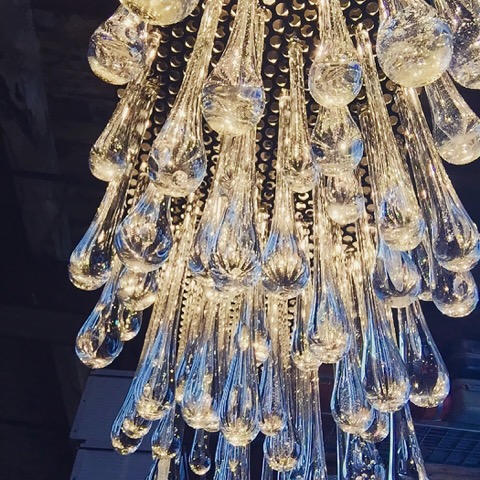 Glassmaking is historically a male-dominated field, especially in Europe where some families could trace their glassmaking lineage back nearly 1000 years. The Northwest gained traction as a major glassblowing hub, thanks to the likes of Dale Chihuly, William Morris and Benjamin Moore. Conway describes glass as “a secretive form,” and during her formative years with the craft, there was very little information available to the neophyte. She was determined to learn any way she could.

In ‘99 Chihuly helped open the Taos Glass Arts School, a hot shop for functional glasswork, and Conway volunteered to work in a program that helped young Native Americans earn their GEDs. Whenever she could, she also traveled two hours south to work for Santa Fe glassblower Elodie Holmes, whose studio she helped construct almost two decades ago.

“And even with all my experience,” she says, “I feel like I’m still learning about this material every single time I work with it.”

Glass is a fickle material that depends on specific heating and cooling processes, temperatures, and, for larger works, a skilled team to help in the hot shop. “I always say that glass is the most expensive sketchbook in the world,” Conway says. “Colors can look strange next to each other after they’re combined, pieces might break during the cooling process, which can take days at a time. There’s no rough draft. You have one chance to get it right.”

Conway has worked at Public Glass in San Francisco and traveled around the globe teaching at schools and workshops, including several stints on the prestigious glass-blowing island of Murano in Italy. She’s one of few contemporary women who has blown glass with the Venetian maestri. In 2011 she accepted a teaching position in the Pratt Fine Arts Center glass department in Seattle and relocated her entire operation. She still volunteers and instructs Pratt students in flameworking, which is the blowing and sculpting of glass at a bench-top torch. 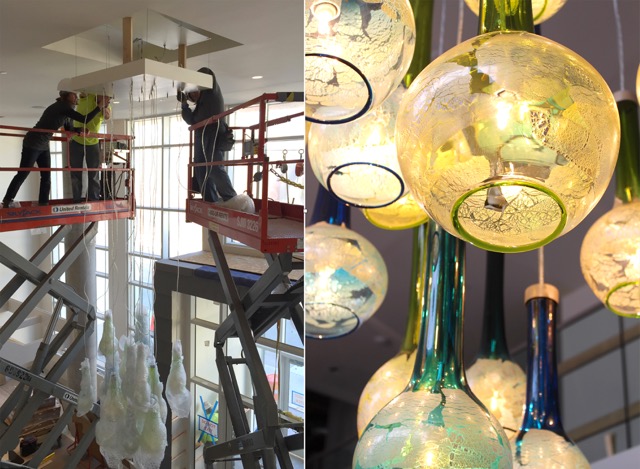 Located in Georgetown, Conway’s Illuminata studio functions as a space to store and display her oeuvre of work, as well as a hub for packing orders and designing future projects. She blows glass at Pratt and other local private studios, often with the help of a team of talented glassblowers, welders and fabricators who help create the non-glass components of her lighting and as assist Conway during the blowing process, which consists of the quick, precise maneuvering of heavy, molten glass on the end of an iron blowpipe.

Conway’s forms are organic in feel, combining orbs and curves, often inspired by the Northwest landscape. She’s spent years experimenting with texture, pattern and shape, using her pieces to experiment with light. Her work has appeared at the Living Computer Museum, the Goldfinch Tavern at the Four Seasons Hotel and the Bellevue Arts Museum. In July, the Motif Hotel in downtown Seattle chose Conway as its visiting artist for the 2017–18 year. Her submission, which beat out dozens, is a graphic interpretation of the hotel’s logo derived from the distortion of light through glass. It appears on the hotel’s in-room stationary, business cards, room keys, uniform and accessories worn by staff members.

Concerned by the need for more sustainable approaches to the art form, Conway founded BioGlass in 2006 with the hopes of exploring eco-efficient methods and materials that will buoy the industry and help attract a new generation of glassmakers. An international collective of expert glassmakers, equipment builders, biofuel specialists and educators, BioGlass members travel to glass gatherings to share their findings on new, more efficient techniques. The glassmaking process requires a tremendous amount of resources, and Conway hopes to find ways to keep the craft alive and thriving in a responsible way.

“This is an ancient art, but it’s not immune to changing and adapting to contemporary times,” she says. “If we can find ways to create the same beautiful work using more sustainable methods, it could help save the future of glass.”