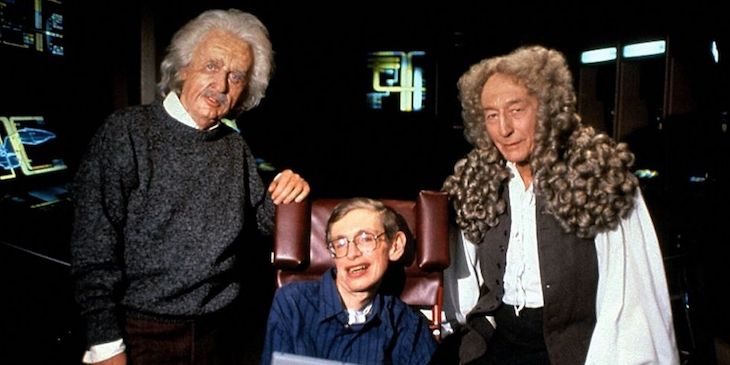 Turn on late-night television this week and you’ll see numerous attempts at Stephen Hawking jokes, most of them premised on the most easily reducible elements of his life: his disability, his genius, his wheelchair, his robotic voice simulator or, digging slightly deeper into his biography, the fact that he was married and divorced twice and had three children despite full-body paralysis. Many of these takes will be ableist or otherwise problematic, and some will be clever and funny, but even the best of them will draw upon a cartoonish totem depiction of the man.

Comedy is a multiphasic art form—it meets you at your own level of understanding. You can watch Itchy & Scratchy and laugh at the many ingenious ways the cartoon mouse devises to dismember the cartoon cat, and/or you can appreciate the series-within-a-series’ satirical commentary on the hyperviolence of children’s television programming. Comedy can be crude and slapstick or abstract and cerebral, or all of these at once. In this way, it’s like the practice of Buddhism: The unschooled peasant burns a candle to propitiate a local nature deity while the educated monk meditates on intangible concepts developed over years of studying koans and sutras. Both practices embody parts of a greater truth.

By the same token, everyone’s a comedian. When a famous person dies we get to witness the multiphasic nature of comedy because that’s when everyone tries their hand at making a joke. (As a professional comedian I have dubbed topical sprees like this “amateur hour.”) This is especially true of an icon like Stephen Hawking, a one-off so instantly recognizable that he already exists in the Pantheon of Comedy Prototypes, seated next to Stevie Wonder.

Obviously, there’s much more to Hawking than that. He contained multiverses. He’s a symbol of an exceptional person with distinctive traits but he was also a repository of vast theoretical knowledge about reality. Also, most germane to this discussion, he had a sense of humor, an attribute that puts his cosmos-spanning genius on a human scale. Hawking made numerous appearances on comedy shows like The Simpsons, Futurama, Comic Relief specials, The Big Bang Theory (they can’t all be winners), and a funny scene in Star Trek: The Next Generation. He made so many comedic cameos he’s being memorialized as “the genius with a funny side.”

Hawking once threw an unannounced party for future time travelers and no one showed up—a cheeky validation of his theories. Another time he consoled a teenage girl at a Q&A session by reassuring her that Zayn Malik might still be a member of One Direction in an alternate universe.

Hawking’s willingness to toy with his image in comical ways—he often portrayed himself “against type” as arrogant, ignorant or unexceptional—made him seem approachable. The idea that a figure as ubiquitously caricatured as Hawking was “in on the joke” elevated him beyond the reverence due an eminent theoretical physicist; it made him beloved, familiar. He turned himself from object (totem) into subject (active participant), rising through the echelons of comedy to “cosmic brain” level.

Hawking stared into the abyss, confronting the existential absurdity baked into the nature of time and space, and declared, “Life would be tragic if it weren’t funny.” Coming from a towering intellect with unparalleled powers of insight, this verdict carries vast weight. Of all Hawking’s contributions to science, it’s perhaps the most humanity-affirming observation he ever made: Comedy is universal.