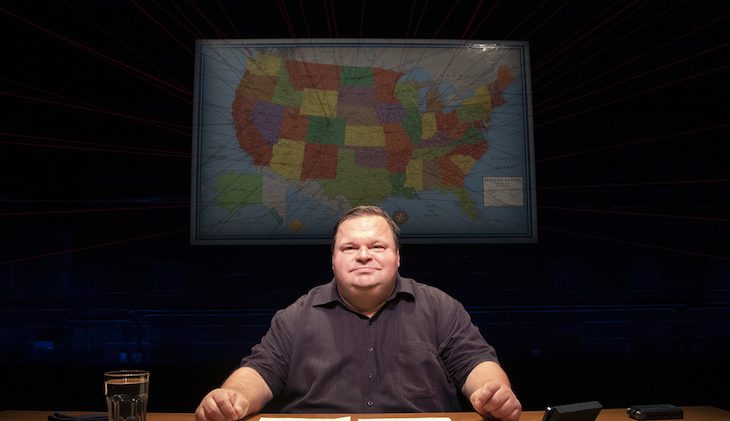 If, in 2018, the idea that America was built on a foundation of slavery and genocide is new to you: Welcome! Where have you been?

OK, that’s not entirely fair. For generations, this country has fed its citizens a diet of revisionist history lionizing oppressors rather than honoring the oppressed. Howard Zinn’s groundbreaking 1980 book A People’s History of the United States was dedicated to correcting those ubiquitous fallacies: Columbus was a conquering hero, the founding fathers were revolutionary geniuses, Native people were super happy to give white colonizers their land, etc.

Monologist Mike Daisey framed his new 18-part work, A People’s History, around that book, and his own U.S. history textbook. I can’t speak for the first 12 segments, or the later five. My only experience, at Seattle Rep, was of episode 13, which began with a lot of backstory and an elaborate metaphor that boils down to this: We, as America, are in a fucked-up house of our own making and no one wants to acknowledge that there’s poisonous mold in the basement.

Seated behind a solid wooden desk, complete with a shiny red apple and a map of the United States hanging behind, Daisey is here to teach us. In many ways, I’m glad he is. Theater audiences are, as Daisey points out at length, for laughs, typically comprised of white, wealthy, well-intentioned people. What he’s banking on, it seems, is that they aren’t that well-informed. How else could you milk a lengthy joke about the joy that is “the certainty of a mediocre white man” as though variations on that joke haven’t been in circulation among women for years?

Episode 13 kicks off in the mid-1970s, in an America grappling with its sense of itself. It focuses on three topics: women’s liberation, Native revolution, the racism of the prison-industrial complex. Daisey is an engrossing performer, no question, though his usually explosive stage presence struggled under the likes, umms and paper shuffling that came with trying to find his place on pages literally Xeroxed from the Zinn, a struggle that made his rehearsed jokes all the more awkward. Given the Everest of material he’s created for himself, that’s understandable.

According to Daisey’s introduction, A People’s History in its entirety follows a classic three-act structure. But as a standalone piece, this one was remarkably undramatic—we don’t start in one place and end in another, ready to begin the next installment in a new moment in time. Rather, Daisey addresses these three social issues one at a time, rather academically, and then toggles forward in time, either to modern manifestations of these issues or to stories from his own life that illustrate his relationship to them. In college, he took a class called The Goddess Within, because young men love pussy. Hardee-har-har.

Perhaps it’s just luck of the draw that I landed on a feminism-heavy episode, and so A People’s History rubbed me the wrong way. There are certainly plenty of people for whom these are new ideas, and if they’ll listen to Daisey, I hope to God they get to this show. But there’s something cynical and counterproductive about believing that only a straight white man can get other powerful white people to listen to messages of social justice.

“I know who you are, you’re the white bourgeoisie,” Daisey tells us, near the top of the show, and often winkingly reminds us that he’s got our number, knows who we are, what we’re about. And he lumps himself right in with us, but I can think of few things more boring than watching someone come to terms with his own privilege, especially as Daisey throws around buzzwords like “intersectionality,” “gaslighting,” “privilege,” “trauma” and “emotional labor” while not a single person, other than himself, is credited in the program for creation of the show. That is not using your privilege for good, no matter how much you’re convinced that you’re doing the right thing. Maybe you are doing the right thing! Just not in the right way.

In one of the show’s most moving sections, Daisey addresses his culpability in the dissolution of his marriage, because the stakes are real, and they’re his own. For better or worse, social media and internet connectivity give us unprecedented access to one another. We can tell our own stories, and we’re learning the importance of hearing stories from the source. So yes, Mike Daisey is getting these ideas onto the stage of Seattle Rep. But he’s no longer telling the stories of people who can’t speak for themselves.

A People’s History runs through Nov. 25 at Seattle Repertory Theater.