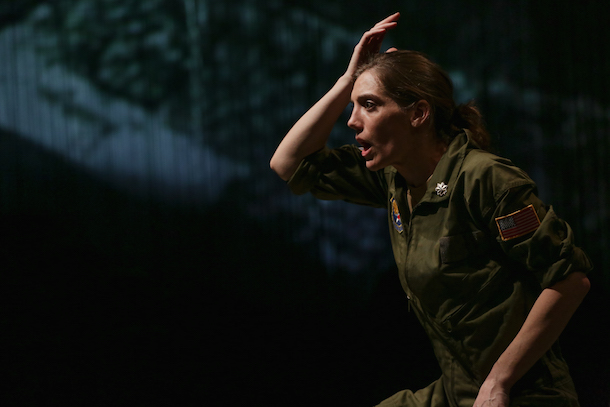 Grounded is an intense and breathless play that explores the singularly terrifying landscapes of modern warfare and the human heart. Written by George Brant and premiered in 2013, it enjoyed a respectable run at New York’s Public Theater two years ago, in a production that starred Anne Hathaway. It’s currently running at Seattle Public Theater, directed by Kelly Kitchens.

First and foremost, Grounded is a one-woman show, so that’s marvelous. (Let’s hear it for strong leading roles for women in modern theatre, woohoo!) Secondly, it’s a one-woman show that may leave deep, aching craters in your soul.

It all starts off…well, not innocently, but earnestly. The Pilot (Mahria Zook) takes the stage in her USAF flight suit, prudently ponytailed, confident. She’s joined onstage by a single chair and some lazy clouds that calmly chug across the stage by virtue of charming projection work (Ahren Buhmann) and a clever fringe scrim (scenic design by Julia Hayes Welch). The Pilot spreads her arms wide, taking in the space and showcasing her beloved flight suit to the audience, and to herself.

“This was who I’d become! Through sweat and brains and guts!” she tells us, commanding respect. “This is me. It’s more than a suit. It’s the speed…it’s the respect…it’s the danger!”

The Pilot is a high-functioning adrenaline junkie, deployed to Afghanistan, where she flies an F-16 and blows up brown people for a living. (As she tells us, they’re “the guilty,” “terrorists” and so forth.) The Pilot is in love with her life and in love with the sky, and with America, and way too in love with her jet.

I can’t imagine Anne Hathaway playing this role. She’s so wispy. Mahria Zook’s Pilot is not wispy; she’s aggressive and hard-bitten. (She reminded me a lot of the cop sister on Dexter, actually, or Starbuck from the 2004 Battlestar Galactica reboot!) She’s a female American dude-bruh, all guns and glory, with nary a drop of empathy or pesky introspection to poop her party. And she loves it.

But one night the Pilot meets a boy in a bar and suddenly she’s all pregnant and in love—and if she doesn’t want her unborn child to suffer a “spontaneous G-Force abortion” (holy moley—graphic much, George Brant?), mama is effectively…grounded.

The Pilot can no longer pilot her plane, but with a little extra training, she can easily pilot a drone. The USAF elects to reassign her to the cutely named “Chair Force”, a remote drone operation unit in the Nevada desert. Yes, drones—America’s murder-bots in the sky. So she moves to Vegas and starts killing people halfway around the world by remote control. And at the end of the day, she gets to go home to the loving arms of her family!

But somehow, far removed from the relentless stimulation of combat and absent the imminent threat of personal harm, some serious PTSD begins insidiously asserting itself within her. Cracks in her emotional armor begin to show. Plucked from the bright blue yonder, she feels trapped and anxious and quickly begins to unravel. As she sits at her computer, stalking her targets for hours on end, conscience starts to whisper in her ear. With it comes dread empathy—and then (completely warranted) paranoia. She finally begins to understand the cruel and murderous nature of her mission, and the consequences of her blind, accepting obedience to the war machine of the U-S-A. Once woke, her mind buckles under the pressure of its own self-awareness.

But she doesn’t suffer in silence. She takes that self-reflection, turns it on the audience and makes us face our own ugly reflection.

The message is clear: No one is a bystander. None of us is innocent. Just to live in this society is to be complicit—and it’s way too easy to wrap up that brutal realization in hyperbolic sloganeering and ignore it. Which we do, because the emotional consequences of acknowledging it are so great. For those who actively execute and participate in the sins of our society, those who actually push the kill button, the realization can shatter the mind.

Grounded is smartly executed, with moments as moving and memorable as they are deeply uncomfortable. Its message bears repeating. And you might not like yourself very much after you walk out of the theater.