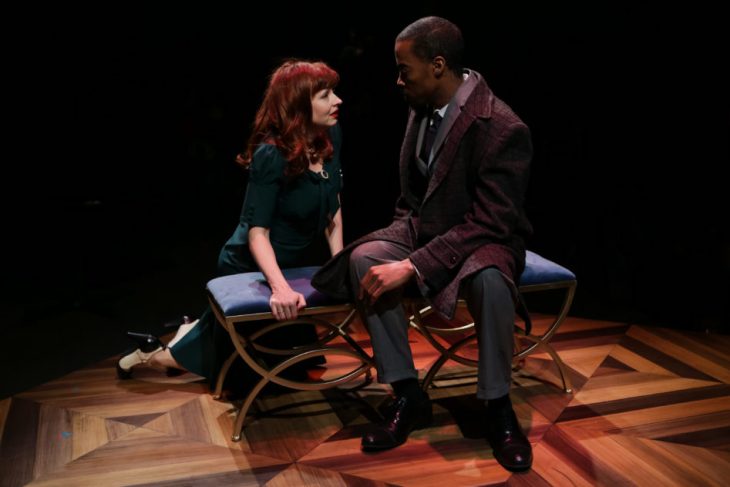 Spoiler alert for a nearly 90-year-old novel, its several film adaptations and the brand-new stage version from Book-It Repertory Theatre: The actual falcon in The Maltese Falcon is worthless.

An enamel-covered figurine supposedly encrusted with priceless jewels underneath, the falcon is eventually revealed to be nothing more than a plot device, once its narrative use has elapsed. The bird is the prototypical MacGuffin, but it’s far from the only contrivance in The Maltese Falcon. Basically, every element of this detective story piles into a knotty accumulation of half-sensical events that sort of cohere into something meaningful by its conclusion. Sort of.

That the story doesn’t hold up under much scrutiny hardly detracts from the terse, efficient beauty of Dashiell Hammett’s prose or of John Huston’s elemental noir atmospherics in the best-known film version. Both proceed with the propulsive force of a runaway train.

Jane Jones and Kevin McKeon’s stage adaptation also generally works, affecting a coolly ironic tone and keeping the convoluted plot mostly lucid. (A diagram of characters’ interactions in the program offers story newcomers some help untwisting the tangled threads.) As is Book-It’s MO, the adaptation is faithful to Hammett’s language.

But this isn’t just a Book-It production; it’s a collaboration with Cafe Nordo. Mixed feelings about dinner theater aside, Maltese Falcon is an odd choice for the format. Does the barreling narrative, in which private eye Sam Spade (Arlando Smith) gets dragged into a criminal conspiracy by eye-batting Brigid O’Shaughnessy (Kjerstine Rose Anderson), really benefit from more time to think about plot machinations? This is a roller coaster that probably shouldn’t be pausing for act breaks of lentil salad and chicken and dumplings. (An all-female jazz band keeps some of the mood going between acts—or at least worked to drown out a roaring street sweeper right outside Nordo’s door at a recent performance.)

The neck-craning, sightline-straining issues typical of dinner theater are ameliorated somewhat by an elevated area where Spade’s waiting room is located, and some of the drama plays out, but there are only so many ways for director Jones to stage a scene in these confines. Still, she makes sure the compressed action packs a wallop, with stylized sound effects to match the violence.

As the womanizing, wisecracking Spade, Smith heads in the opposite direction from Humphrey Bogart, adopting a phlegmatic attitude that sometimes borders on the somnambulant. But it’s a novel take on the character, and it has a charm that slowly reveals itself. Anderson’s breathy femme fatale with an e-cig is more archetypal, but she slinks into the role nicely.

Aaron T. Moore beams with malice as boisterous seeker of the falcon Casper Gutman, while Tom Dang looks a little more put-out by the whole enterprise as Joel Cairo, the gay henchman whose homosexuality only made it into the pre-code 1931 film version. Opal Peachey is an indefatigable ray of sunshine as Spade’s secretary, and Jesica Avellone and Brandon Felker capably fill out the ensemble.

The four-course menu is fine, if only tenuously thematically connected to the source material. A pre-show appetizer gilds the lily with chicken pâté and shaved filet mignon on sourdough alongside oily house-made potato chips. A cold black lentil dish is far blander than a topping of harissa cabbage would suggest, with only a couple tiny flecks of preserved lemon offering much interest. A comforting main course of chicken stew features one pleasantly herbaceous dumpling. Dessert is cleverer: an eyeball-like daub of panna cotta that riffs on an Aviation cocktail with a mercifully restrained hint of perfumey Crème de violette and a falcon-shaped cookie. Tasty, but not worth chopping up a lean detective tale into three languorous segments.

The Maltese Falcon runs through April 8.