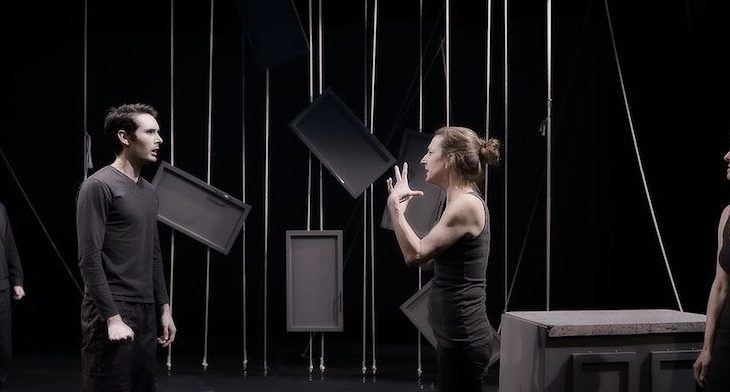 Please don’t let the name Happy, Happy, Happy fill your mind with any silly notions. The newest offering from Macha Theater Works, a long-brewing collaboration between writers Lisa Every and Jenn Ruzumna, begins with a grandma’s funeral and ends in utter betrayal, so try not to go imaging tap-dancing penguins or an excessive amount of warm-n-huggy, Hallmark-flavored schlock. Sure, a whimsical 10-layer birthday cake is prominently featured, but even that is miserably gluten free. It’s quick and funny but darkly so, and just a hair twisted—which is pretty much my favorite genre of funny. The witty, thoughtful production, elegantly staged, engages messy amounts of humanity, badly kept secrets and some really nasty life choices. Plus, there’s lots of taboo sex and very eye-roll-y jokes about avocado toast, too.

There are a remarkable amount of jokes about avocados. Dang millennials, am I right?

We begin with Lauren, the anxious and rather harried mother of the handsome and mysteriously scarred 19-year-old Caleb (the aforementioned millennial, a capable performance by Warren Levi Haney). We realize immediately that this play is not necessarily taking place in real time: Lauren’s angst-y opening monologue is split between a narration that seems to be happening firmly in the now, but then suddenly becomes a recollection, a living memory trying to figure itself out. “I see him over there, under the tree, and I realize it was the first moment he saw her…” The dialogue is dense, and it comes on fast and furious. Amy Poisson’s direction drives the story forward swiftly, demanding close attention lest any of it be missed. The cast was up to the challenge, bantering and bandying the rapid dialogue back and forth like a ping-pong ball.

In the first two minutes, Lauren lays bare the play in a nutshell: “I know! I shouldn’t! I shouldn’t smoke! But I like it! It feels good!” It’s a strong, earnest performance by co-author Lisa Every, and her opening monologue succinctly sets the tone and the moral of this story: the things that feel best to us might be toxic, to ourselves and/or others, but in the end, compulsions will out, and the pleasures are probably worth the risk. Burn those bridges. Smoke that cigarette. Use that cigarette to burn those bridges! You do you. Consequences? Fine. And how much is loyalty and family worth, anyhow?

Macha’s last production, Starring Claire from Hollywood, didn’t live up to the production company’s motto, “fearless female theater,” but I have no such gripes about Happy, Happy, Happy. Its focus is on strong three-dimensional female characters, their relationships fraught with nuance, confusion, passion, and angst. How far is a woman allowed to go to secure her own happiness? What is a woman willing to do to protect her own, to defend her expectations, live up to her own standards? How does she cope with loss and change, and what do women demand from—and owe to—other women anyway? And perhaps most importantly, how much can a person risk, forgive, or even ignore to survive? That Macha was able to serve such weighty material in so funny and fun a manner is a credit to writers Every and Ruzumna (who also plays Anne, Lauren’s best friend, who is fond of ecstasy and, um, chicken). It is a sincere and thought-provoking production, without waxing too heavy-handed or preachy, or going too far over the top.

Happy, Happy, Happy, is a smart, tight and clean 75 minutes of theatre that will surely leave you thinking and definitely get you talking: about women, about family, friendship, relationships, risk and tolerance. But mostly this show underscores the simple facts that life is complicated, people are a mess, and love (familial, fraternal, whatever) can be a serious pain in the ass. But in the end, it’s all worth it. Like Lauren says, “Never pass up a chance to drink whiskey and swim naked!” Always good advice.

Happy, Happy, Happy runs through Oct. 28 at The Erickson Theatre Off Broadway