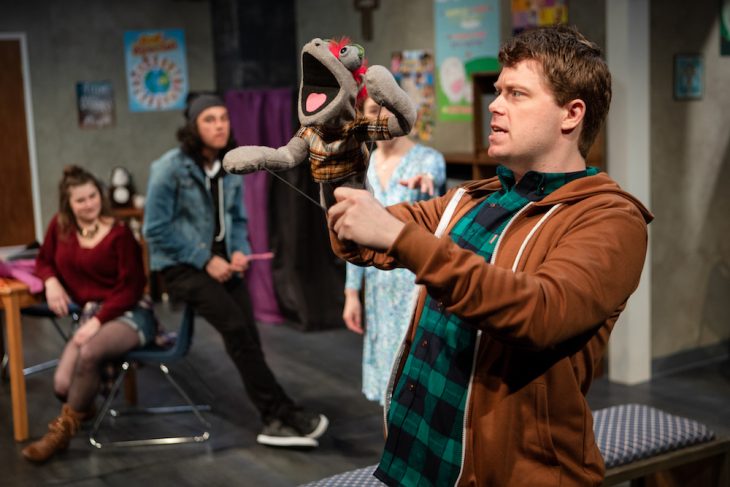 There’s a lot of screaming in Robert Askins’ uproarious Hand to God, a play about the limits of our own personal mythmaking, complete with puppets.

All of these screaming scenes start out funny before dissolving into something more disturbing: primal, shrieking anguish. There’s emotional and sexual repression galore in Hand to God, and when the pent-up feelings burst forth, it gets ugly. And then it gets funny again.

Kelly Kitchens directs an effervescent staging of the Tony-nominated play at Seattle Public Theater, filled out with a cast of physical comedy pros who prove themselves willing to continuously up the ante on the play’s outrageousness.

Sunam Ellis stars as Margery, the chipper leader of a puppet club in the basement of a suburban Houston church, where the lights are sickeningly fluorescent (thanks, Thorn Michaels) and the walls are covered with cloying posters about the goodness of people and God’s love (Christopher Mumaw’s scenic design and Robin Macartney’s props nail the details).

Margery, a recent widow, is also busy fending off the advances of Pastor Greg (Martyn G. Krouse), the kind of man whose reputation as a good guy somehow covers for all manner of boundary-skirting behavior. Askins’ satirical targets tend to be larger than individuals, but anyone who’s spent much time in a fundamentalist Christian environment will recognize this guy.

The sexual antics—up to and including puppet fornication—in Hand to God are cartoonishly hilarious, particularly when Ellis jettisons the primness to let out Margery’s inner sadist. I already knew Ellis was a fantastic dramatic actress, but her physical comedy gestures here are a revelation.

But the play’s central transformation takes place on Burris’ right arm, where Tyrone morphs from a cute little Muppet castoff singing “Jesus Loves Me” into a torn-shirt-wearing, six-pack-sporting, wild-eyed cretin with a Lenny Bruce mouth and a taste for blood. Is this a demon taking possession of Jason or just an outlet for his id? Either way, Tyrone is determined to get him to stand up to Timmy’s bullying and act on his crush on Jessica. His methods are controversial, to say the least.

Burris, who’s done impressive puppet design work for some Annex Theatre shows and whose creations in Hand to God are intricately detailed, might be even better as a performer, seamlessly embodying Jason’s timidity and Tyrone’s fuck-you showmanship. Askins’ play is glib and gruesome, but there is genuine humanity here, and you can see it struggling to emerge in Burris’ layered performance.

In a pair of knowingly didactic monologues that bookend the play, Tyrone waxes about the creation of the devil as a convenient scapegoat for all of civilization’s ills. As a skewering of a specific brand of Christian hypocrisy, this is entertaining, if not especially cutting. But there’s a moment in the prologue when Tyrone recounts one man’s creation of morality: “He invented right and wrong. Right is for all of us,” he says. Then, with a withering directness: “Wrong is just for you.” I swear, that puppet looked right at me and I felt all the humiliating isolation that organized religion frequently doles out. It was like I was back in church.

Hand to God runs through June 10 at Seattle Public Theater.