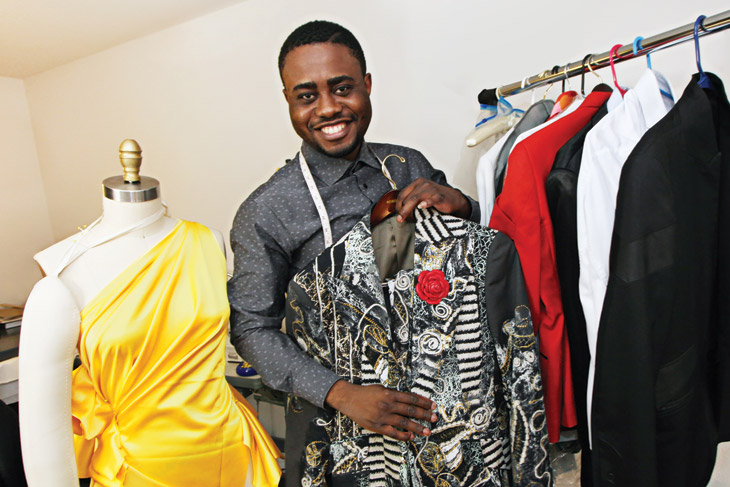 Apiti in his Magnolia apartment, where he designs and sews eveningwear for women and men, much of it inspired by the street style of Congolese dandies known as sapeurs. Photo by Kelly O

Amid the sea of tourists in cargo shorts and khaki-clad office workers flooding Westlake Park at lunchtime, Gustave Apiti appears as a brilliant flash of color. Splashes of orange, pink and red streak his flower-print silk shirt, radiating from beneath a blue and gray checkerboard two-piece suit, which is festooned with a red and pink handkerchief. This is an outfit of Apiti’s own craftsmanship. With Cole Haan brown leather loafers on his feet and a similarly hued satchel, he matches effortlessly.

It’s a few hours before Apiti’s afternoon shift as a fitting tailor at the Nordstrom flagship store. Later tonight—and during almost all of his non-working hours—he’ll hole up in his Magnolia apartment making clothing under the moniker of Gustavo Apiti Couture, the independent fashion line he launched in 2014, a year after he arrived in Seattle on a refugee visa.

I first met Apiti last year at Nordstrom when he measured me for alterations to a pair of slacks. He told me he was born in the African fashion capital of Kinshasa, Democratic Republic of the Congo, and revealed his sideline as a designer. With my upcoming wedding in mind, I asked about a bespoke tuxedo. Flash forward several months to March 2018 and Apiti, wearing a variety of paisley pants I don’t often see on my block, showed up at my house with a tape measure and a tome of Italian fabrics to steer my gray wardrobe toward the dark navy tuxedo with a baby pink shirt that I’ll wear on my wedding day.

For a designer who lacks a formal showroom, this kind of word-of-mouth hustle, along with a local runway debut in 2016 and turns at New York Fashion Week and FashioNXT in Portland, has helped build a clientele. As a one-man operation, he’s working on nine custom pieces this summer alone. Not that he’s complaining about the workload.

“Fashion, for me, is a gift,” Apiti says during our conversation in Westlake Park, fluttering between English and his native French.

One of 18 children, the 35-year-old Apiti grew up comfortably in Kinshasa, the son of an ex-military public servant and a school principal who ran a seamstress business on the side. Between his mother’s piecework and his uncle’s visits from the provinces to pick up the latest fabric and to use the family sewing machine, needles and thread were a regular presence around the house.

In 1998, when his sister moved to Angola, Apiti took over her home-based clothing business; he was 15 years old and has made clothes for his own customers ever since. In Kinshasa, he mostly fabricated women’s clothing from liputa fabric, the Congo’s trademark colorful prints. He added menswear to his repertoire after a local tailor botched an outfit Apiti had ordered for the Congo’s ever-important Christmas and New Year’s season, when new threads are a must. All along, he aspired to a career beyond Kinshasa. His dream was to be an international designer.

Tuition was too steep for his parents to support studies in Paris or London, so he made his way to South Africa in 2003, first for English lessons and then to enroll in university. After several years spent between South Africa and DRC, as well as stints with South African fashion designers like JJ Schoeman and Strangelove, he graduated from Tshwane University of Technology in 2012 with a fashion degree.

“South Africa taught me how a designer can work on an international level as a respected professional, versus in Congo where you are seen as a street tailor,” he says. South Africa also saw him change “Gustave” into “Gustavo” for professional purposes, a variation friendlier to the non-francophone tongue.

While in school, Apiti defrayed his tuition costs by making clothes for the Congolese expatriate community. One commission landed him in hot water: After making a series of camouflage outfits, he received a visit from the South African police. Camouflage print is legal for civilians in South Africa but restricted to military use only in DRC, and it turned out his customer was a group of wanted Congolese rebels. The repercussions of that incident led him to apply for refugee status and he received a U.S. visa in 2013.

A cousin drew him to Seattle, where the local Congolese community suggested New York or Los Angeles for a fashion career. His trip to New York didn’t feel quite right, so the devout Pentecostalist prayed on the decision. “I felt in my heart I have to stay in Seattle,” he says.

With no connections in the industry, he sifted through the city’s fashion scene before landing a contract sewing job with Luly Yang in 2014. “Working for Luly gave me a clear picture of how I can stay and really make it,” he says, as by sheer karmic coincidence the Seattle fashion icon herself walks by on her way to a bubble tea café.

In 2015 he took a job at Nordstrom—a retailer he’d never heard of before moving to Seattle—while continuing to pursue his couture line in his spare time. “Busy is Gustave’s middle name,” cracked one of his Nordstrom menswear colleagues, a double entendre on both his fashion sense and his work ethic.

Apiti’s couture line offers modern takes on traditional suits, gowns and eveningwear, always with a dapper flourish. His work interprets the famous Congolese dandies known as sapeurs, adherents of La Sape, short for La Société des Ambianceurs et de Personnes Élégantes, or the Society of Ambiance-Setters and Elegant People. The drive to look sharp in modified Western styles on the streets of Kinshasa, Brazzaville and across the Congolese diaspora is rooted in the era of French and Belgian colonialization. Given their lavish spending amid a country mired in poverty, sapeurs are not without their critics. But they insist their ability to out-dress the Parisian runways is a postcolonial triumph.

“All Congolese love to dress up nicely,” Apiti says of the sapeurs, who provided the name of his upcoming fashion show at the Sheraton Seattle. He’s resolved to hold the famously dressed-down city to a higher, Congolese standard: “We can do something different!”

As he leaves for work, I watch Apiti cut a dashing figure across Westlake Park. I just need to look half as good on my wedding day as he does on a Tuesday.

Gustavo Apiti Couture presents Les Sapeurs on Aug. 18 at the Sheraton Seattle. A portion of proceeds will benefit the Congolese Integration Network, a social services organization for Congolese immigrants in King County.