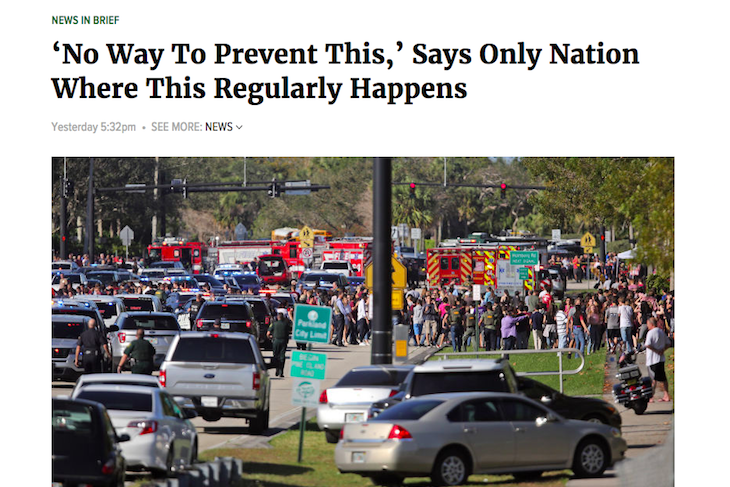 This recurring headline from the Onion is the most poignant satirical response to mass shootings.

The mass murder of innocent children is comedy kryptonite. The brightest comedic minds have tried and failed to write material that holds up in the face of soul-shattering tragedy. Even if you do have a great joke about senseless gun murder, chances are it’s not good enough to be funny in front of an audience in the wake of yet another active shooter scenario, which these days happens to be any given night. Also, any discussion of guns tends to split the audience between people in favor of at least modicum of gun control (the majority of citizens) and toxic fetishists who prioritize their war toys over human life. To get both camps onboard, it’s gotta be a very funny joke.

The most poignant satirical response to mass shootings is the Onion article headlined “’No Way to Prevent This,’ Says Only Nation Where This Regularly Happens,” which the Onion recycles and updates with the dateline of the latest massacre every time it comes true. Yesterday, that article took on more sorrowful irony when the editor who wrote the headline, Jason Roeder, revealed that he currently lives a mile from Marjory Stoneman Douglas High School, where the most recent shooting took place. 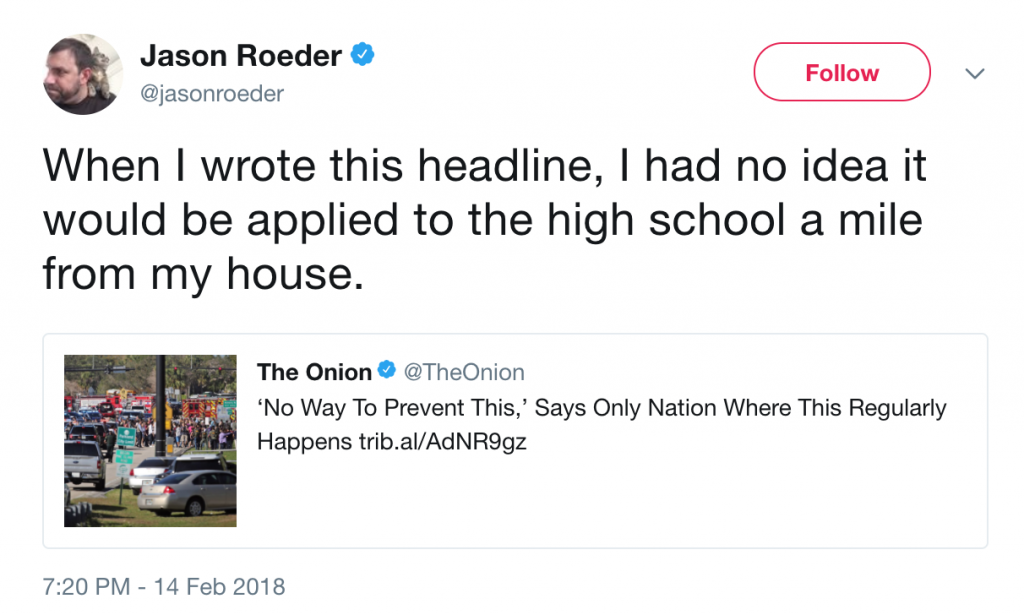 Comedians are brave enough—or foolhardy enough—to look into the abyss and report back, to take on the thorniest problems we face when no one else will. This is one of the vital roles comedians in society (when we’re not busy reinforcing stereotypes and engaging in lazy button-pushing for cheap laffs). Seeking that necessary perspective this morning, I watched some of the best standup bits about guns and gun control on the internet. The vast majority don’t hold up in the immediate aftermath of a massacre; some of the greats fall flat when talking about gun control, such as George Carlin’s rant on the “dickless lunatics” of the NRA that turns into a homophobic riff on how former NRA president Wayne LaPierre’s name sounds “fruity.”

Then there’s Bill Hicks, who often trafficked in cathartic onstage violence (see also “Let’s Hunt and Kill Billy Ray Cyrus” from his censored last appearance on Letterman) with his bit on the insane gun murder rates in the US versus the low rates in the UK. He’s correct in his assessment but it ultimately turns into a gag making fun of the Brits that dabbles in a bit of false equivalence to get a laugh—Hicks performed for rowdy crowds in the gun-loving Deep South to pay the bills. As a Texan he knew how to deal with that particular regional mentality and would tread right up to the line that’d rile the rednecks, often stepping over it but other times playing it safe.

One video that turned up in my YouTube search was a clip of former Texas governor Rick Perry making a lame, hacky joke about gun control. It’s an example of how much comedy can suck in the wrong hands and how glib these NRA-bought politicians can be about the human suffering they enable. For them it’s all a bunch of chuckle fodder.

Chris Rock has a way of approaching a topic sideways, nudging and pulling you into his unexpectedly sensible take. Here he comes at gun control from the supply side:

Probably the most popular gun control comedy video to make the rounds recently is this Jim Jeffries bit from his 2014 special BARE. He systematically dismantles arguments against gun control and demolishes the myth of gun safety. He talks about Americans’ weird fetishization of our Constitution, of people approaching him after shows shouting, “You cannot change the second amendment!”

“Yes you can,” he responds. “It’s called an amendment.”

Jeffries’s approach to the topic is easygoing and piss-taking, made more potent by his fish-out-of-water status as an Australian looking at the whole sordid mess with fresh eyes. The atrocities we’ve come to accept as commonplace are shocking, and he reminds us of that as palatably as he can. He’s not strident in his delivery, but nonetheless delivers a comedy manifesto on gun control.

The fact that Jeffries also fits the demographic of an active shooter—a beer-swilling white dude prone to anger—lends his arguments more credence. He’s fighting back against toxic masculinity with its own weapons: derision, one-upmanship and the white guy’s insistence on the supremacy of his “logic” to justify lizard-brain impulses. His approach won’t do much to stop random killings, but it’s a small consolation to see it articulated thoughtfully, in good faith, with humor. In this hopeless situation, that counts for something.