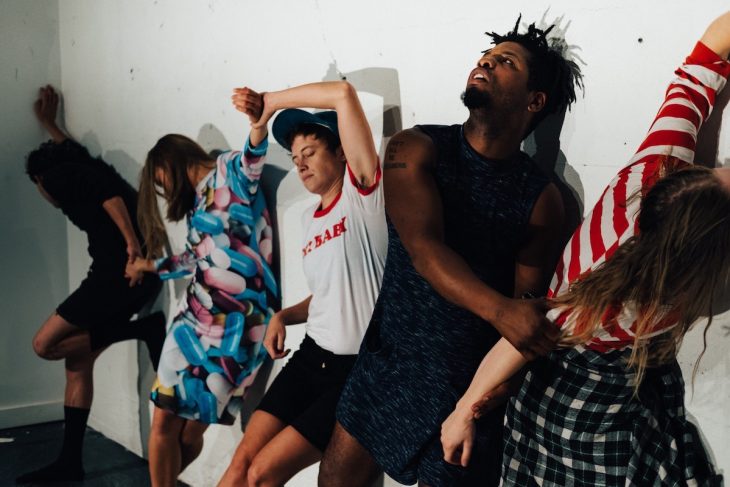 I’ve had days that felt like crashing face-first into a pile of crumpled beer cans, but I would never have known that before attending Chasm, the latest show by movement artists the Grief Girls, which premiered last weekend at BASE: Experimental Arts + Space. Director Laura Aschoff has a way of putting together images that capture specific, complex feelings and lure those feelings from the depths of our psyches.

Our attention is elsewhere when the enormous crash of cans and a quick light shift snaps our focus to Erin McCarthy’s committed fall. Lying prone for a while, she exudes a sense of defeat, as if it takes great energy to continue on. Eventually, she gathers her resources and persists at the inane task of sliding up the wall, trying to keep as many cans as possible pinned underneath her body and standing with great effort. When the other Grief Girls come to assist they wedge empty Rainiers in hard-to-reach places—between the neck and the wall, under the shins, the armpits. It’s hard to know whether they’re helping or enabling, perhaps well-intentioned but ultimately adding to McCarthy’s burden.

The Grief Girls are a multi-gendered cast of seven, which seems to swap out a few members with each show. Their name brings to mind a punky girl-band, an image undermined by the heaviness of “grief,” which puts you in the perfect mindset to take in Aschoff’s dark humor and choreography anchored in underground pop culture. Dressed in thrift-store hipster casual, the dancers and their director mill about before the show, setting the stage for the work’s lo-fi, transparent vibe. Aschoff makes an offhand and anxious curtain speech, explaining that the performance takes place everywhere in the large studio space so you might have to move during the show. She laughs nervously and ends with “You’re here. You’re complicit. We’re in this together. Good luck.” She’s just a little too vulnerable, she’s not performing the confident director role, and that feels just as much a part of the work as any of the choreography.

Despite the unpretentious aesthetic, there is great care and commitment to the performance. It opens with a beautiful image of light through an open door, through which the group moves as a mass—arms reaching out, grasping at the air. They begin to grab one another, collapsing and rising in a tumbling throng. Lighting design (Meg Fox) and shifts in location highlight what is essentially a series of vignettes that, while non-narrative, seem to have an intuitive thematic connection.

One performer, draped in a gauzy sheet like a Halloween ghost, sidles along the wall, scattering the audience members settled there. The ghost’s hand skitters toward a light switch, caught in a fervent compulsion to flip it; fighting the urge sends the ghost into little spasms of inner conflict. Meanwhile, an intimate trio develops in the center of the room, bodies rolling across one another, snuggling, undressing. A laughing soundtrack and the flashing of blinding fluorescent lights (the ghost has given in to temptation) create an ominous frame around the trio, and accentuate a beautifully subtle performance by Matt Aguayo, whose expression shifts from tentatively willing to abjectly horrified.

The interpersonal tension of the trio and the inner tension of the ghost is magnified by the tension created by placing these events in different parts of the space. Tension is the mortar that holds together most of Chasm’s images. When Markeith Wiley takes the center of the space, his movement is full of false starts, a series of halting half-gestures that seem to get stuck, his body trying to eke something out. Rubbing his face in frustration, he is unsoothed by an array of presented objects. He screams into a pillow, hungrily stuffs bubble wrap in his mouth, destroys a bag of white bread and punches an owl painting. His only way out is recruiting two audience members to physically boost him into the tech booth, 10 feet above our heads. Wiley’s performance is abrupt and almost funny, but it’s hard to laugh when he is so clearly alone; the parade of well-wishers presenting objects do not understand the depth of his frustration.

There’s a section of cheerleader-like chanting and singing repeated mantras like “What are you willing to sacrifice?” and “You are allowed to be wrong.” It’s less crystalline than the rest of the work and less memorable, but moves the arc of the piece forward to a place that is a little more tender. Maybe even cautiously optimistic. Julia Sloane shuffles laboriously into the space with blown-up balloons threaded onto her fingers and toes. As the balloons work their way off her appendages, flying humorously through the air as they deflate, there is an unburdening. Getting the last one off is a struggle, she flails wildly, but eventually works herself free and the balloon whizzes away.

The work ends as each member of the cast invites an audience member onto the floor for a slow dance. Some of the duets are playful, some a little sultry, some sweetly intimate. As the opening chords of Cowboy Junkies’ cover of “Sweet Jane” loop on repeat, we’re left with yet another almost cinematic image—a complex and recognizable feeling distilled into tangible action. This time, a feeling of connection and careful hope.