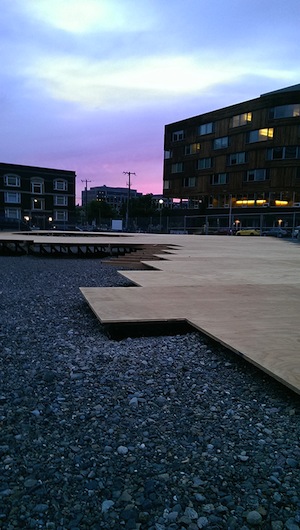 All Rise In Situ - Seattle.gov

On the north side of Denny Way, just past REI in South Lake Union, sits a 90,000-square-foot gravel lot—not an unusual sight for the rapidly developing neighborhood. The lot is easy to ignore, especially when driving by on the increasingly traffic-filled Denny. Even easier to miss is In Situ, the 1800-square-foot sculptural installation by Portland artist Karl Burkheimer. At a glance it appears to be a collection of plywood, possibly the remnants of a former construction project, or a sign of one yet to come.

The installation conscientiously incorporates the grading of the site, which slopes nearly twelve feet from Denny to John Streets. The graceful plywood construction rises in a gentle slope of its own, the visible under-bracing supporting the climb to a central platform with a large circle cut out of the middle. A seeming nod to the surrounding development, In Situ is part of ALL RISE—a series of performances and temporary installations at the location of Seattle City Light’s future Denny Substation in the Cascade neighborhood. The project is commissioned with Seattle City Light % for Art funds administered by the Seattle Office of Arts & Culture.

While Burkheimer’s installation is a standalone work, it is slated to cross over into the next project: the In Situ dance residences, which feature four Pacific Northwest artists including Salt Horse, Tahni Holt, Vanessa DeWolf and Alia Swersky. Each choreographer has a week residency at the space, which they can use however they want as a study for their final performance.

“The reason why these artists were picked is because they are already curious about site-specific work and the properties that the site offers,” explains Holt, who is the curator for the dance residencies in addition to performing as part of the project. “I wanted all of the performances to be improvisational in nature, but other than that there are no restrictions.”

The artists work in an improvisational manner, exploring movement in various spaces and venues, but each one has a unique performance style. Seattle’s Salt Horse, whose sometimes-unexpected use of space (crawling up columns and stalking around the balcony at Washington Hall in 2012’s Titan Arum), fantastical costumes, and at times Butoh-esque movement push the viewer into a zone of discomfort, but in a good way. Watching Salt Horse can be similar to a wonderfully strange, drug-fueled nightmare. Portland-based Holt can border on that same darkness, with abstract choreography varying from large interactive groups to smaller, intimately emotional duets.

The improvisational tone of the dance residencies fits with the mission of the ALL RISE series, which aims to create surprising moments, meant to be uniquely experienced. If you aren’t there at a certain time on a certain day then you’ll miss it, but if you are present, there is an exciting, almost electric vibe to being a part of a one-time arts experience.

“Our time with the site is a resting space between a period of site cleanup and the building of the substation that will follow,” the co-curators for ALL RISE wrote in an email, remaining anonymous as a way to keep the focus on the artists. “We imagine the site as a stage that is always watched, if even unknowingly. We are hoping to play with that constant audience…. Unlike traditional exhibitions or theaters where people seek out the performance according to their own interest, projects in the public realm have to assume a real multiplicity of viewpoints—physical, political and cultural.”

The dance performances, which will happen on the Saturday night at the end of each choreographer’s residency, will be very different, but they will all be a reaction to or interaction with In Situ. Salt Horse plans to do structured research twice a day during their residency, says Holt, seeing what the temperature and weather at the site are like, noting when the sun does down, what the lighting is like, and are planning to add color in some way to Burkheimer’s installation. DeWolf on the other hand will take small satellite groups of people around the neighborhood during her residency, asking them to write down observations and reactions to the neighborhood as they explore—an activity that could carry over into the performance. For the Saturday performances the chain link fence around the lot will come down and the public invited to watch, and depending on which artist is performing, possibly interact.

“Essentially we are situating the arts in a way that makes it difficult to avoid asking the question of why they are not more central to our daily lives,” the curators note. “Whether you are passing through or looking out of a hospital window (as so many do at the Seattle Cancer Care Alliance building located across the street from our site), you can experience ALL RISE. If you really want to change the way that people think about and talk about art, you have to present it in a way that is unexpected, and invite people in.”

The lot may be easy to ignore on the commute to work, but for the next four Saturdays it will be hard to pass up as it is transformed into a testament to the power of the arts. The neighborhood might be changing, but creativity will never go away.

SCHEDULE OF RESIDENCIES AND PERFORMANCES:

There is limited straw bale seating available, and attendees are encouraged to bring their own lawn chairs.

Photo of In Situ from Seattle.gov