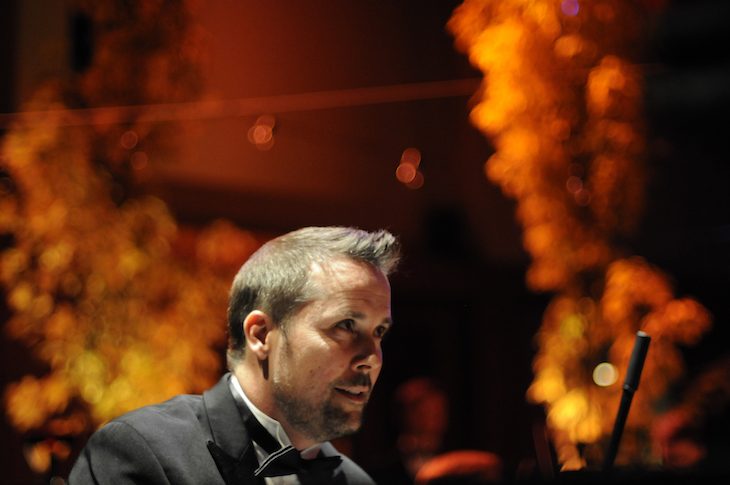 If you ever see a 40-something, friendly-faced man singing into his iPhone on a flight between Seattle and LA, chances are it’s Mateo Messina. The Seattle-born composer won a Grammy for his score of the coming-of-age comedy Juno, but he never learned to read (or write) sheet music. If inspiration strikes him while flying to LA for meetings with movie executives or on his way back home to his family and recording studio in Seattle, he sings into his voice recorder.

“A couple of days ago, an idea came to me as I was walking off the plane,” Messina says. “I sang in my phone all the way into the parking garage.” The melody will form the opening credits of his newest project, Think Like A Dog.

The family flick is just one of the projects on Messina’s docket. He’s working on music for a documentary about the 1990s music scene in Seattle while wrapping up soundtracks for two NBC series, Superstore and I Feel Bad. He’s currently writing a commission for the Anchorage Symphony Orchestra while finishing the new symphony The Feast, in a one-night performance premiering on Nov. 2 at Benaroya Hall and benefitting pediatric cancer research and treatment at Seattle Children’s Hospital.

“I wanted to convey the dedication these jobs entail,” Messina says in the purple seats of the Kirkland Performing Arts Center. He debuted one of his first symphonies here, back in the late ’90s.

Messina’s musical beginnings go back to age three, when he started playing piano. By age 7, he was writing songs. “I was not a prodigy,” he says. “I wasn’t playing concerts. And I’m sure it sounded horrible.”

By playing Michael Jackson, the Beatles and Steve Miller Band albums again and again, Messina learned to play music by ear. Now he plays all the instruments on a keyboard, so that a copyist can write out the notations for the musicians he works with, most of whom are Seattle-based.

After college, Messina performed in bands and played the piano in restaurants and nightclubs, until a college friend asked him to score his short film. Everything clicked. “I knew I wanted to become a film composer. I’d sit in on film music recording sessions in Seattle, taking notes,” he says.

One day, movie composer Angelo Badalamenti, best known for his work with David Lynch, poured Messina a glass of wine and asked him if he played baseball. Yes, explained a slightly befuddled Messina, as a kid, on the field across the lake. “So you went to the diamond to play baseball,” he recalls Badelamenti saying. “So what are you doing here in Seattle if you want to write music for films in Hollywood?”

Mere months later, Messina packed his bags and moved to LA. He stayed for 11 years, first writing commercials for big corporations until he moved on to short indie films and studio movies such as Thank You for Smoking. The director of that film, Jason Reitman, later tapped him for the Grammy-winning Juno soundtrack, Messina’s big break. Since then, he’s moved on to other big gigs, writing the music for Dunder Mifflin’s fictitious commercial in NBC’s The Office; Crossbones, featuring John Malkovich as the pirate Blackbeard; and the star-studded dramedy August: Osage County.

In the business, the score is also called an “underscore.” It’s meant to underscore pivotal moments and bolster narration, yes, but also a score under everything else, away from the spotlight. Messina’s perfectly happy in that role: “My job is to pace, keep things moving and show and tell you what the characters are feeling. And if I’m doing a good job, you don’t notice it.”