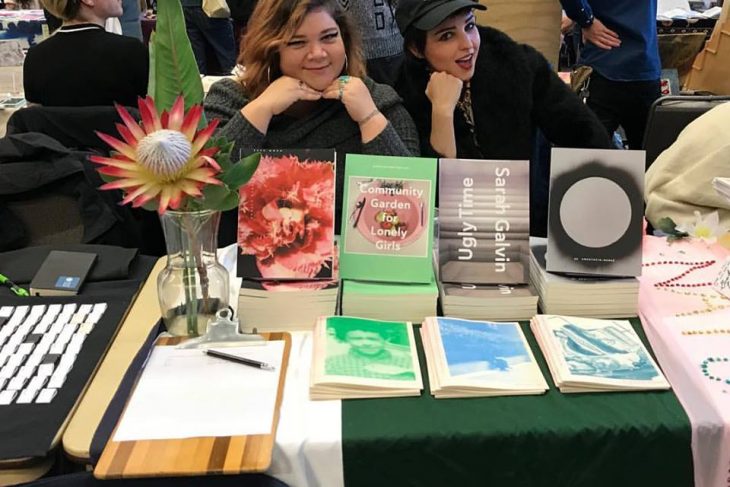 On a brisk day in February, Colleen Louise Barry and Aidan Fitzgerald are gathered around a table at Gramma Poetry headquarters. The space, adjacent to the multiuse art venue known as Mount Analogue in the Tashiro Kaplan Building, feels like a sophisticated clubhouse warmed by the glow of neon art (a bright white piece by Jonathan Monk) and peppered with a quirky cohabitation of computer screens, bulky Xerox machines and risograph printers. A giant Joe Park painting of a moonlit Cadillac hangs on one wall and a video, Euan Macdonald’s “Three Trucks,” is projected on another. A child’s vintage green go-cart is parked in the middle of the room.

“Because Colleen and I both sprouted from DIY soil, we don’t really have that stuffy poetry publisher bone in our body,” Fitzgerald says. Though Barry holds an MFA in poetry and Fitzgerald a degree in painting, both cut their teeth in nontraditional and indie publishing.

Barry, Fitzgerald and designer Michael Heck comprise the editorial spine of Gramma Poetry, a press founded in 2016 with the backing of Seattle art patron, collector and now publisher Bill True. To date Gramma has published volumes by local writers Sarah Galvin and Anastacia-Reneé, as well as by Donald Dunbar, Christine Shan Shan Hou, and a bilingual volume by Panama City-born Diana Morán. The press is weeks from releasing its sixth book, Soap for the Dogs, by Portland-based writer Stacey Tran. Initial print runs generally yield 700 copies; Anastacia-Reneé’s (v.) and Galvin’s Ugly Time are both in their second printings.

“Gramma is a new color added to the palette that seems to be a very vibrant book-art scene, whether that be poetry or art books, comics or zines,” Fitzgerald says. “I feel like Gramma is the fresh blood—not in a weird carnivorous, flesh-eating kind of way.”

Barry and Fitzgerald are already at work on the next two Gramma titles. They’re also scheduling a quarterly reading series, rolling out a new website, prepping the first Monthly Gramma (a risograph-printed broadside produced by Cold Cube Press) and the Weekly Gramma, an online magazine expanded to include video work, visual art and interviews.

“The phase we’re in is less of an overhaul and more of a realignment with what Gramma already is,” Barry says. “For me that means a lot of events and connecting Gramma to more of a physical community that’s involved in things that are beyond poetry.”

Barry became Gramma’s managing editor in January and her arrival ushers in a shift in how the press offers poetry as a way to infiltrate the everyday and create more empathetic communication. To that end, the organization is cutting back on time sucks like social media and focusing on creating beautiful printed objects, gatherings and performances experienced through the lens of language, poetry specifically.

In May Gramma is collaborating with curatorial platform Vignettes to put on an ambitious, citywide installation called a lone, featuring art and poetry on billboards, video, wheatpastes and various happenings.