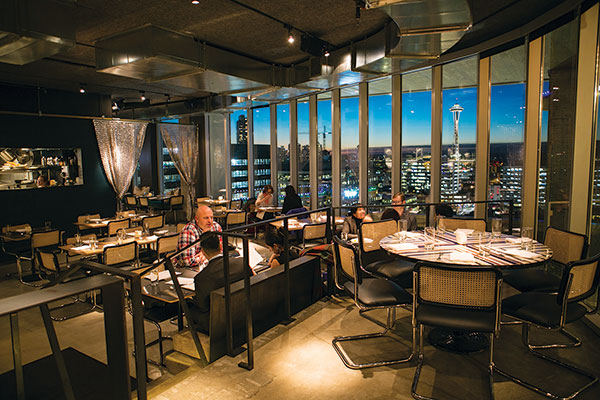 At Mbar guests dine surrounded by work by local and international artists, while taking in the swiftly evolving cityscape below.

Mamnoon, Mbar and the Harouns’ sanctuaries of hospitality

Seated inside Mamnoon on Capitol Hill, Racha Haroun’s inquisitive eyes twinkle like the talisman hanging around her neck. The same stylized eye, called a nazar, also appears on the restaurant’s menus. “It’s a good luck thing,” she says. “In Syria you see these funny winking eyes everywhere, tucked in all kinds of places.”

Racha, who co-owns Mamnoon and three other Middle Eastern restaurants across the city, knows that she and her husband, Wassef, have led fortunate lives. Born and raised in Syria, they’ve traveled broadly and earned degrees in the U.S. Neither has a culinary background—Wassef’s is in tech; Racha has a degree in psychology and spent the majority of her adult life raising the couple’s children. They were compelled into the hospitality industry by a desire to invite Seattle at large into their home, and in the process share their culture through food.

The Harouns opened Mamnoon in 2012 as a resuIt of the Syrian civil war. “I couldn’t go back home anymore,” Racha says. “In some ways it was great timing to create Mamnoon then—it was something that compensates a bit. I can’t go home, but I can almost recreate home here.” The word “mamnoon” means grateful in Arabic and Farsi.

“A lot of our culture is about understanding, inviting people over, having them enjoy food and drink, dance,” Racha says. “Throwing a big dinner party almost every night was a big, big part of our lives. Then we reached a point when we wanted to share it more with the city than just with our friends.”

Mamnoon’s menu includes staples like falafel, baba ganoush and tabbouleh, but they’re transformed into complex dishes for savoring or pairing with a cocktail. Exotic ingredients are in heavy rotation: pomegranate molasses, mint, charred lemon, walnuts, dates and spices like fennel, sumac, wild thyme and saffron. Entrees like stuffed boneless trout are girded with sides of grilled vegetables—cabbage, endive or cauliflower lightly fried to a golden crisp, served with tarator and parsley. Minced beef comes smothered in pistachio and plump prunes. Paired with Mamnoon’s take on the Moscow Mule—with kümmel, lime ginger beer and curry—then finished with honey-drizzled dessert and a glass of hot water infused with orange blossom—it’s a lavish Mediterranean meal worth lingering over.

Mamnoon Street, located downtown in Amazon’s Doppler building, offers a smaller, quicker take on the Mamnoon menu. Around the corner is the pocket-sized Anar, the Harouns’ vegetarian café. Not quite a juice bar, it features cold-pressed fruit and vegetable smoothies in the morning, spiked with dashes of rosewater or orange blossom. Gluten-free plates are heaped with a whipped red pepper and walnut dip called muhammara, avocado, lentils or Persian green hummus. The Turkish coffee is infused with a piquant dose of cardamom. 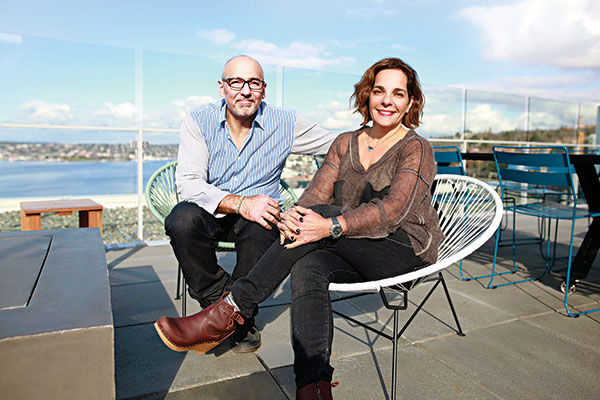 If Mamnoon is the heartbeat of the Haroun’s hospitality—they call it “the mothership”—their latest venture, Mbar, is the crown jewel. Located atop one of the tall new buildings in South Lake Union, the sprawling restaurant overlooks a sea of cranes and high-rises and, across the Sound, the Olympic Mountains. Its menu reflects the Harouns’ life in Paris and Dubai during the 2000s. Executive chef Jason Stratton combines Italian and Spanish cuisines with local ingredients: geoduck ceviche with turmeric, perfectly executed duck confit or roasted carrots with medjool dates, ricotta and sage.

Mbar also highlights the Harouns’ passion for art. The couple has been amassing a small personal art collection for the past two decades, including artists from the Middle East, Europe, and, more recently, the Northwest.

Upstairs, in the restaurant proper, walls are lacquered in a geometric mural by Ezra Dickenson, punctuated with paintings by Rashid Johnson and a neon-lit mirror by Jeffry Mitchell. Each table is unique, some created by Lebanese furniture designer Nada Debs, others featuring inlay of mosaic glass, stone or tile by artists Kate Jessup, Tina Randolph and Holly Mistur. During cold months, guests on the patio keep cozy with throw blankets hand-sewn by Joey Veltkamp. (Full disclosure: A piece of mine hangs there, too.) The bar’s pièce de résistance, and a testament to the complexities of the Harouns’ personal story, is Danh Vo’s “We the People,” made of shimmering life-size fragments of hammered copper that were cast from portions of the Statue of Liberty and produced
by workers in China.

The Harouns want their restaurants to be welcoming, beacons for anyone the city, especially now. “It’s such an important part of our mission—making people feel comfortable, regardless of sexual orientation, of background,” Racha says. “We wanted to be inclusive because we were always very included.”