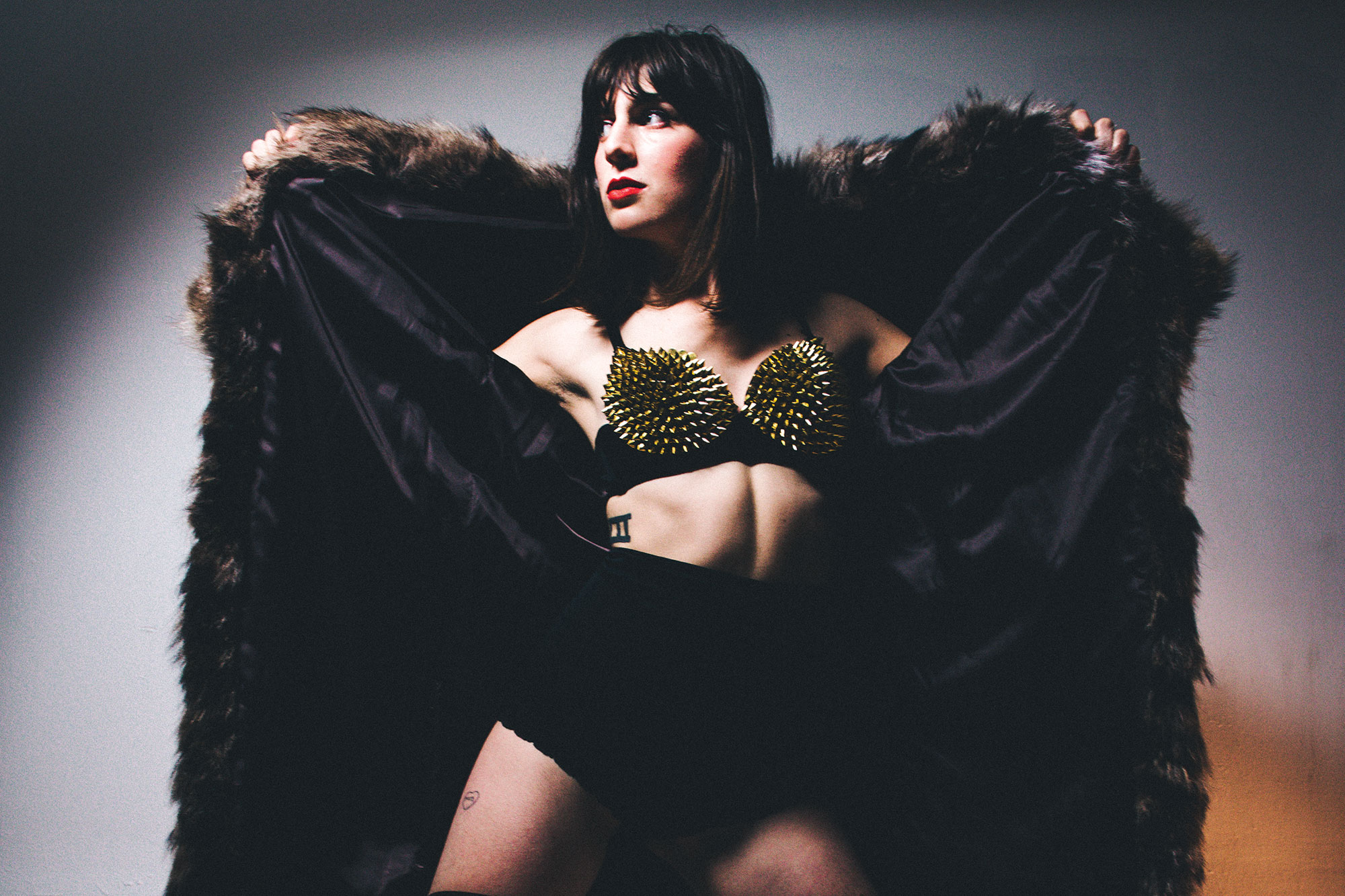 Molly Sides shimmies under red lights at the Crocodile, stripped down to undies, thigh-high boots and a studded bra, clutching a vintage microphone. She kicks one leg as high as a Rockette, whips around to throw a smoldering glance at the audience, then drapes herself across bandmate Whitney Petty whose sinewy fingers glide across the strings of a ’59 reissue Les Paul. Sides belts her lyrics, channeling Billie Holiday and the Stooges in one breath:

You say you’re hungry for something sweet,  I’ll give it  to ya
I hear you asking for it every night
Well my peach is gettin’ ripe, open up and  take a bite.

Her smoky voice quakes with vibrato before soaring to hit a high note. She writhes on the floor, tosses her hair, then grinds, lingeringly, against Petty’s leg while drummer Lena Simon explodes the room with a percussive wall of sound. The song crescendos with a roar of guitars and Sides collapses in a backbend, her bright red lips splayed open in a guttural, vixen howl.

Sides, 26, is Thunderpussy’s lead vocalist. She’s also a choreographer, dancer and the curator of Trigger: New Dance Happenings, a quarterly dance showcase. Soon she’ll add actor to that list—this month she takes on the starring role in Danger Diva, a feature length cyberpunk musical thriller about a rock singer in Seattle. Sides was born to perform.

“Dance is a language and I seem to always be in conversation,” she says. “I find it easiest to talk with my body and my movement since I’m not always the best with words. I dance to communicate. To invite. To start a conversation.”

On a hazy, hot afternoon in June, Sides sits on the sun-bleached front deck of her north Capitol Hill apartment building, shocks of long chestnut hair falling over her shoulders. Her always-wide, bright blue eyes sparkle above a smattering of freckles across the bridge of her nose and cheeks. On her left forearm is a tattoo of a diamond inscribed with the letters “TP”—short for “Thunderpussy.” (Her bandmates share the same tattoo.) Her other forearm reads “Breathe, Just Breathe.” She explains that her mother has a matching tattoo; they come from the Drew Barrymore film Ever After, not the Faith Hill song.

“I was a fucking crazy kid,” she laughs. “I’ve mellowed out!”

Sides grew up the youngest of five children in the touristy ski town of Sun Valley, Idaho. Her mother was an X-ray technician at the local hospital; her father worked a multitude of colorful jobs, the details of which she’s hesitant to share. She says he was obsessed with Elvis, wanted to be him, groomed his hair into that sweeping pompadour and cultivated a bombastic swagger—along with the superstar’s other less salubrious habits. Together the family lived in a tiny A-frame house where Sides and her older sister shared a trundle bed. It was a happy place with lots of games, make-believe, fort-building and dancing in the kitchen while they washed dishes after dinner.

“In a town like that, everybody knows everybody,” she says. Her small-town shibboleths are endearing; an occasional hint of Idaho drawl slips out. “Small talk is big talk. If we have a conversation, I will remember you. A lot of people here in Seattle don’t appreciate small talk, but you can learn a lot about somebody in a two-second conversation.”

In the little resort town overpopulated by snow bunnies, sports were also a naturally occurring part of life. “We kids were in skates from the moment we came out of the womb,” Sides says. Eager to please her father, she took up hockey. But it wasn’t until she attended a teen dance camp that she learned the basics of movement. She then initiated an unsanctioned drill team with her middle school friends, performing on the football field at halftime. Not long after, the school started its own official drill team, but Sides dropped out.

“No dude, I wanted to express myself!” she says laughing. “I was not a cheerleader.”

In 2006, at age 17, Sides left Idaho for Cornish College of the Arts in Seattle, where she studied formal dance technique in earnest for the first time and met many of her future collaborators. After graduating in 2010, she was hired as a performer by choreographer Ellie Sandstrom’s company Sandstrom Movement. Two years later, she joined the Portland-based company tEEth, founded by choreographer Angelle Hebert and composer Phillip Kraft. tEEth’s visually striking, often freakish take on the absurd provided Sides with a vocabulary of movement that burrowed into some of the dankest, most inscrutable corners of the human psyche.

“It was about finding the beauty in the grotesque,” Sides says, “and creating an atmosphere where you can really evolve in dark matter, visually, kinesthetically, sonically.”

Sides evolved in that dark space, developing a style driven by emotion rather than athleticism. Her gestures melt fluidly, intuitively from one to the next. Her eyes, limbs and gut inscribe the achingly visceral.

After splitting her time between Portland and Seattle for a year, Sides settled down in Seattle to work with KT Niehoff’s Lingo Productions and Markeith Wiley’s New Animals. In the meantime, she sang occasional background vocals for This Bitch Don’t Fall Off, a rock band founded by former Cornish colleagues. As she continued to work with various dance companies, music also became a crucial part of her process.

Sides was trying to find her own way to commingle a love of music, dance and film. She suspected a career in commercial production—maybe choreographing music videos—might be the only way to marry her interests. “I was at a residency in Milwaukee, lying on my back on the floor of a theatre,” she says. “I was thinking, I’m just tired of thinking you have to see dance in a traditional setting, paying a ticket, sitting down. I want to invite people to see dance who do not see dance very often, or who are scared to. I want to place dance in a nontraditional setting. Also, I don’t want to charge people.”

The frustration gave birth to Trigger, a quarterly dance event staged at bars and galleries. At the first Trigger, launched in October 2012 at Vermillion Art Gallery, Sides invited dancers and choreographers to take over, with no inch of space off-limits. Performers slinked and writhed across the gallery, encroaching on the crowd. One moment the stage was the floor. The next it was the bar. Then the sidewalk outside. The audience craned their necks and climbed on chairs to get a better look at the dancers who were dousing themselves in wine or performing opposite a gigantic stuffed teddy bear.

“It was ultra raw,” Sides says. “I didn’t know what the fuck was going to happen.”

Sides went on to host subsequent editions of Trigger at Love City Love, the On the Boards lobby, the Highline, King’s Hardware and Bait Shop.

While Trigger was taking off in Seattle and Sides had been commissioned to create a new piece for On the Boards’ Northwest New Works Festival, back in Idaho, Sides’ family was crumbling. Her father was in a psych ward, slowly dying of dementia, his mind and body unraveling day by day. In September 2013, the larger-than-life man—the con artist, hound dog and complex, caring father—died, leaving behind a candid autobiography filled with his many secrets. Sides couldn’t finish reading it. She didn’t know how to grieve. Instead, she did the only thing she knew to do: Turn the experience into art.

Nine months later, on Father’s Day, the curtains ceremoniously parted at On the Boards to reveal a stage illuminated by a single shaft of light. Sides lay in the light crumpled, supine, her legs tucked underneath, pinned against the floorboards. A microphone dangled from a cord from the ceiling. Barely moving, she began to sing a dirge to her father, the lyrics inaudible. A projection of a star-pricked Milky Way gradually filled the space, stars swirling in a vortex over her head, growing liquid tails and slowly melting into the long, watery wisps of tears, semen, milk.

At the end of that 15-minute piece, Sides hunched over in a ball, rocking, lost in an impenetrable void, her graceful movements deteriorated to shuddering cascades of animal spasms. She falteringly tied on a gauzy white gown, then gummed her mouth with her fist, attempting to release a word—or song—that would not come. She called the piece “I once was my father.”

“At the time I thought, you know, I might not be naked, but goddamn it, I’m naked!” Sides says. “We are all going through the world with the same fucking emotions. We fall in love, we lose people. That’s life—that’s life and death.” She searches for words to describe the significance of sharing the experience with a room full of strangers. “I want to invite people not necessarily into a sad world, but take them through the emotions with me. This is the world we’re all in.” 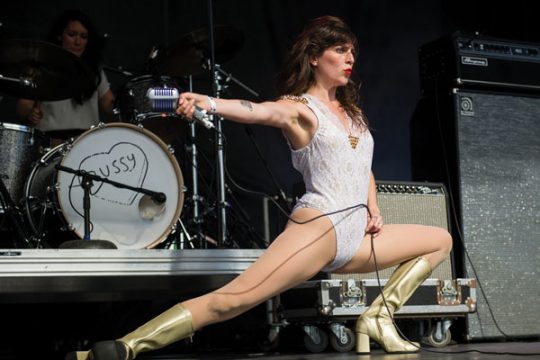 Sides performs with Thunderpussy on the opening day of Sasquatch! this past Memorial Day weekend. Photo by Christine Mitchell

It’s hard to imagine now, but that performance at OtB was the first time Sides had ever sung alone on stage for an audience. In May Thunderpussy performed for their largest crowd yet at Sasquatch!, in front of thousands. Alongside Leah Julius on bass, Simon on drums and Petty on guitar, Sides delivered Thunderpussy’s ’70s dance-rock anthem “Welcome to the Disco” and other songs she penned with Petty over the past year. They concluded with a cover of Led Zeppelin’s “Dazed and Confused.” Decked in a skintight white onesie and matching go-go boots, Sides stripped, sang and straddled speakers. Unofficially extending the performance offstage for the remainder of the weekend, the band terraformed their campsite to a Pussy Pool Party outfitted with kiddie pools, inflatable orcas, plastic palm trees and no shortage of tequila.

The transition between curating underground dance events and sprawling in blow-up pools doesn’t give her a lick of whiplash. “It doesn’t have to be just one or the other, music or movement,” she says. “With Trigger it’s about moving around the city, bringing different spaces to life. With Thunderpussy, it’s not just about music, it’s about integrating the things each of us brings to the stage: sounds, tones, movement.”

Since then Thunderpussy has spent the bulk of their weekends away from home, touring Victoria and Vancouver, BC; Bainbridge, the Willapa Music Festival in Nahcotta, Wash., Capitol Hill’s Pride block party and, most recently, Neumos for the Capitol Hill Block Party. This month they play Doe Bay Fest. In October, Sides rejoins Lingo to perform a restaging of “Glimmer” at ACT Theater. In November, Thunderpussy goes on tour, crossing the country in a vintage Ford Econoline van with a burgundy velveteen interior. They call it the Pussy Wagon.

Between this month’s band gigs Sides films Danger Diva, written and produced by OtB co-founder Robert McGinley, whose directorial credits include the 1989 low budget, post-apocalyptic skater film Shredder Orpheus. Thunderpussy is composing songs for and will be making an appearance in the film as well.

“The plot is about a diva that some investors get their hands on,” Sides explains. “They turn her voice into a weapon by creating a harmonic vocoder. I’ll be playing an ultra-enhanced human!”

A believable role for someone who does actually seem to possess superhuman energy and the appeal of a postmodern opera queen.

As she contemplates a future in Seattle, Sides looks beyond the cornucopia of her current projects—though she has no intention of cutting back on any of those. Eventually she hopes to open a multiuse art space in the city with practice space for musicians and studios for artists. Her small-town warmth has yet to wear thin.

“I want to build artistic relationships. Life is hard and we have to deal with shit all the goddamn time. I want to allow people to be present, to be included. I want to open a door—whatever door I have—and say ‘welcome’.”