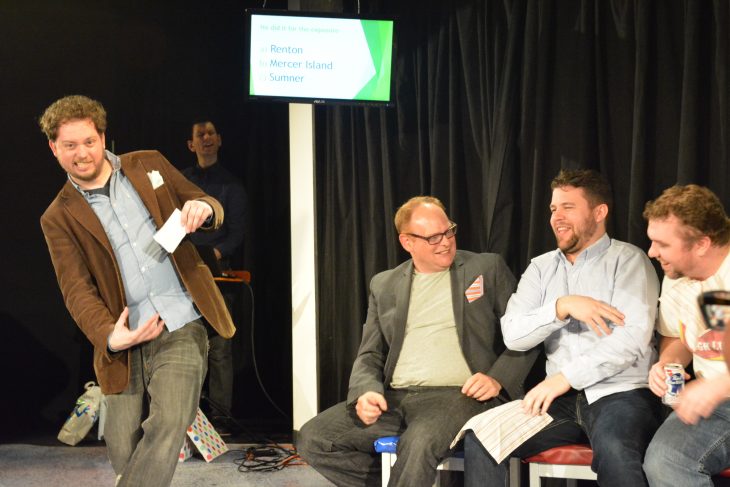 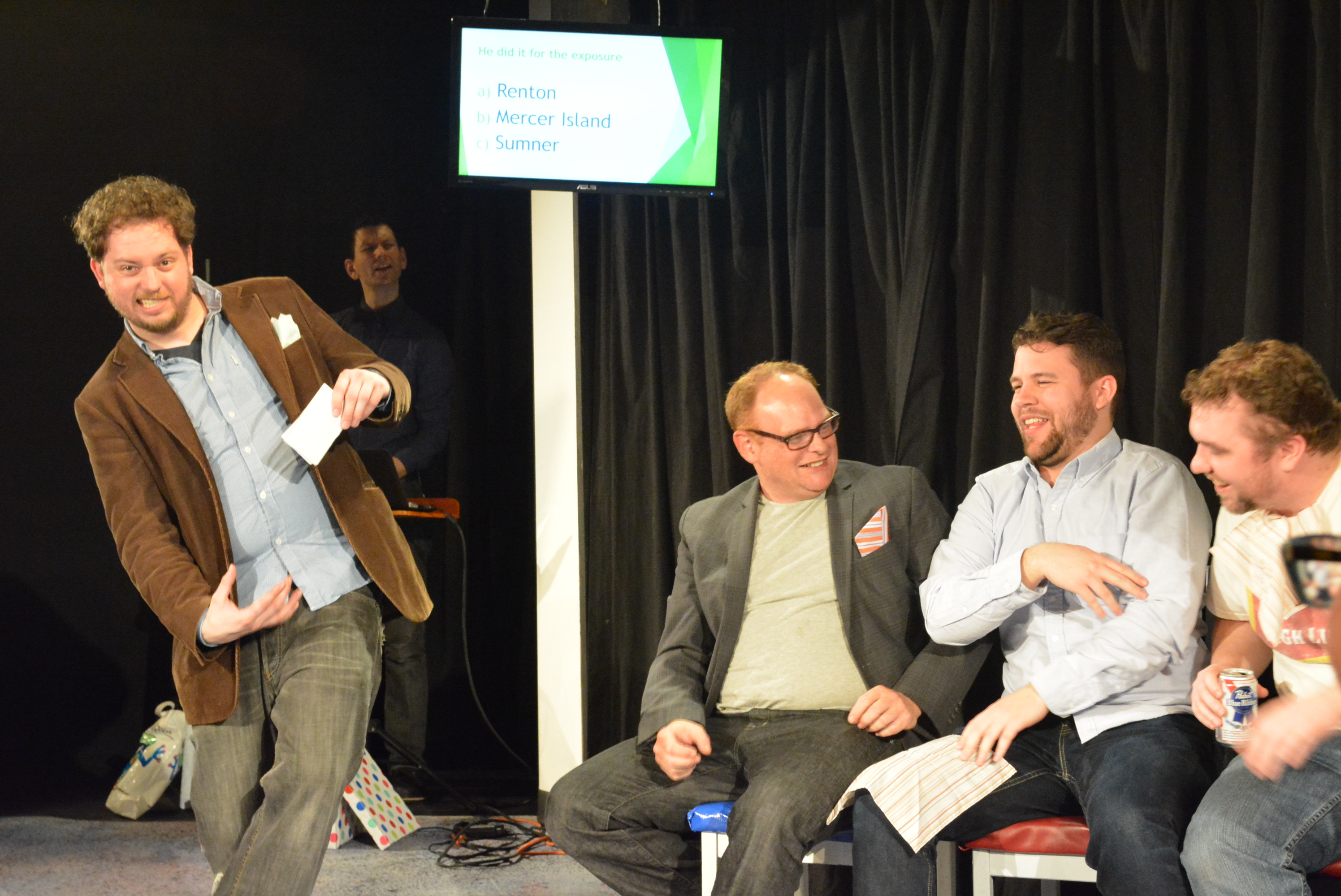 There’s nothing quite like working with people who have their shit together. This is especially true in the outland of the Seattle comedy world, where the motivating factor is almost exclusively love of the craft. That’s why the team behind Theater Schmeater’s “quiz show” Questionable Content makes me so happy. These people run a tight ship. They do the kind of steady, responsible planning and thorough organization that enables a show that is freewheeling and rambunctious without spiraling into chaos. Simply put, it feels like a real show.

As a first-time panelist on Questionable Content last month, I was on a team with two other comics; we were facing a trio of luminaries from Jet City Improv. The crowd was packed with people who had clearly been to the show before—they were jacked up and I soon found out why. Host David Rollison is one of those people who was probably voted “most likely to be a game show host” in high school (“I want this to be a show for people who think they don’t like ‘shows’ at ‘theatres’”). Projecting an easy confidence, he doles out a perfectly balanced mixture of encouragement and ridicule.

After warming up the audience, Rollison calls us all out; we stride into the fray and take our seats on opposing sides of the diminutive, black box stage. When our individual names are read, the crowd cheers for each of us, even me—and they certainly don’t know who I am. Eventually, team names are chosen by the host from a selection of options provided by the audience. Generally the names involve profanity. This is definitely my kind of show.

The game begins and I’m lost. I was expecting trivia, but this is far more of a game show than an actual game with rules and fairness and all that garbage. During a segment in which panelists are charged with identifying the contents of a concealed portion of a photograph, Rollison is unreasonably generous in offering hints. My team is shown a photo of a street with the upper left corner blacked out. I have no idea what could be there.

Sure enough, it’s a picture of a house in England with a shark sculpture sticking out of the roof. As far as trivia is concerned, it’s hardly Jeopardy. But when the shark is finally revealed, everybody goes nuts. The rest of the show unfolds in much the same way—pursuit of laughs and excitement above all other concerns. Most of the questions are about subjects either local, contemporary or both. There’s a police blotter quiz, in which panelists try to figure out in which neighborhood some horrifically disgusting incident transpired. The best segment is “Prized Possession,”a riff on To Tell the Truth with inanimate objects. There are winners and losers, but mainly the bit is designed to bring the best out of the comedian panelists, and all of this madness is kept moving briskly along with host’s jocular badgering.

While Rollison is the resident agent of chaos, “The Scorekeeper”, aka John Munchak, counterbalances him by accurately keeping tabs on everything and running the (rather elaborate) visual tech. There is a wonderful, testy banter between the two. Munchak, while also quite funny, keeps the thing bolted to the ground.

A lot of the people responsible for keeping this thing going aren’t actually in the live show. Miranda Holtmann is the creator and behind-the-scenes powerhouse. She handles coordinating and editing—“I kind of do a little bit of everything that doesn’t require me being on stage.” Most of the writing and internet research is handled by Martin Stillion, Michael Crowley and Jennifer Parker. It’s a big team with lots of duties to perform, but their hard work pays off on stage. “Man, they bust their asses every month,” says Rollison.

Part of that work is wrangling panelists from all over the comedy world. In any given show, you might see folks from standup, improv, sketch, drag or theatre. “What I love about the show is that it allows every panelist to be comfortable as themselves,” says Munchak. “Everyone’s personalities shine through, and the laughs come naturally.” The QC team clearly has a lot of affection for their panelists and the Seattle comedy community at large. As Rollison points out, “There are so, so many awesome and talented people in this town.”

The show runs just under two hours, including an intermission. It starts late: 11 p.m. on Friday and Saturday. Alcohol is not unrelated to the fun, both on stage and in the crowd. My show finished up around 1 a.m. and everyone trudged out onto the streets of Belltown a bit bleary-eyed, but happy. I look forward to enjoying the show as a spectator; it seemed like everyone in the room was having an equal amount of fun. All of that hard work and dedication is paying off—and that’s how it’s supposed to work.

The next Questionable Content shows are on Friday, May 8 and Saturday, May 9 at 11 p.m.