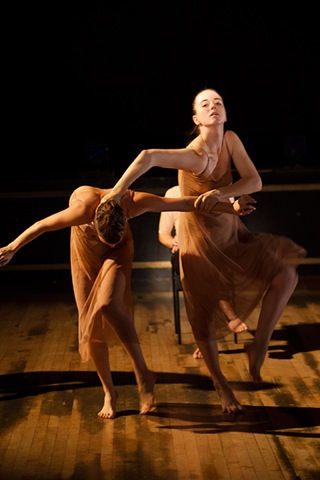 Last Friday was a double premiere for Danielle Agami, the Israeli dancer and choreographer who presented Sally Meets Stu with her newly formed company, Ate9 at the Century Ballroom. The multi-dimensional work (dance, narration, stunning lighting) captured the beauty of the movement of the human body while presenting the many avenues of possibility—experience has unlimited potential. What can that mean for you?

For Agami it meant exploration through the trope of relationship. In Sally Meets Stu the titular characters were led through a series of scenarios by dancer and narrator Nadav Heyman—the results varied from a happy marriage to a scene where Sally turns on the news to find Stu in one of her skirts on a gay pride float. Each string of narration started with Sally meeting Stu. Although a limited number of possible narratives were verbally explored, with each initial “meeting” between the two we are reminded that the story can go, quite literally, anywhere.

But the performance wasn’t merely the acting out of multiple storylines. Using the Gaga technique—an Israeli style of contemporary dance that uses movement, and specifically the body, to promote self-awareness. Drawing on all forms of dance and movement, Gaga encourages improvisation and instinctive motion. Agami’s dancers (including Kate Wallich, Matt Drews, the gorgeous Sarah Butler) moved with an underlying grace—even in their largest, wildest motions their dance training was evident. Agami’s choreography was a mix between group work and individual expression. At times the company would do a short synchronized section, then break out into individual movement phrased within the whole. At other times there would only be one or two dancers on stage. Without making a particular comment on the idea, the choreographer vividly illustrates the tension between society and the individual.

Both the emotional and physical range of the dancers was impressive. Even the jerky, spasmodic movements that initially strike us as ugly (or that we perceive that we should think as ugly) took on a graceful beauty—as much a product of the dancer’s stage presence than the execution of the move. The Adonis-like Matt Drews partnered with several of the female dancers in a tender display of sensuality; motions as small as the caress of an arm were charged with limitless emotion.

The most striking part of the show was towards the end when the lighting went dark and small vignettes were exposed by flashlight. In the eerie orb, dancers acted as much as danced random daily scenes—a family preparing a meal, a pop star performing on a stage, a completely naked woman striking a pose. The ghostly, haunting scenes eventually give way to a huge company dance—a celebratory performance full of rhythmic stomping, hip swinging and limbs thrown asunder. It is a beautifully stark visual reminder that although the world can be a lonely and isolating place, there is means for joy in the gift of life.