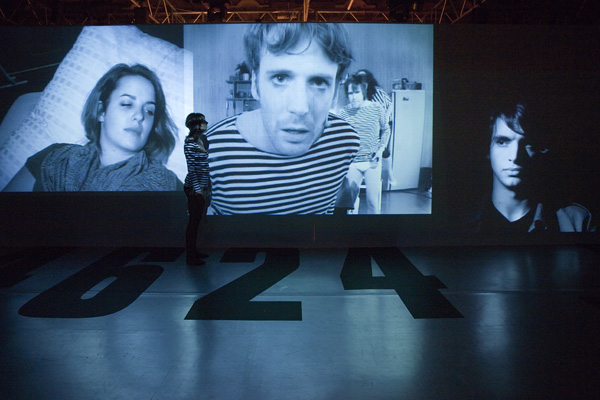 Let’s go back to May for a minute.

Julie Andrée T., a performer from Montreal, is onstage at On the Boards. Her white t-shirt is soaked through with red juice from a red pepper she feverishly masticated like a feral child promptly after walking onstage. She spends the next hour playing with red things, red lights, red liquids, feeding red candy to a red skeleton. “What color is this? Red!” are the only words she howls or whispers for the duration of the piece.

Sometimes a performance is staged that’s either so annoying, so long, or so bizarrely opulent, it lives on as a real stain in the memory.

Andrée T.‘s Rouge was like that. My initial response to Rouge was “meh.” Though Andrée T. was channelling everything I adore about the enfant terrible in the French cabaret tradition (the hysteria, echolalia, the absurdity), I felt annoyed. In hindsight, the performance worked perfectly because it needled the audience in just the right way. Its hysterical one-dimensionality effectively possessed me and continues to haunt me. 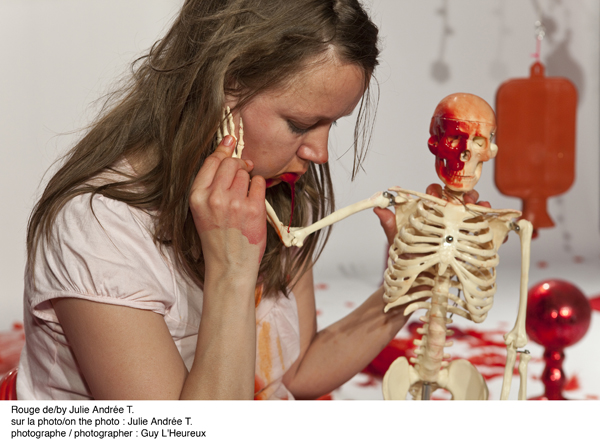 You never know how a performance is going to hit you.

Last night was the debut of Gob Squad’s Kitchen (You Never Had It So Good) at On the Boards. Gob Squad is a group of performers from the UK and Germany. They stage shows that incorporate passersby and audience members, drawing them in and eventually fully integrating them as actors in their performances. For Kitchen, Gob Squad is remaking Andy Warhol’s famous Kitchen, Kiss, Sleep and Screen Test movies in real time in front of the audience. The idea of audience integration in Warhol’s glam-glitter-”vitamin”-fueled world of exhibitionism is titillating and vaguely meta in just about every way. We are the YouTube/reality TV generation, after all (as Gob Squad emphatically reiterates). We’re collectively living a continuous Warholian screen test, interchangeable actors under constant surveillance.

Technically-speaking, Kitchen is engaging. A huge screen stretches across the stage. It feels like a movie theater. Hidden behind the screen are a series of sets: a pink-wallpapered kitchen with table, fridge and shelves stocked with tea and cereal; a mattress on the floor surrounded by microphones and cameras; a screen test room outfitted with a couch and more cameras.

As the show starts, the audience is filed into the theater and promptly escorted through the behind-the-screen set by the Gob Squad performers, who are in Warholesque costume, heavily decked in false lashes and caked makeup.

It’s a B movie version of Warhol.

Once the audience is seated, the show takes off in a flurry of funny dialogue. The performers try to channel the 60‘s, try to reconcile on-set anachronisms like the box of Barbara’s gluten-free cornflakes or decaf black tea. They do lines of coffee off the kitchen table. They talk about patriarchy and Lady Gaga and soliloquize about space flight and atomizing into space dust. It’s pretty poetry at times, doggerel at others.

They eventually do solicit audience help. A young man is selected to sit for a screen test. Another woman is chosen to step in as the subject of Sleep. However, it’s still completely scripted, and the new layman-performers are dictated lines via headsets. There is little margin for improvisation or happy error. Is this very Warhol, or not at all?

Not that Gob Squad is really trying to channel the zeitgeist of Warhol and his entourage. Warhol’s films are really just a launching off point for their particular kind of theater, so if you’re a Warhol superfan, there may not be a lot here for you. Where Warhol is deadpan or sincere or ironic, Gob Squad’s Kitchen is pure farce, a slapstick exercise in the parodic and post-historical. It’s entertaining, and the parlor trickery of the sets are great, but thought-provoking connections to history and audience are thin.

Nothing criminal there. But it’s possible that Warhol could have been better appropriated in this instance. Or why appropriate his work (so loaded) at all?

Warhol is in the air (and, er, on the shelves at Target) lately. Timothy Rysdyke recently exhibited some photographs and videos at Cairo based on Warhol’s screen tests. Incidentally, I sat for one of them. It was a fairly by the book reconstruction, and sincere. Rysdyke’s recreations are uncanny and immediately highlight temporal and cultural gulfs between the 60’s and the present. Can a sincere reenactment of Warhol’s work tell us more about ourselves and our culture today than a farce? Will a farce stick in our memory the way Rouge or Sleep or Kiss does? I guess time will tell.