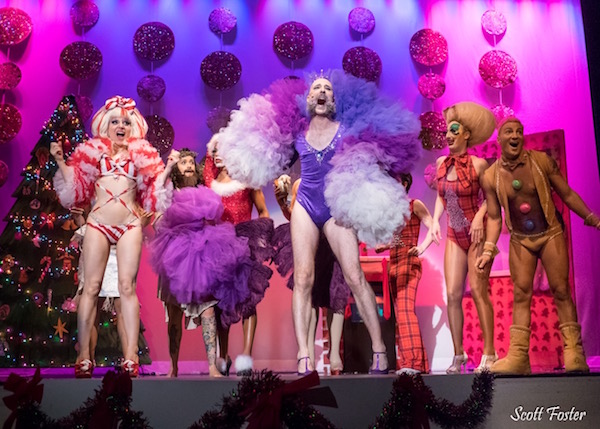 The cast of 'Homo for the Holidays,' photo by Scott Foster

If you’ve had it with this lump-of-coal year, Homo for the Holidays will assuage your spirit with a big dose of laughter, a few sultry dalliances, and a much needed feeling of holiday togetherness. The show is in its ninth year and it’s only getting better. There are repeated numbers year to year, with plenty of 2016-specific material to keep even seasoned fans satisfied. For those new to the DeLouRue holiday production, what should you expect? Larger-than-life costumes, a dash of risqué fun, and political parody lyrics that put Weird Al to shame. Not to mention heartfelt Christmas cheer, served with a big ol’ dollop of queer.

As always, BenDeLaCreme is the glamorous mother hen who runs the show. That is until a feminist angel (Kitten LaRue) arrives on the scene, dead set on earning her heavenly wings. The all-star cast features Seattle household names Cherdonna Shinatra, as herself, and Waxie Moon as a narcissistic, social media-obsessed Sugar Plum Fairy. New to the cast are Rebecca M. Davis and Danny Kam as Jewish neighbors Menorah Lezowitz and Dreidel Rosenbear. Their singing prowess is put on display in a Chanukah-themed pop medley that will have latke-lovers in stitches. And I would be remiss not to mention The Luminous Pariah, who plays perhaps the steamiest Santa of all time.

There are definitely sexy moments, but humor is a constant. The characters’ personalities infuse the choreography, keeping each strip tease distinct and interesting. Candy, the peppermint-striped character played by The One The Only Inga, contrasts her seduction with a dry, sardonic edge. She walks her fingers down her long stockings temptingly before rolling her eyes and unceremoniously tugging them off. She knows what we want, but absolutely every move is on her terms, making her all the more alluring.

On the other hand, Cookie, played by Faggedy Randy, shows his boyish sweetness as he tries (and fails) to resist a tall glass of milk. “I wish I were those candy buttons,” confesses the woman next to me, referring to the large glittering baubles Cookie pops off his perfectly gingerbread-tan abs. The show provides plenty of eye candy and booty shaking, but the spirit of the show feels wholesome enough to take your mom to. Interwoven are scenes like Lou Henry Hoover’s dance, in figure skates, that perfectly captures that first wobbly glide onto frozen ice.

There is an abundance of great drag and burlesque in Seattle, but Homo for the Holidays does a few things that elevate it above and beyond. The show feels constantly surprising because it keeps remaking itself over the course of the evening. There are seemingly endless costume and set changes, each of which out-sparkles the next. Props enter and exit with laser-precise timing to help tell a story or land a specific song lyric. And just when you think you know a performer’s shtick, they come back in the second act with a whole new skillset.

Another distinction for Homo is that rather than just variations on a theme, every single campy song, sizzling dance number, and touching monologue fit seamlessly together into an overarching narrative. There’s character development, conflict and intimacy. When earnest and neglected Jesus (ilvs strauss) gets a birthday phone call from “Dad” (along with a little romantic advice), it’s a collision of gayness, religion, family and philosophical wonder. This isn’t what’s normally expected from a drag show, but this cast of queers can pluck the heartstrings of even the Grinchiest Scrooge.

“Chosen family” is a term often used by the queer community to describe a loving support system outside their biological family. When BenDeLaCreme talks about chosen family at the beginning of the show, it’s framed as an invitation. This is not a show just for the LGBTQ community, or just for Capitol Hill hipsters, or just for people who celebrate Christmas. There’s a seat for everyone at the table. Give Homo a try with your loved ones and you might just find yourself with a new holiday tradition.

Homo for the Holidays runs through Dec. 26