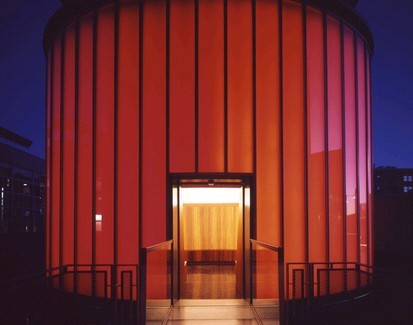 Wednesday, Aug. 18 – Sunday, Aug. 21
The Williams Project is back with one of Tennessee Williams’ most famous plays, The Glass Menagerie, presented in an ambitious, unusual way. For those that don’t know Menagerie, it’s set in the cramped St. Louis apartment of the Wingfield family, and builds to an important dinner party for a gentleman caller they all hope can change their lives. This production in the Café Nordo space invites the entire audience to join in that dinner—as the scene unfolds, everyone is served up a three-course meal of Southern favorites. The Williams Project is made up of phenomenal actors from around the country, all of whom have the chops to pull off this intimate classic with a twist. The Glass Menagerie runs through Sept. 3. –Gemma Wilson
Nordo’s Culinarium

Thursday, Aug. 18
For you art-nerding night owls: The Henry’s “The Untuning of the Sky: Moon Gazing in the Skyspace,” offers an excuse to stay up past your bedtime on this full-moon evening for a come-and-go program of moon-gazing, storytelling and experimental film. James Turrell’s Skyspace Light Reign will provide a lens through which to see the lunar satellite anew, while Dutch artist Melvin Moti presents the world premiere of his film Cosmism. Elsewhere on site, Roger Fernandes will recite traditional tales based on the lore of First Nations, musician Kyle Musselwhite presents a talk on the music of the spheres, Amaranth Borsuk and Carrie Bodlea stage a participatory poetry reading, and Michelle Hagewood offers the opportunity to paint en plein air by the light of the moon. –Amanda Manitach
Henry Art Gallery

Friday, Aug. 19 – Saturday, Aug. 20
There are two component pieces to Chomp!, King County’s local food and sustainable living festival happening this weekend at Marymoor Park. The first is Friday Night’s Dinner in the Park, a five-course outdoor dinner to benefit FEEST, a Seattle nonprofit that brings healthy food and food education into low-income communities. With Dow Constantine as host and food prepared by George Quibuyen (aka Prometheus Brown of Blue Scholars) of the Food & Sh*t popup, Dezi Bonow of the Carlile Room and Leslie Mackie of Macrina Bakery, expect a sumptuous epicurean experience in a gorgeous setting. The second, free for everyone, runs from 10 AM–6 PM Saturday, when Marymoor Park will be full of farmers, chefs, food activists and educators hosting demos, games, interactive classes and group conversations about all things food-related. There will also be tons of live music throughout the day. Whichever way you go—or hell, go both ways!—Chomp sounds like a delicious way to spend a weekend. –Jonathan Zwickel
Marymoor Park

Saturday, Aug. 20
Join Shayla Alarie—Davidson Galleries’ Director of the Antique Print Department—to dig into Goya’s “Disasters of War” series, now on view at the gallery. The show is a timely complement to Seattle Art Museum’s Graphic Masters exhibit, which features Goya’s complete Caprichos series (Caprichos being the more nightmarishly dreamy, gothic and grotesque social commentary in contrast to Goya’s relentless documentation of a war-torn Spain in the early 19th century, before the advent of photo journalism.) Maybe that description makes it sound a little dense and morbid for a summery, gallery-hopping weekend afternoon, but Alarie’s expertise and light touch will make for some valuable edutainment, and Seattle Print Arts is throwing some nibbles and refreshments into the mix. –Amanda Manitach
Davidson Galleries