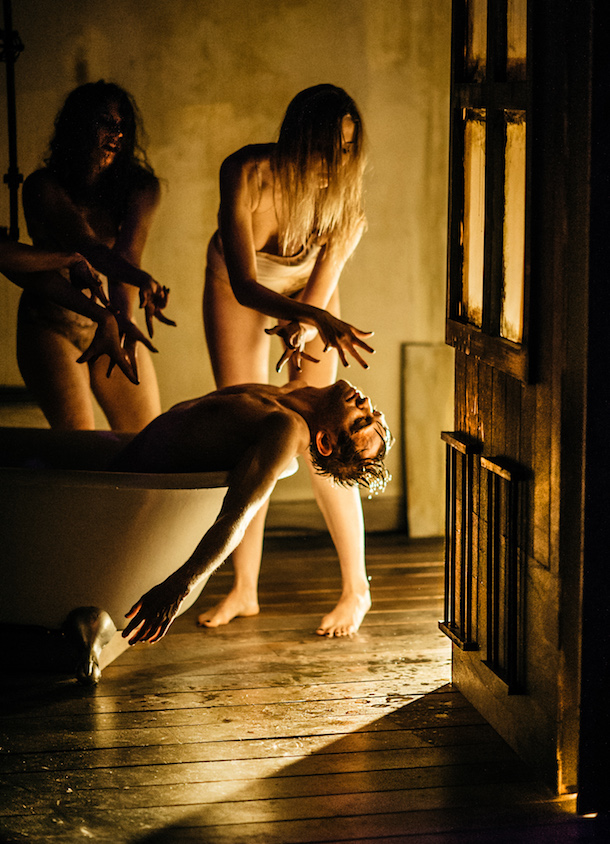 It’s a classic story. Boy meets girl. Boy is actually a prince in disguise and engaged to someone else. Girl dies of a broken heart and joins a gang of vengeful ghosts.

Romantic-era ballets are ripe for sexy, modern retelling, and dance company House of Verlaine specializes in presenting “hedonistic classical fantasias.” Their interpretation of Giselle, conceived and choreographed by Rachel Gourd and performed Aug. 31 and Sept. 1 at the Triple Door, promised to be a sumptuous evening at the ritzy dinner theatre, but missed the mark.

The entire first act of the original 1841 ballet is condensed into a short pre-curtain ditty in which a disguised Prince Albrecht woos peasant girl Giselle while his blindfolded fiancé, Bathilde, dances alongside, “in the dark” about the affair. Then Giselle’s jealous suitor, Hilarion, unmasks Bathilde and reveals Albrecht’s duplicity, prompting Giselle’s untimely death.

At this point, the curtain opens on a haunted house set. Time, location and premise change suddenly, as if we had all just awakened from a dream. The previously uncouth Hilarion inexplicably rouses Giselle and carries her onto the set as if they just been on a date, and happened to come across this abandoned house just in time to take shelter from a storm. Hilarion removes the white sheets covering the furniture, awakening the wilis lying beneath, vengeful spirits of unmarried women. Invisible to the happy couple, the wilis undermine their sweet courtship—a tender moment across a table is really across the body of an unseen wili; the wilis entangle the couple as they get steamy on a couch, torsos undulating and long legs wrapping around their bodies like talons. Consumed by the throes of passion, the lovers don’t even realize they’re being called to their deaths like sailors to sirens. It captures that sense of sexual danger, of letting go and losing oneself in carnal instinct.

Despite some clever moments of storytelling and the dancers’ lovely technique, there’s not much here in the way of choreographic interest. There’s a lot of slow, ghostly wafting about to somber music that lacks dynamic shifts. The predictability makes it hard to believe the scary things are scary, or that the sexy things are sexy.

The second act opens with a more promising section: The wilis perform fast, jumping footwork in shifting line patterns, interspersed with menacing, floaty posturing, finally creating some dynamics and spatial interest. But the original lady ghosts are joined by male wilis, which dilutes the potency of the original story. The reversal of gendered power dynamics, the idea that the innocent virgins become monsters with the power to dance men to death is central to the narrative of Giselle, and weakening it undermines the compelling and potentially sexual idea of female power over life and death.

Another orgy eventually distracts Bathilde long enough for Giselle to exact her revenge on Albrecht, dominatrix-style, but at the last moment, she has a change of heart and the living couple runs away unscathed, leaving Giselle alone in her sadness. The final scene is a strange solo of wallowing, where Giselle takes her top off for unknown reasons, and instead of a symbol of sexual power, the nudity feels like loss and vulnerability. It’s hard to know what lesson to take away here. The cautionary-tale aspect seems at odds with the sex-positive exposition, I’m not sure who the protagonists are. And with all the death and reawakening, every character feels disposable.

House of Verlaine tried something new, which is admirable, but lands neither here nor there—not bawdy and fun enough to succeed as burlesque, too surface-level to exist as an epic tale of deep love and loss. House of Verlaine created an uphill battle for themselves when they draped everything—the lights, sound, costumes and dancing—in a thick coat of melancholy. There is nothing less sexy than sadness.

Everything we’d been missing for the last hour, however, finally made an appearance in the last bit of the evening—a preview of their “in development” Romeo and Juliet, which glitters with potential. With giant feather fans and scantily-clad bodies, the dancers interact playfully with the famous Prokofiev score, portraying a glitzy version of the Capulet ball where the star-crossed lovers first meet. A gender-swapped Romeo is played by Lara Seefeldt, whose lively impishness we never got to see in her role as Giselle. A queer love story would be a refreshing angle on the classic tale, and if it’s anything like the preview, the tone will be just right.