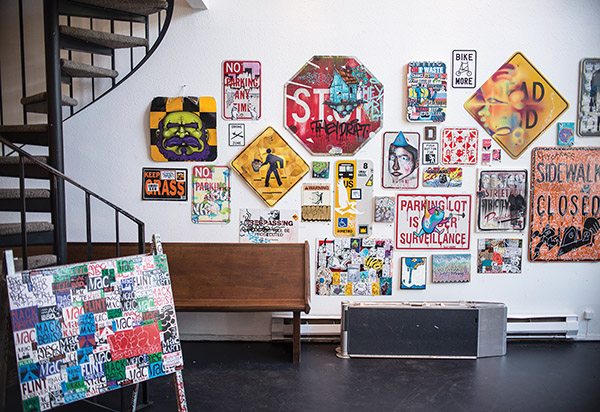 Inside Art Primo’s storefront gallery on Capitol Hill, a group show of Banksy-esque street art covers two walls with stickers and graphics on street signs. Meticulously arranged racks of art supplies line the back of the shop behind glass cases filled with high-end paints, watercolor pens, acrylic markers and specialized nozzles. An old black dog named Inky supervises Art Primo’s Dan Melbihess as he touches up the white paint on the baseboards.

“Pretty much anybody can use our products,” Melbihess says. “Fine artists, crafters, drafters, DIY people. They’re far superior to anything you’d get at the hardware store—the quality of the pigmentation, the amount of colors, the type of valves that they use.”

Art Primo opened its Pine Street shop last October, but the company began in the early 2000s when a group of friends involved in graffiti art launched a website to sell graffiti supplies. The company has since grown to 10 full-time employees but maintains the spirit of its collective origins. “It’s a team effort of a small group of people that run the company—almost like a collective. There’s no real boss but we all take leadership roles,” says Melbihess, who maintains the shop and designs its advertising. He also curates wall space at the Judkins Park bike polo court.

Angelina Villalobos has been a part of Art Primo since its inception; today she manages the store’s Seattle warehouse, does graphic design and organizes community mural projects. “One of the advantages of being one of the early forerunners of the graffiti supply industry is we develop a lot of the products,” she says.

Art Primo is the North American distributor for a number of European products, such as Molotow, a durable German spray paint derived from an automotive formula. “That’s the product that put us on the map,” Villalobos says, explaining that there is no American-made graffiti paint. Molotow comes in a spectrum of 250-plus colors and boasts a consistent, drip-resistant consistency. “Like using an airbrush on a bigger scale,” Melbihess says.

Art Primo’s website remains the primary focus of the business, selling scores of different paints, markers and inks to artists, retailers, wholesale customers and industrial companies. Because aerosol is heavy and illegal to fly without heaps of paperwork and considerable expense, the company fulfills orders by ground from a Seattle warehouse (aka the Batcave, because of its secret location) and a second location on the East Coast.

Every month Art Primo’s shop hosts shows from genres ranging from street art to fine art. Painter and illustrator Zachary Rockstad recently exhibited there and in June the shop will celebrate Pride with a Keith Haring-inspired show. It’s also curating a hip-hop graffiti exhibition at Folklife this month.

“The city’s starting to embrace us,” Villalobos says. “Before they let us fly under the radar but now we’re being called upon—and that’s because the acceptance of graffiti is now in the public eye as a positive force.”