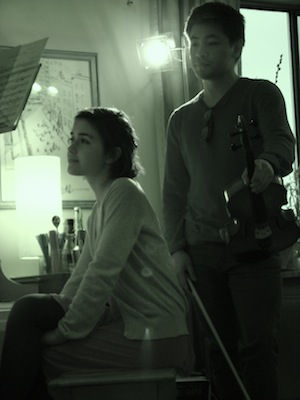 On a recent Saturday in June Seattle has, true to form, decided to bust out its most dreary raiment just in time for the weekend. Dull gray cloud cover envelops the horizon line west of Jeff Powell’s Capitol Hill apartment, but Powell, an occasional singer with the Seattle Men’s Chorus, remains resolutely buoyant. He’s hosting a special house party at his place, one where the soundtrack isn’t being provided by a DJ or a scruffy indie-rock band.

A trio of classical musicians—soprano Emma Rose Lynn, violist Justin Almazan, and pianist Tania Rivers-Moore—are playing this particular gathering, the first Groupmuse presentation in Seattle. Founded by 24-year-old Columbia University grad Sam Bodkin in Boston last year, the Groupmuse social network helps classical musicians, audience members and prospective party hosts play, attend and host events that fall somewhere between chamber music concerts and house parties. Prospective hosts input their location, preferred crowd size, and the date on which they want to hold a party on the site, then the site’s team looks for musicians in the area. Finally, upon the host’s approval, the site allows folks who’ve registered as partygoers to RSVP.

San Francisco and Austin are among the other cities that have recently started their own Groupmuse branches, signaling a growing movement to rehabilitate classical music’s stodgy and intimidating reputation among general audiences. Lynn (a voice major at Macalester College in St. Paul and a private voice teacher at Mount Vernon High School) applauds this sea change as she greets incoming Groupmuse attendees. “My mission in life is bringing classical music to the public,” she says. “That’s what I’m really passionate about, and that’s what this organization does.” Lynn first heard about Groupmuse, she explains, from a friend studying at Northeastern University. Inspired by the platform’s mission, she emailed founder Bodkin about starting a Seattle chapter. Within days of their initial exchange, the singer was connecting with Powell and the other musicians over coffee at Vivace.

From there, Powell says, “We all got together and just used the guidelines that were already established [by Groupmuse] to make it happen.”

Powell takes on his hosting duties with aplomb, gliding through his apartment, hugging old friends and introducing strangers to one another. Groupmuse began as a way to turn on millenials to classical music, but Powell’s approved and invited twenty-and-thirty-somethings, Gen-Xers, and Baby Boomers alike to his event. He credits a recent NPR segment about Groupmuse with opening his eyes and ears to hosting. “I loved the idea that it was targeted towards anyone that loves music,” he says. “Classical music doesn’t have to be all hoity-toity like Frasier.”

The performing trio acquits itself ably. Lynn’s warm soprano shines during a haunting reading of Gershwin’s “Summertime,” Almazan delivers an expressive solo tango on viola, and Rivers-Moore navigates the set of compositions by French composer Gabriel Faure with nimble finesse. The ensemble’s youth (the players range in age from 20 to 24) and the intimate setting lend earthiness and urgency to their performances. Audience members sit at rapt attention, punctuating each piece’s conclusion with hearty whoops, whistles, and spontaneous applause. It’s light years removed from the respectful but frosty reception allotted to more formal classical music presentations, and a close kindred spirit to similarly-informal recitals by composers like Schubert and Haydn back in the day.

A final wave of enthusiastic applause fills the apartment at the recital’s completion, and Powell passes a large punch bowl around to collect cash donations (the only form of revenue for Groupmuse musicians). He’s gratified that, by his estimate, a third of his guests saw their first classical recital this evening, and that people who started out the night as strangers are continuing to socialize long after the performance has concluded. “I’m just doing my little part to chip away at the Seattle Freeze,” he says with a laugh.

Lynn brushes past Powell, chuckling at his quip and drinking a well-earned glass of water. She’s accrued a fair amount of contact info from party-goers eager to host future Groupmuse events, and she lights up at the reception she and her fellow musicians have received. “Classical music is a living and breathing organism,” she enthuses, “and I think this type of atmosphere is where it flourishes the most.”

[For information on hosting or attending local Groupmuse events, check out www.groupmuse.com.]