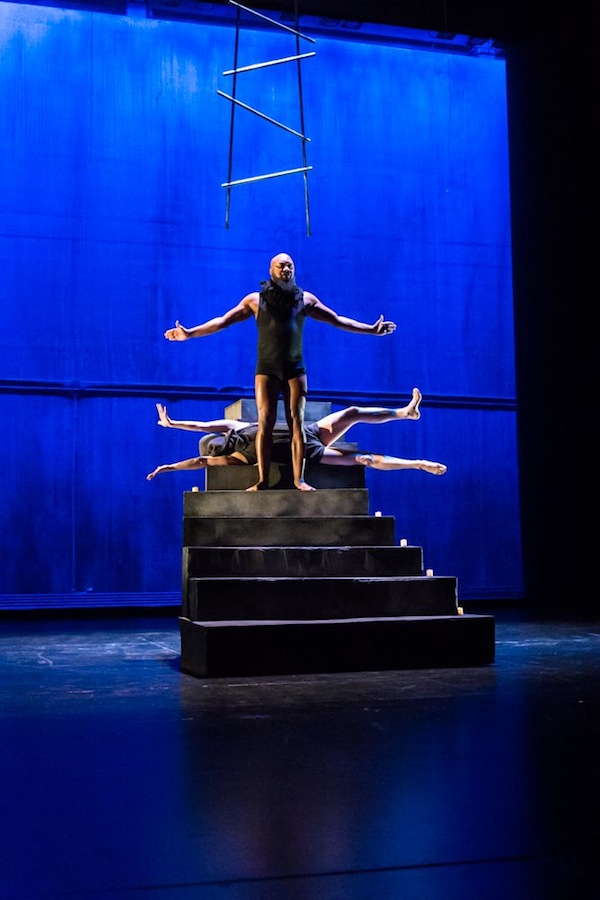 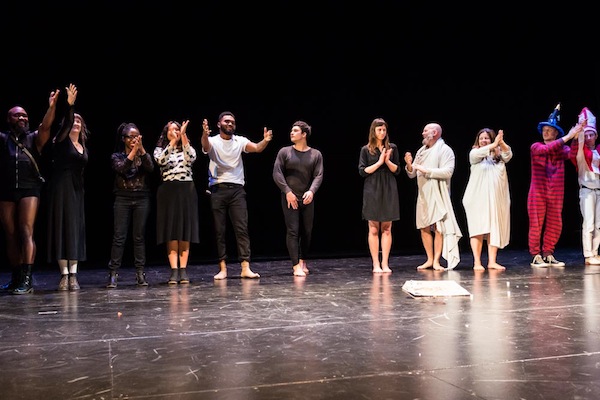 Last weekend, after months of collaboration kept under wraps, five inspired and inspiring performances from 10 talented local artists were revealed as Genre Bender 2015 finally hit the stage of the Cornish Playhouse. Themes of self-reflection, seeking and spirituality permeated the evening, though they took myriad forms. Haunting music rang through the room played on everything from cello and bass to crystal bowls and crystalline voices. There was subversively cheeky poetry, hallucinatory film, experimental theatricality and physical stage magic. Rapping and memoir, animation and acid and more and more and more. Thanks to all of you brave, exploratory arts lovers who came out and made these two evenings so electric—check out the wonderfully weird performances below, and click through the slideshow for way more images. See you next year! Photos by Robert Wade and Bruce Clayton Tom.

“Ritual. Resistance.”
The physical grace and power of aerialist Lara Paxton joined the celestial voice of okanomodé in the first piece of the evening. These two magnetic performers collided music with ritualized movement, kinetic percussion with a rhythmic, spoken word presentation that cast a winking glance on any self-seriousness. 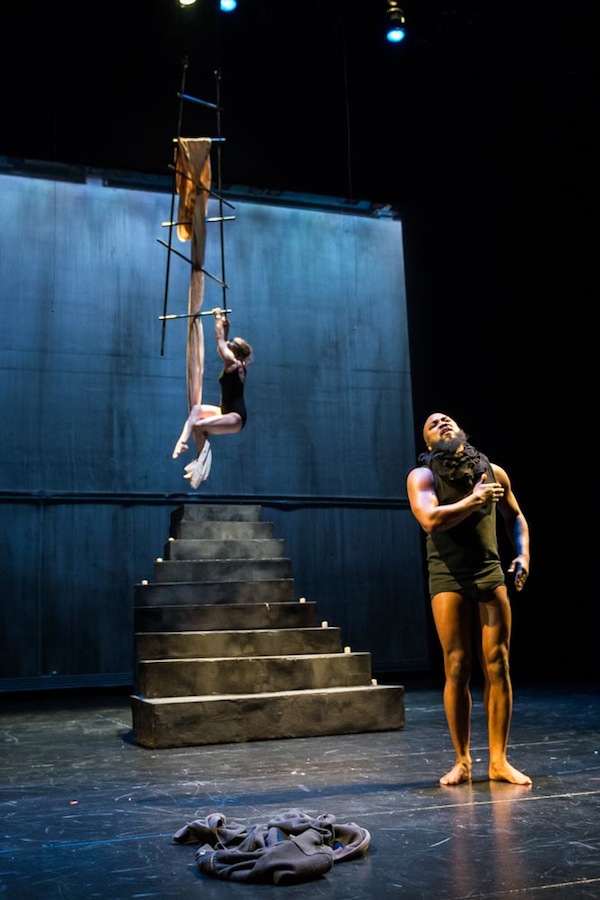 “A Certification of Specialness“
Poet Sarah Galvin and filmmaker/musician David Nixon created a trippy, laugh-out-loud, animated musical film that looked into the origin stories of each of these artists, their history, artistic heritage and hilarious path to the present. Galvin read “psalms” as the Pope of Specialness, Nixon and his band The Half-Brothers capped things off with a ditty about out universal need to be special. 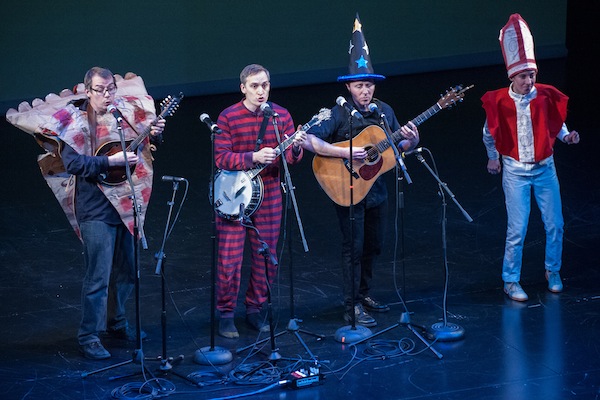 “The Deeps“
C. Davida Ingram and Hanna Benn (pictured here with Rachel Ferguson) layered Benn’s haunting vocal work with Evan Flory-Barnes flawless work on bass, then woven with intimate autobiographical readings from Davida and recordings of her experience in hypnotherapy. 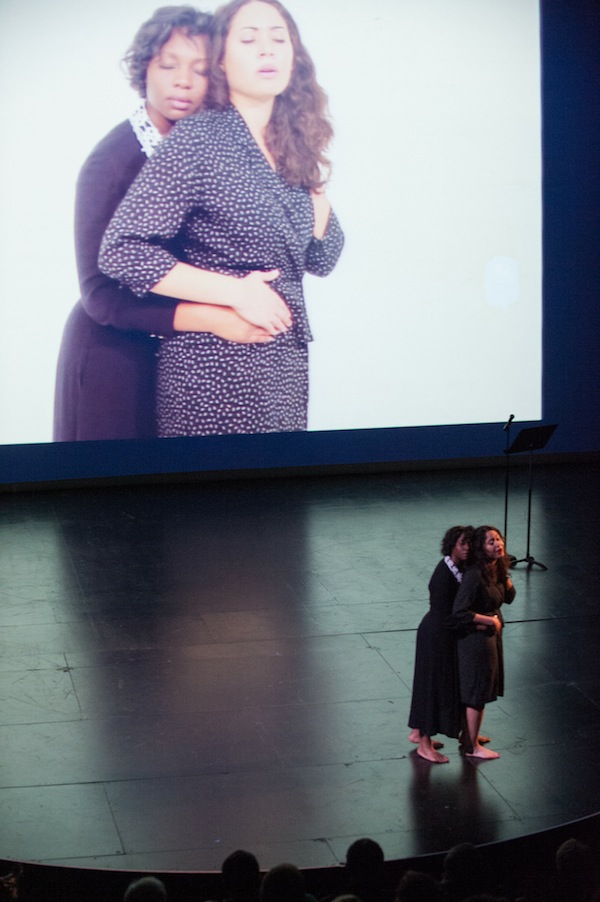 “We Call Out“
Steven Miller and Sarah Rudinoff began in the theatre world, snuggling at a meeting of the Seattle Cuddle Puddler’s Association. The pair then practically dove off of the stage and into the screen, where they documented a hilarious, hallucinogen-fueled trip to Smoke Farm, full of rituals led by Miller’s friend White Eagle, tree-swings for two, many-costumed dance parties and conversations reaching deep into these performer’s pasts. 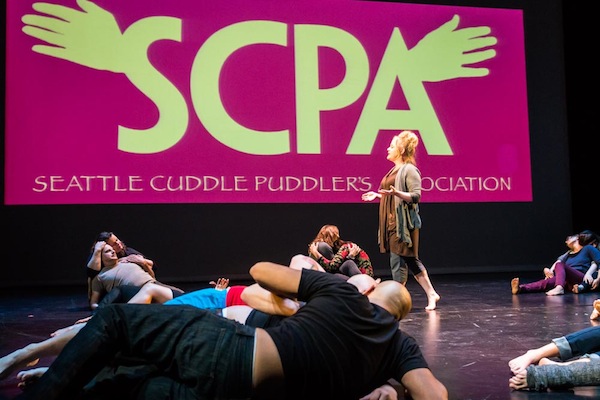 “Charlie”
Multimedia theatre artist Justin Roberts and rapper Raz Simone created a theatrical epic in three scenes that traveled from the earth to the heavens and back again. A little boy, an ivory tower, CB radios, a crashed Cadillac and a death—all in pursuit of the great unknowable being Charlie. 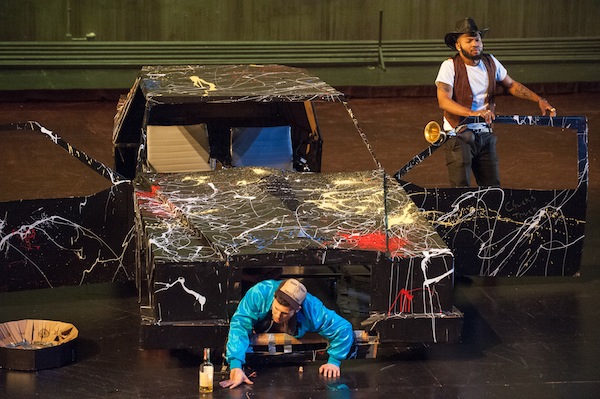