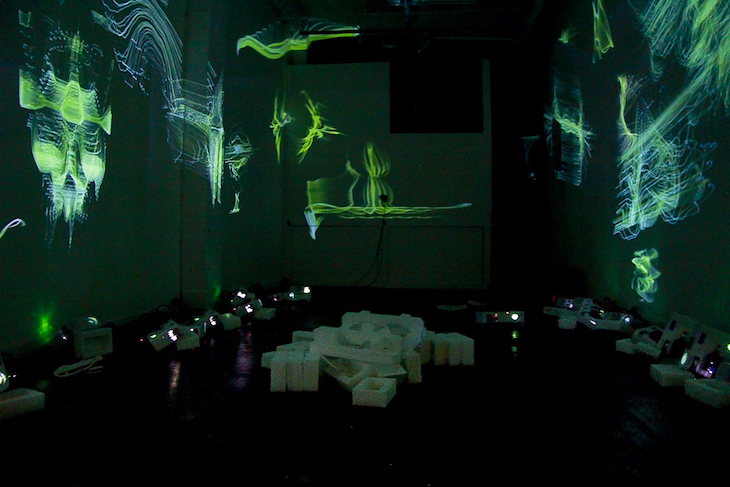 The noise is near-maddening. A violently loud tapestry of deep, reverberating electronic sounds has a physical force to it, filling the dimly lit exhibition space of CoCA, the Pioneer Square nonprofit art gallery. The only light comes from a few dozen projectors and green laser-like lines squirming and throbbing all over the walls, ceiling and floor. On a table near the entrance, Gary Hill stands bent over his laptop testing the sound. With his well-worn shirt and silver hair tamed by a ponytail, he resembles both a DJ and a garage tinkerer.

Hill, of course, is neither. He’s a Seattle-based artist of world renown and is considered a pioneer of the “new media” genre. His boundary-pushing videos and sound-based work from the ’70s and ’80s could be called trippy, mind-bending or an ontological unpeeling of language, sound and perception. These works were and are featured in the world’s most prestigious museums and exhibitions (he also won a MacArthur “genius” Award), but I find this factoid much more revealing: The famed philosopher and semiotician Jacques Derrida did a cameo in one of Hill’s videos.

Hill still shows all over the world—and now he returns to his home base with an immersive installation at CoCA, opening this Thursday, called Linguistic Spill ([un]contained). I sat down with him and Joseph Roberts, curator of the show, longtime CocA board member and arts patron, to talk about the work.

From the relaxed way Roberts swings his arm on Hill’s shoulder, you’d suspect them being lifelong friends—but not so. “We haven’t spent a whole lot of time hanging out,” Roberts says.

When did you meet each other?
Hill: I did this project at [Pacific Northwest survey show] Out of Sight last year; we probably ran into each other then.

Roberts: I’ve always been a fan. But I was particularly impressed by a work of yours two years ago at the Kochi-Muziris Biennial in India.

Hill: You saw that?

Roberts: Yeah. I walked through the door and was completely baffled. Can you please explain what the hell that was?

What did it look like?
Hill: It was called Dream Stop. A huge, hanging dreamcatcher contained hidden cameras. Some 30 projectors then projected images of whoever or whatever was in the room back into the room, completely covering it. A catastrophic accident with surveillance.

Roberts: It captured the idea that we are all under surveillance, everywhere.

Sounds overwhelming.
Roberts: Yes, though not as overwhelming as here [at CoCA]. There was no sound in India, so it felt more ethereal.

Hill: Without the sound, this piece in CoCA is nothing.

What exactly are we hearing?
Hill, walking off to play some sounds: The “soundtrack” consists of 34 electronic constructs created using modular synthesizers while feeding them into a Rutt/Etra video synthesizer [an analog device for image processing and real-time animation] to formulate the image in real time. Kind of “old-growth” technology. There’s nothing that comes close to the kind of organic energy this machine has.

Roberts: To me, these video projections reference linguistics. I don’t understand what they mean, but I feel like I’m on the verge of understanding them. It reminds me of old Arabic poetry, which I don’t understand either. I like to think of Gary’s images as poems floating on the walls and ceilings.

This installation is a continuation of research work you started in 1977. The world has changed since then. Do you think this feeling of being overwhelmed by all the sounds coming at us simultaneously, on a loop, is in any way similar to how people feel today looking at their smartphones?
Roberts: It’s like the tidal wave of information coming at us every freaking second from every gadget.

So this installation resembles the current state of affairs, then?
Hill: It’s not what I am trying to do. Maybe this is a frustration response. Perhaps it’s almost competitively trying to make something that is as viscerally overwhelming as reading the fucking newspaper every day.

Roberts: It also represents the project itself, and how it takes on new shapes and could blow up, get outside. This is already different from the Linguistic Spill you did in the Museum of Art, Architecture and Technology in Lisbon.

How so?
Roberts: Microsoft’s Time-of-Flight technology that Gary used here adds to the experience, to the intensity of the viewer being part of the project.

What’s that?
Hill: These two little sensors see depth. Based on the changes in depth it is putting out voltage. I will use that to modify the sounds you hear. Even if nobody’s in here, the machines will still “read” objects in the room. But if somebody moves, it will fluctuate quite a bit. If you walk to the end of the room a group of sounds will get really loud.

Roberts: People become an integral part of the experience. Pretty neat. This technology is not currently on the street.

Where did you get it?
Roberts: Microsoft has been kind to lend us the technology and some engineering staff to help us.

How did that partnership come about?
Roberts: I approached their partnership teams. I wanted to see if I could pitch Gary for their Artist in Residence program, and I also wanted to see if they might support this project. One of the reasons this project came to be, and was interesting to me, was in juxtaposition to the Seattle Art Fair. Of course, it makes the local arts scene better. But you can go to fairs in Miami, and then Basel and then Seattle, and it’s mostly the same artists and mostly the same or similar formats. Like going to Costco — which is awesome: You get big volumes of stuff, and it’s the same whether you go to New York or Seattle. This installation, to me, is busting out of those confines.

This kind of work is also harder to commercialize than most work at the fair.
Hill: You know, I’m really fed up with the art world. The whole structure of it is false. The fact that there’s a hundred artists that demand millions of dollars—there’s something terribly wrong about it.

Sounds like you are fed up with capitalism more than anything.
Hill: Yes, but the art world is an extreme case of the worst aspects of capitalism. And then all these small galleries are closing…

Are they?
Hill: In New York City, yes, many have closed.

Roberts: Those that survive are driven by passion, are paying into it to make it happen.

What about CoCA?
Roberts: Same difference. CoCA’s been around for 30-40 years, basically bankrupt. Why does it work? Because we can’t not do it. I’ve been on the board for over a decade, paying for the privilege of doing something I think is important. People come in and say they love it. Sometimes there’s bad shows, but we keep doing it, because we believe it’s important. Shit, Gary, you are not making art because you get paid. You just love it. You can’t not do it.

Linguistic Spill ([un]contained) is on view at CoCA through Sept. 29.