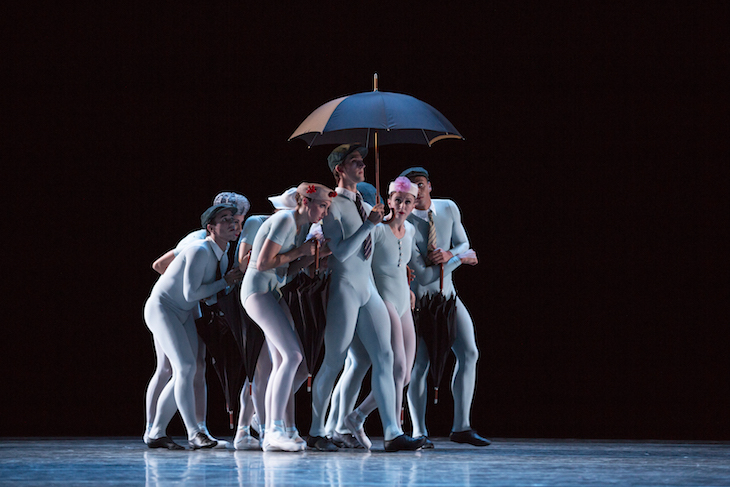 Miles Pertl with PNB company dancers in Jerome Robbins’ ‘The Concert (or, The Perils of Everybody).’ Photo by Angela Sterling

One of the best parts of watching a Jerome Robbins ballet is seeing the artists really enjoying themselves. This weekend, the company dancers of Pacific Northwest Ballet grinned their way through a two-program tribute to the choreographer, one of the fathers of American ballet. Robbins, who would have turned 100 this year (he passed in 1998), choreographed ballets, Broadway shows and iconic films over his 50-plus year career. PNB celebrated Robbins’ contribution to ballet with programs containing seven of his most famous works: Circus Polka, In the Night, Afternoon of a Faun, Other Dances, West Side Story Suite, Dances at a Gathering and The Concert.

Program A kicked off with Robbins’ short, sweet Circus Polka, set to a 1942 Stravinsky polka. Robbins choreographed Circus Polka for New York City Ballet’s 1972 Stravinsky Festival; the piece features 48 young female ballet students and a single Ringmaster, played Friday night by PNB artistic director Peter Boal and Saturday night by former principal dancer Ariana Lallone, who retired from PNB in 2011. Boal, a former NYCB dancer who both studied and performed under Jerome Robbins, was convincing as the whip-wielding Ringmaster but it was Lallone who commanded the role on Saturday, her stage presence just as magical as in her years as one of Seattle audiences’ favorite PNB ballerinas.

In the Night, set to Frederic Chopin’s Nocturnes 27, 55 and 9, was the highlight of both programs. The simple but intense love story, delicate choreography and Chopin’s moody Nocturnes communicate the common emotions in the three stages of romantic love: “tender young love, mature and balanced love, and fiery passion” as described in the program notes.

The ballet is performed in three pas de deux accompanied live onstage by pianist Cameron Grant. On opening night, newly promoted principal dancer Leta Biasucci and Benjamin Griffiths performed as the youngsters, flitting around each other coquettishly onstage; Laura Tisserand and William Lin-Yee as the dependable married folk, supporting each other through impressive lifts across the floor; and Noelani Pantastico and Jerome Tisserand flinging themselves together and apart as the passionate lovers. Pantastico was in a new form in this role. Her technique and stage presence have impressed audiences since her return from Les Ballet de Monte-Carlo in 2015, but there was a new depth of emotion to her dancing on Friday night. Always fiery and strong, Pantastico’s upper body, hands and face were softer, and in combination with her incredible control, there was a new artistic maturity to her dancing.

James Moore and Rachel Foster skillfully performed Afternoon of a Faun, a pas de deux that uses Debussy’s famous score but follows a different storyline than the 1912 Nijinsky ballet of the same name. According to New York City Ballet lore, Robbins choreographed Afternoon of a Faun after glimpsing a teenage Edward Villella (later one of NYCB’s most famous dancers) napping in a studio. Moore stars as a young man asleep in a dance studio who awakens and gazes at himself in the direction of the audience, where a studio mirror would typically be found. Foster appears as a young woman who dances with him in a dream, then bourres gently away at the end of the piece. The choreography forces Moore, a strong and capable dancer with enormous range, to appear more an object on display than an artist performing his craft. Likewise, Foster’s delicate dancing is lost as she appears to be a specimen of femininity that Moore’s character caresses and lifts gently into the air without truly connecting with her.

Other Dances, performed for the first time by PNB on Friday evening, was the most technically brilliant piece of both programs, and highlights Robbins’ talent for making large artistic statements with very few tools. In a short film about Robbins’ life, shown between pieces and produced for the centennial by the Jerome Robbins Foundation, Robbins describes repeatedly listening to every piece of music used in his ballets so that he could consider every musical note while creating his choreography. Each step in this romantic pas de deux riffs on the notes in the Chopin mazurkas and waltz that comprise the score, played perfectly onstage by Mark Salman. On Friday, the images produced by dancers Pantastico and Seth Orza were so dramatic in their lines and musicality that they froze in my head as if a flashbulb had gone off and burned it in my memory.

Leading off Saturday’s equally evocative Program B was Dances at a Gathering, an airy, happy series of pas de deux set to Chopin waltzes, mazurkas, etudes and nocturnes, Robbins’ first ballet for NYCB after a decade-long stint on Broadway, and that influence is fun to watch. Dances is jaunty and romantic with moments of playful choreography that made the audience giggle. Dancing by principal company member Sarah Ricard Orza, while always technically sound, was brilliant.

And then there’s West Side Story. Program A concluded with a suite of dances from the 1995 New York City Ballet production, staged by Robbins years after he choreographed the hit 1957 musical and 1961 film of the same name. The songs, story and dances from Robbins’ West Side Story are iconic in American theater culture and PNB did a splendid job channeling the show’s jaunty, greaser imagery. On Friday, Ezra Thomson and William Lin-Yee were convincing and terrifying as the leaders of the Sharks and Jets. Amanda Morgan as one of the Jets’ “girls” displayed enormous stage presence and a huge increase in technical skills from last season—we’ll see great things from this dancer in the next few years.

West Side Story’s portrayal of Puerto Rican culture, however, doesn’t honor Robbins’ legacy, it furthers negative cultural stereotypes. The 1957 musical was created during an influx of Puerto Rican immigrants to New York and is full of white stereotypes about Puerto Rican culture: poverty, high birth rates, machismo and female subordination. While the show is a technical masterpiece, the catchy songs and dances in West Side Story stick in audience’s minds, and harmful racial stereotypes sneak along for the ride.

Why do companies continue to produce West Side Story Suite? It isn’t Robbins’ only work that bridges ballet, theater, art and music in that magical Robbins way, so it’s not a required ingredient in a Robbins tribute. The Concert is an evocative portrayal of artist Edward Gorey’s world of angled people bent on their own (comical) destruction. Gorey’s black inked prints of pointy-faced commuters walking through a train station in the rain are brought to life in The Concert through Robbins’ genius use of choreography, acting, color and dramatic music. Principal dancers Lesley Rausch and Lindsi Dec and corps de ballet member Ryan Cardea danced the lead roles on Saturday night and seemed made for the dramatic, hilarious parts.

Combining ballet technique and artistry with unique pedestrian movements was a gift Robbins gave to people both performing and viewing his choreography. By representing the normal actions and thoughts of normal people in classical ballet, Robbins shows us that we don’t have to think about art as a foreign object—we can understand it in the way we understand our own lives.