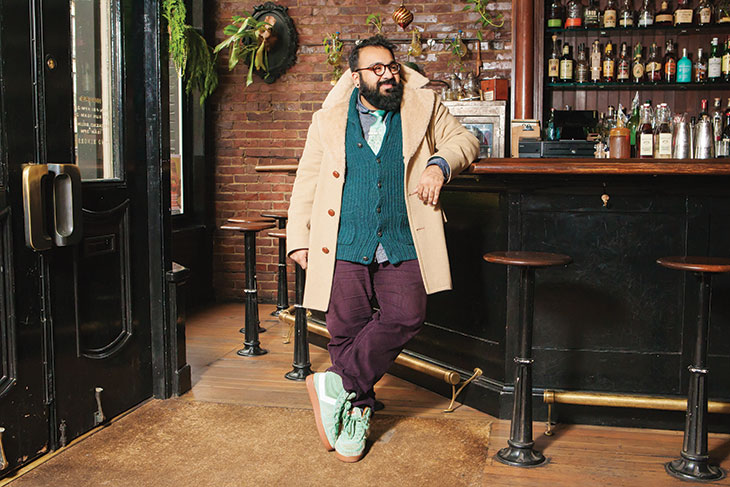 WHO Ashraf Hasham, the 26-year-old director of programs at TeenTix who moonlights as an event producer and entrepreneurial community-builder. Born in Karachi, Pakistan, Hasham arrived to America as an infant and grew up in Ballard. After a stint in New York City studying arts administration, he returned to Seattle in 2012. Among Hasham’s current ventures is a worker-owned cooperative cafe called Sway Co-Op—part community living room, part affordable vegetarian eatery, part arts space boasting 100 percent radical minority-centered inclusivity.

THE LOOK “High-brow/Low-brow. Colorful hi-top sneakers with a vintage fur-lined coat. Tweed with a bright beanie. Full of color; fun but not funny. Like bumping Drake on the way to the Opera. Or smoking a blunt in a three-piece suit, in the snow. An ode to NYC street style of yesteryear, while maintaining the comfort and the PNW-blasé of today. It’s all about accessories: glasses, ties, the occasional necklace or ring. I don’t know what ‘power-clashing’ is, but I’m pretty sure I inadvertently comply. Yes to layers. Known to never pay full price.”

ICONS “Remember that parasol-toting dude Fonzworth Bentley, the personal valet to P. Diddy in the Making the Band days? That flamboyant-ass guy for sure. Plus Pauly Shore like 25 years ago. And Kanye West like 10 years ago. And, really, the combined sartorial greatness of the NBA’s post-game press conferences has been quite inspiring.”

UP NEXT Having just finished a year on the Seattle Arts Commission as part of the YMCA’s Get Engaged program, Hasham is partnering with colleague Patrick Goodspeed to produce nightlife events at Percy’s in Ballard, an apothecary-style cocktail bar. Calling themselves “Lavender Buds,” they’re booking DJs to spin soul, psych, funk and loopy beats. Catch their Indistinct Rhythms events Friday and Saturday nights.