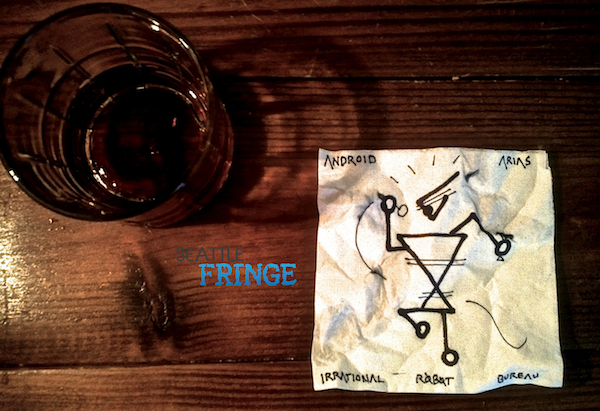 Wednesday evening at venues across Capitol Hill, curtains will rise on Seattle’s first Fringe theatre festival in 10 years. To help prepare your motherboards for fringe theatre overload, I sat down with Adrian D. Cameron, Bureau Chief of the Irrational Robot Bureau, to discuss his company’s original new production Android Arias. Set in a ”surreal karaoke bar of the future” called The Android, the show explores the intersection of live theatre, electronic music, and the many other substances human beings use to transform themselves.

How is the Android “unlike any other karaoke bar”?
Well, rather than singing Journey or Madonna the characters perform pieces that are a little bit like mini one-person shows. They all have different relationships to alcohol. They all have different relationships to performing. And they all are at a point where they have a particular crisis that’s reached a particular pitch and they have choices to make. They use hybrid musical styles that reflect their tastes and interests and innards and things. One character, his music is a synthesis of disco and glitch music. This particular character works in IT but he also is in love with the freedom and the divas of the disco scene. Another character has a mix of hard rock and techno, and another is blending crooning jazz standards and dubstep. The semiotics of silent films plays a large part in this piece as well.

Are you just really passionate about karaoke?
Actually I was interested in exploring the intersection between performance and booze, which sort of equaled karaoke. I think those are both very powerful stimulants and it’s easy for people to get swept away, especially with the double whammy that karaoke provides. They both allow one to present some kind of self to the world that is crafted in some way.

What about all of the futuristic robot references?
It’s funny, I was never really that interested in science or technology but more and more I’m fascinated by our relationship to technology—the interfaces we create and use to relate to each other and the world. And like most people I like robots. This piece will incorporate some mulitmedia elements and a live electronic score that’s going to be composed and written by an artist called Irrythmia. It’s about the actors and characters relating to the different media, incorporating all of this into how we understand what they are.

When you talk about different substances and modes of communication that allow people to create new personas….in a way you’re saying that alcohol and Facebook are not so different. Except that one presents a filtered version of the self and the other non-filtered.
Truly. We have a lot more tools than performance and alcohol that allow us to shape our persona to something we want to present or that we believe we are. All kinds of communication do that in different ways. We get to live out certain fantasies of ourselves, whether we’re playing another character or whether it’s just ourselves with a karaoke mic. And the fascinating thing I find about it that has also come up in the show is that so infrequently do we actually communicate what we think we’re communicating. I mean, we’ve all seen those people at karaoke bars who think they’re really tearing it up when that’s not really the case.

So is the evening going to be a mix of really awesome karaoke performers and bombs?
They’re all awesome. Even the bombs are awesome.

Do you think karaoke is a little bit like a Fringe Festival in that sense?
There’s a kind of schadenfreude there.  When I think of Fringe I think of risk-taking, and risk-taking wouldn’t be risk-taking if people weren’t failing all the time. I’d always rather see a huge failure that was born of a giant risk than a mediocre or moderate success.