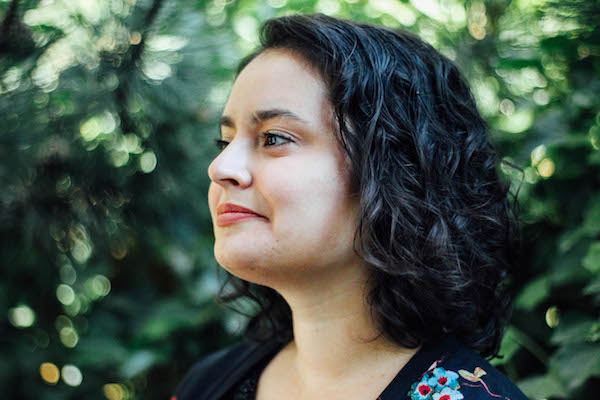 An airplane thunders overhead as a father and daughter drink champagne and carry on a good-natured argument. It’s her birthday and he thinks she should be celebrating with friends—what about Claire? She answers, “Ella no es my friend, she is my sister, y está en Nueva York. And I don’t like her.”

A new experience with an old play is rare, but sitting on this concrete back porch for Proof, that’s exactly what I’m having. Outdoor theatre is frequently about the picnic, but everyone on this patio is watching. That line about the sister always gets a titter; when Ana Maria Campoy delivers it in Spanish freckled with English (or is it the other way around?) it elicits a genuine laugh.

Proof Porch Project is a group formed to present Proof, David Auburn’s 2001 Pulitzer Prize-winner for Drama, on porches around the Seattle area. After this August run, plans are in the works for Vashon (September) and Port Townsend (TBD). The short-term dream is to take it to places like Yakima, long-term maybe Mexico and Puerto Rico, always outdoors, always free.

Campoy, who is also one of the show’s producers, had long been on the hunt for a project to center bilingualism and authentic American Latinx experience, and a re-read of Proof two years ago struck a personal chord.

In the story, Catherine is the daughter of Robert, a recently deceased genius mathematician and professor. Her sister Claire, who works on Wall Street, has come home to Chicago to help with the funeral. Hal, a former student of Robert’s, hangs around the house to comb through the countless notebooks Robert left behind in search of academic gems. Most of them are gibberish, written in the years when Robert’s mind was going.

“It gave me flashbacks to when my abuelita was diagnosed with Alzheimer’s and dementia,” Campoy says. “She’d been living in this country for over 50 years. But even though she’d lived here for so long, when she got sick she lost her English.”

On an equally personal level, Campoy dedicates much of her artistic energy to centering Latinx artists and audiences. “Something I keep learning in arts education is that you won’t feel theatre is for you if you just see the same stories over and over again and the same faces over and over again that aren’t like yours,” she says.

Campoy brought Proof to director Arlene Martínez-Vázquez, also a translator and educator, and they started talking about Spanish in the context of the play and using Spanish to define relationships (PPP’s third producer, Matt Sherrill, is the show’s production manager). Catherine, for example, almost always answers Claire in English. “She’s shutting her sister down,” Campoy says. “She doesn’t want to communicate with her in Spanish because to her it’s a language of intimacy. These characters have relationships with each other, with their identity as Latinx people and with the language itself.”

While translating, they never worried (too much) that audiences would be lost. “We see opera all the time and we understand exactly what’s going on,” Campoy says. “You may not understand the first 10 minutes of Shakespeare, but by the end you’re getting it.”

The August run included venues in Beacon Hill, Burien and North Seattle. “If we’re not being invited to the table, we don’t need your table,” Campoy says. “We’ll make it work.”