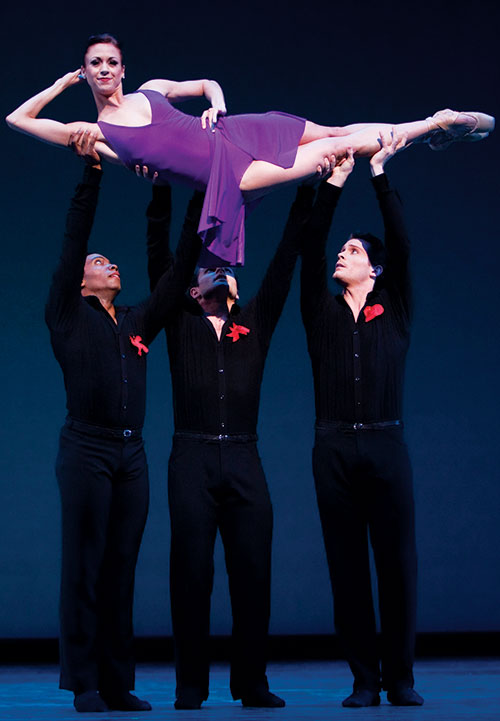 Director’s Choice is Pacific Northwest Ballet’s annual sampler platter, a collection of four works of diverse styles, all of which tend toward contemporary innovation and away from classical ballet. You’ll find no Sleeping Beauty here.

“I like to choose works that may not be on our audience’s radar,” says PNB’s artistic director Peter Boal. “They’re all works I’m inspired by, so I’m really catering to my taste, but I want to let our audiences know that these creations are worth taking a close look at.”

The four pieces in this year’s set include a flirty, jazzy number from Broadway choreographer Susan Stroman called “TAKE FIVE… More or Less.” Set to music by Dave Brubeck and Paul Desmond, the ensemble piece is based on Stroman’s idea that artists never really “take five” but are always working, even in their sleep.

“Kiss,” choreographed by Susan Marshall and set to minimalist music by Estonia’s Arvo Pärt, suspends two dancers in harnesses above the stage for an emotional, aerial love story. In “State of Darkness” choreographer Molissa Fenley sets a sinister solo to Stravinsky’s The Rite of Spring, which itself caused a near-riot upon its premiere in Paris in 1913. The powerful solo can be performed by a man or woman—and Boal was among the first to dance it. He calls it “a test of stamina.”

“I wish I could still take it on myself, but it’s almost as rewarding to help pass the torch,” he says.

Rounding out the evening’s program is a world premiere by Spanish-born dancer and prolific choreographer Alejandro Cerrudo from Hubbard Street Dance Chicago. Commissioned by PNB, the piece remains a mystery while Cerrudo and the dancers continue to work in the studio. “It feels instantly fresh and innovative with a hint of humor,” Boal says. “Alejandro is like a kid in a candy shop. The dancers are sore but invigorated by his energy.”