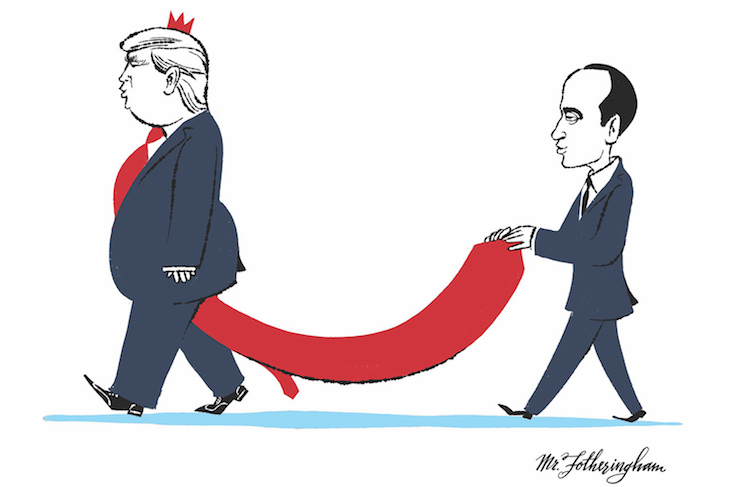 "The Page" by Ed Fotheringham


When illustrator Ed Fotheringham watched Trump political advisor Stephen Miller take to the TV news to defend the administration’s Muslim ban in February, inspiration struck. Fotheringham found himself drawing a cartoon, “The Page,” which shows Miller trotting along behind a be-crowned Trump, carrying the President’s ludicrously long tie behind him as if it were a king’s robe.

“The wit comes from pointing out the obvious,” says Fotheringham, an Australian-turned-Seattleite who first rose to notoriety in the early 1990s as the artist behind several Mudhoney album covers. He’s since made a long, successful career illustrating for advertisements, books and publications such as The New Yorker, The Washington Post, The Boston Globe and many others. But he’d never done political cartoons—until now.

“The Page” is now one of dozens of Fotheringham cartoons about Trumpworld. As of press time, he was up to 34 total, all of which are posted to his Instagram and Facebook accounts. He’s making a new one almost every weekday and is quick to point out that the news gives him plenty of material. “Every single day something ridiculous happens,” he says. “It just doesn’t stop.”

All of the cartoons share the spare style of the original, with Fotheringham restricting himself to the same four colors and minimal line work. Unlike most political cartoons, these have a loose, abstract and absurd quality that makes them feel particularly fresh and uniquely funny.

Fotheringham says each drawing “starts with a simple idea, usually a joke. I’m a big fan of dumb—and there’s some stupid 16-year-old boy humor in there.” And yet, some subjects only have so much mileage in them: “I can only do one golfing joke.” 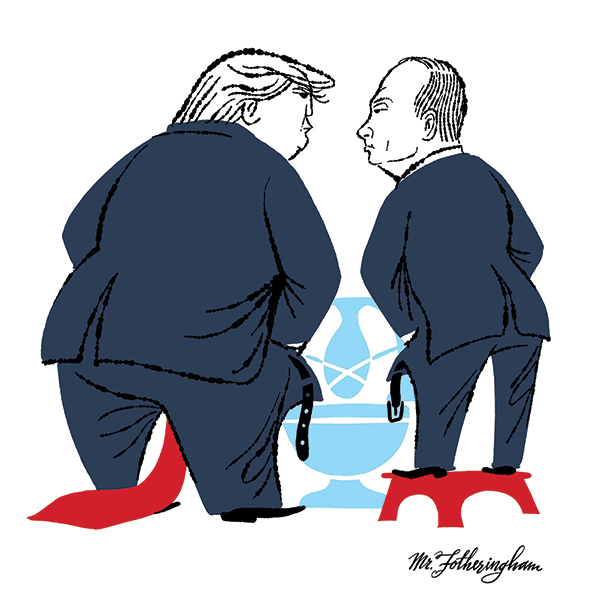 At this point, Fotheringham has no plans for where these cartoons might end up, though he’s open to collecting them in a “fluffy book,” should any publishers come calling. For now, he’s content to continue enjoying the momentary immediacy of drawing them, of matching the Trump administration’s reactionary style with reactionary images.

You may never look at Putin the same way again.