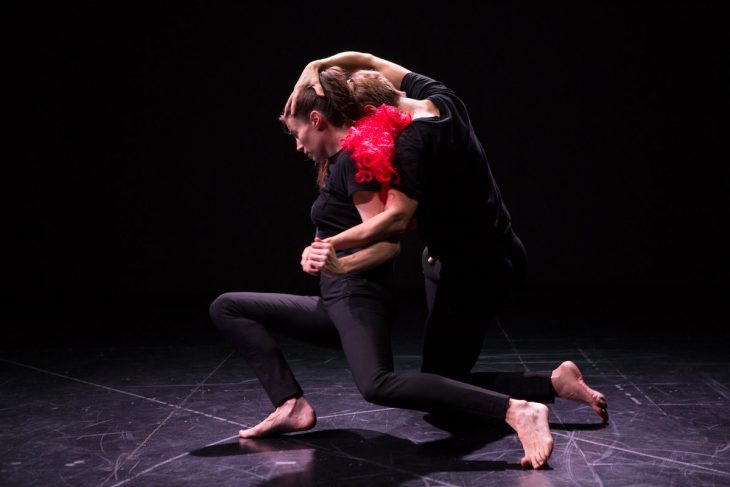 I’ve heard of “cattle-call” dance auditions where half the hopefuls are eliminated after simply walking across the room. While that story smacks of injustice (they didn’t even get to dance!), it’s a reminder of just how revealing the humble walk can be. Last weekend at Base, Beth Graczyk and Corrie Befort began their duet just walking, standing and walking again, giving the audience plenty of time to contemplate how the experienced dancer does the most basic movement. The smooth shifting of weight, the prehensile toes that reach and spread, the easy, pedestrian quality that takes years to cultivate.

Befort & Graczyk, as their new bi-coastal performance company is called, have a long history performing together. From 2008 until Graczyk moved to New York in 2015, they were two-thirds of performance group Salt Horse. A fixture in the Seattle avant-garde scene, Salt Horse left a small but devoted following that gathered in Base for the duo’s reunion in Rose Blue.

The deceptively simple and slow beginning is a moment of reset, which allows our brains to recalibrate for a different kind of observation than is normally required for our busy daily lives. And we need that, because when the two begin dancing, it gets pretty weird. Befort hops on her knees, mouth gaping toward the ceiling. Graczyk slithers and flops in a wide arc on the floor, tracing pathways with her cupped hands like some kind of highly articulate seal. As they move through shifting creature-states they are constantly tracking each other in the space, even in their disparate tasks, always in duet.

Graczyk and Befort are capable of imagining beyond the expected, creating novelty even for the most veteran dance-goer. Even pedestrian, task-based action is infused with strange and interesting choices. Rather than just putting on a sweater, Graczyk dives into it. When Befort brings out a pair of metal folding chairs she wavers back and forth, letting them bang and clank together before setting them down.

This kind of work could easily feel messy and experimental, which is its own kind of interesting, but the action in Rose Blue, no matter how indefinable, feels precise and intentional, a testament to Befort and Graczyk’s skill. Their commitment to each idea is fully embodied, from their fingertips to their faces. Befort curves her spine over to the side, walking on the left sides of her feet in a giant “C” shape. Then she scrunches her face like she’s eating a lemon. Then she goes entirely rigid, her flopping wrists dangling like a marionette doll. Their bodies and characters seem entirely plastic and in a constant state of shift, always holding multitudes.

A few images begin to reappear, including two bizarrely exaggerated characters with Southern gentry accents who verge on inhuman. Graczyk seems about to jump out of her skin, gesturing with a frantic, desperate energy, her face spread wide with excitement and nervousness, eyes looking everywhere at once. Befort slinks around the space, introducing Graczyk to invisible men, treading the line between sultry and slovenly. And then suddenly they are themselves, trying to recall and recreate a long-past meeting in a bookstore café.

Ideas rise to the surface and then dissipate as quickly as they came, creating a fluid continuity that completely evades story arc or thematic takeaways that would allow me to pinpoint some kind of larger idea. These post-characters, in a constant state of flux yet completely committed in every moment, seem to pry at edges of reality.