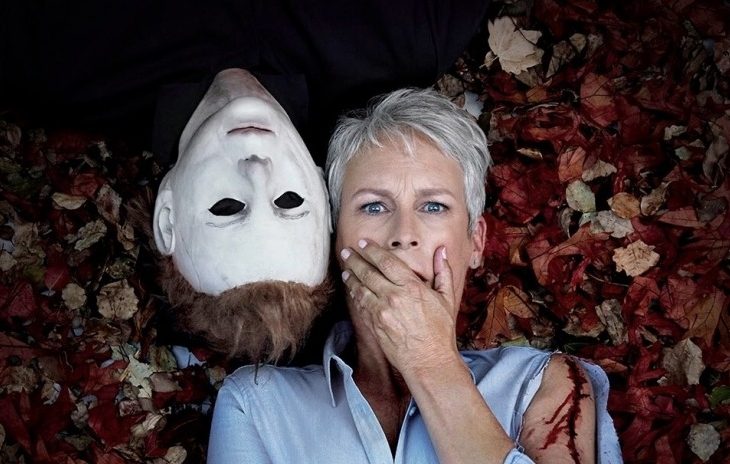 Have any of these people ever considered moving out of Haddonfield?

Forty years after John Carpenter’s 1978 horror classic Halloween chronicled Michael Myers’ massacre in the Illinois suburb, director David Gordon Green’s redux returns, nine sequels later, to revisit the wreckage. On one hand, the premise is absurd: Haddonfield is terrorized every year on the same day, and yet the town’s mental health authorities and police can’t grasp that Myers lives to kill on Halloween and Halloween alone. On the other hand, the befuddling repetition of the Halloween franchise illustrates an uncomfortable truth about trauma: When committed over a protracted period, domestic violence is a social relationship that ties abused to abuser, creating a psychic bond and a set of sick rituals that the two share with one another.

“Sometimes without knowing it, we unconsciously stick around to repair something like that,” actress Judy Greer says of her character’s post-traumatic relationship to Haddonfield. The principle is illustrated in myriad ways in the new Halloween but never more clearly than in the movie’s culminating scene.

Laurie Strode (Jamie Lee Curtis) has spent 40 years praying that Michael escapes from a local asylum so that she can kill him. Her house is stocked with a battery of boobytraps that would make Kevin McCallister proud and an arsenal of assault weapons that would make Charlton Heston blush. Sensing she has Michael trapped in an upstairs room, Strode deploys mechanical doors that shut whenever she leaves a room to prevent Myers from attacking her unexpectedly from behind. The tactic ties prey to predator, assuring the inevitability of conflict in close confines, granting Strode’s divine request for intimate revenge.

Curtis is the undisputed emotional anchor of this film, with a resolute performance steeped in finely aged feminist rage that has earned Halloween the distinction of being the first film in Hollywood history with a female lead over age 55 to debut at #1 in the box office. In the shadow of the #MeToo movement, her performance is less about the glory of gunning down an adversary than it is about the believability of survivors. Ever wary of Myers and the male maleficence he represents, the elder Strode’s resilience has skipped a gene; her doting daughter Karen Strode (Judy Greer) doesn’t want to believe that bad guys are everywhere, but at a young age granddaughter Allyson Strode (Andi Matichak) recognizes the evil that men do. In a reversal of the trope of the horror villain who only kills promiscuous teens, Michael Myers is never more relatable than when he impales a teenager who tramples on Allyson’s sexual autonomy.

The bumbling psychiatrists of the Halloween films often want us to believe that there is a redeemable soul underneath Michael’s mask, and the 2018 installment is no different. Such a character portrait establishes Michael Myers as the ultimate “sad boi,” an emo butcher who buries a 14” KitchenAid blade in your neck because he feels misunderstood. At heart, the emotionally unavailable Michael may be a guy who wants to listen to My Chemical Romance and talk about his feelings, but this does not absolve him of the fact that the threat of rape is everywhere in Halloween. Myers stalks women in public restrooms, enters their homes unannounced, pulls their hair from behind to concuss them. Through it all, that eerily vacant William Shatner effigy, given a melancholy tinge by art director Sean White, covers his face. The mask has aged, and it’s the effort required to sustain four decades of molten misogyny that has aged it.

Looking back at the original Halloween from 1978, much of the film takes place in pedestrian settings, with Myers creeping on his victims in broad daylight as they arrive home from school, staring at them as they do their laundry, calling them on the phone and breathing heavily into the receiver and not saying a word. But when Laurie Strode accidentally bumps into a lecherous cop while checking for Myers over her shoulder, you understood that for women the creeps are everywhere, whether they wear masks or badges. It’s something of a relief when Myers finally appears on screen (even if it’s to maim someone) because you no longer have to expend emotional energy wondering where he is. Practically every second of the Halloween franchise (11 films totaling 1,050 minutes in length) fails the Bechdel Test because it’s so preoccupied with Myers’ comings and goings.

The true source of terror in the original Halloween is the omnipresent specter of male sexual attention, a form of domination with which Carpenter’s camera forces complicity via gawking long shots and extended point-of-view takes that place the viewer in the killer’s shoes. In the 40 years since the release of the original, these devices have been imitated relentlessly throughout the horror genre, to greater (Nightmare on Elm Street, 1984) and lesser (most of the Halloween sequels) degrees of success. As in most horror films since, the suburban setting is a silent character in Halloween (1978), with Haddonfield’s empty streets facilitating Myers’ creepy ways. In Carpenter’s universe, the lack of faith in the public trust required to build a lifestyle around cars and isolated homes resembles society’s inability to believe women experiencing domestic violence.

The 2018 film falls short of its 1978 predecessor because the steep decline of the American attention span chopped it down. Film scholar James Cutting’s pioneering research on average shot length shows how MTV-style editing has become the rule in Hollywood over the last century. Whereas the average shot stayed on screen for about six seconds before a cut in the 1970s, that number has shrunk to about 2.5 seconds today. The net result of this acceleration is that the sustained suspense of the original Halloween is lost in its Millennial successor. And then there’s the latter’s far more detailed carnage: Michael stomping a skull so hard that it withers like a juiced watermelon provides cheap thrills, but the gimmickry of gore does not a better film make.

Watching the 1978 Halloween is a holistically traumatizing experience, boosting your heart rate, flooding your body with cortisol and adrenaline, compelling you to check and double check the locks on your doors and dark alleys near your house. Scary as it is, the film merely dramatizes a daily reality that most women are accustomed to. Rather than a fictive boogeyman in the dark, it took thousands of women stepping into the light to illuminate this condition. Because they did, no amount of corn syrup movie blood can mask that the subplot of Halloween is and always has been sexual harassment.