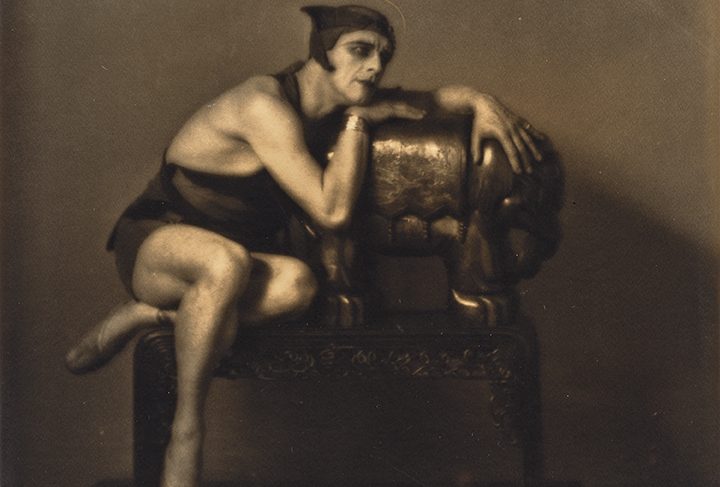 If the flower in the vase of the 1925 black-and-white gelatin silver print “A Shirley Poppy” could speak, it might say, My heart is wide open. I’ve unfurled my petals so you can see it all. Tracing the valleys of light within the crepe-like petals, one imagines photographer Ella McBride responding from behind her single-lens reflex camera, I notice you.

Perhaps it was McBride’s intense focus on the petals catching the light that helped make “A Shirley Poppy” her most exhibited work. Or perhaps the jury members of the 19 international salons that accepted the work perceived something more: a constructed portrait of nature in absentia. Maybe others sensed in the flowers’ transience a reflection of their own mortality.

“A Shirley Poppy” is one of the first works visitors encounter at Tacoma Art Museum’s Captive Light: The Life and Photography of Ella E. McBride, an intimate retrospective that brings McBride’s work back into focus.

When she made the photo, the self-taught, Seattle-based McBride was among the most-exhibited art photographers in the world. But like a poppy, her fine art career bloomed only briefly. She worked for a little over a decade, until the arrival of the Great Depression and modernist photography pushed her to stow her artistic ambitions. She ran her commercial studio until she was 91 years old.

At the time of her death in 1965, at 103, many had forgotten about her artistic past. A family friend peddled her archive of negatives to local institutions. The Museum of History & Industry, the University of Washington and Tacoma Art Museum accepted a few works. Only those negatives and some in private hands survived the annihilation of her archive.

Captive Light: The Life and Photography of Ella E. McBride is the first solo show of McBride’s work in nearly 100 years, timed to “Beyond The Frame,” a regionwide initiative revisiting the legacy of Edward S. Curtis’s images of Native Americans.

Avid mountain climbers, McBride and Curtis met on an expedition to Mt. Rainier in 1897, an expedition during which a climber died on the descent. McBride’s sangfroid in the aftermath of the accident impressed Curtis, who asked her to work for him. McBride agreed to leave her job in Portland schools and eventually became his studio manager, only to venture off on her own about eight years later.

One day, while her employees were out to lunch, she put two lilies — on wilted, one blossoming— in a bowl and snapped a photo. Doubling down on the vanitas symbolism, she dubbed it “Life and Death.” Shot in warm, out of focus black-and-white, the image captures a maudlin vibe.

McBride also snapped dancers and artists in her studio and photographed in the city and nature, as shown by a succession of studio portraits such as the eerie snapshot of ballet dancer Adolph Bolm and a midsummer shot of Washington waters.

Displayed in square quartets, the flower portraits are gripping, and it’s easy to understand her focus on them. Most of McBride’s female contemporaries didn’t touch flowers, artistically speaking, because they were considered too sappy and feminine, but the way she carefully locks in tiny specks of light and guides the eyes with sharp focus suggests mastery.

Gauging whether her photographic dexterity warrants an institutional rediscovery is into thorny terrain. Nothing is void of taste and time, and looking at 100-year-old work with contemporary eyes inevitably obscures the effort. Which is why we should remember that warm, fuzzy tones that feel rather sentimental today were en vogue back then, used to emulate paintings’ pathos, a way to show that photography was capital-A Art, too. It’s also good to remember that today, much like back then, “feminine” is still pejorative shorthand for sentimental. Almost a hundred years after McBride’s successful art career we still only rarely give non-male artists the recognition they deserve.

For better or worse and however genuine the effort, recognizing the work of female artists has become lucrative: There’s cultural—and in some cases literal—capital to be had. The thought that perhaps McBride’s gender had as much to do with her rediscovery as with her descent into oblivion has a tragic ring to it.

How do you measure the artistic merit of a body of work, with few actual works left, as is the case here? Tacoma Art Museum roots McBride firmly in her time and context, such as the Seattle Camera Club, and gives her contemporaries and the people that inspired her a platform. Most importantly, the museum proves that to McBride, flowers were not trivial. Whether it was a tiny glimmer of light, a slender petal or the tension of a vase on an angled ledge, she put her focus to it and noticed.