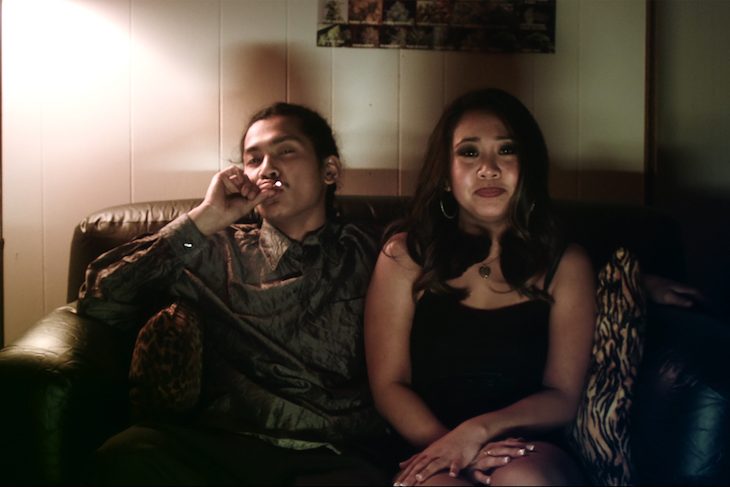 Float, a new short from Seattle filmmakers Tristan Seniuk and Voleak Sip, is a unique and engaging movie, and  one of very few American films fronted by an all-Cambodian American cast.

Sip’s and Seniuk’s debut narrative film revolves around Rocky (Tony Teav), a swaggering but good-natured hustler who helps his family keep their heads above water by selling low-rent goods in a mini-mart parking lot. With his little sister Dani (Peyton Pich) in tow, Rocky attempts to strike up a romance with local barista Jenni (Keanna Mendoza).

Float is an effective mood piece, shot with a visual verve that contrasts sumptuous colors with urban grittiness and distinctively gray Seattle skylines. It’s a singular chronicle of Seattle’s North and South End culture circa 1996, augmented by a great soundtrack of period-evocative tunes from current PNW artists such as Tay Sean Brown, Moni Tep and Jarv Dee. It’s also a funny and sweet character study acted with unaffected charm by an effective amateur cast.

Seniuk and Sip, real-life romantic and creative partners, talked about the origins of and method behind Float.

Where did the idea for the movie come from?

Tristan Seniuk: About four or five years ago, I wrote it out as a feature. I grew up in Lake City, and Voleak grew up in the Ravenna area but had a lot of connections in the South End. So it was kind of a combination of people I knew and people she knew.

Voleak Sip: Plus I kept feeding Tristan stories about my older brother, which he latched onto. I grew up in an immigrant family with weird odd jobs, and I also fed Tristan these random stories of me helping my family make ends meet when I was a kid. We’d do under-the-table jobs; random things like filling little plastic easter eggs from quarter machines with toys, to ship out. That story ended up in the movie.

Seniuk: Originally, the story was more of a survey of North Seattle—stories about odd characters on Aurora and things like that. But then Rocky clearly became the most interesting person in that scenario. A producer friend of ours had read it and said, “This is really funny. You should just make a short.” So I tabled the feature and we stuck with Rocky.

The fact that you were able to assemble basically an all-Cambodian-American cast is impressive. How did that happen?

Seniuk: Once we got the script where we wanted it, we honestly had no idea if we’d be able to make the movie. Not in terms of the technical side—we’ve done bigger projects in terms of scale—but just in terms of, we had no idea if there’d be interest. We didn’t know if we’d need to go someplace outside of Seattle like Long Beach or LA, because we were set on it being specifically Khmai [Cambodian American], and we didn’t want to blanket-cast. We wanted people to actually be where their characters were from.

We found [Tony Teav] almost immediately, thanks to Harry Clean, a filmmaker from South Seattle, who I met a couple of years prior at a [Northwest] Film Forum event. We found Keanna—Jenny—through Harry as well.

He really helped get the word out. A friend of mine who’s an illustrator drew us some basic concept art for our Kickstarter campaign. I posted that file on Instagram, and Harry just started tagging all of his friends. He was like, “I’m Filipino, but here are all of my Cambodian homies!” We probably couldn’t have made the film without him. His connection to every South Seattle thing is crazy.

Float’s very immersive, and it feels like there’s a lot of attention to the period details.

Seniuk: We had two period criteria. I’m sure there’s probably non-period stuff that snuck in, but the two things that had to be accurate were the sneakers and the cars. A sneaker shop in the U-District, Recess, let us borrow something like $3,000 worth of vintage shoes.

Sip: We shot those sneakers on a closed set. They were by far the most valuable thing on the shoot [laughs]!

Seniuk: The cars were super-important, too. Rocky had to be driving an Acura, it needed to be in not-very-good shape, and it had to be at least a few years older than a 1996 model, because that’s the year [Float] is set in.

This feels like it’s got the potential to be something bigger than just this short. Have you thought about picking up the feature format again?

Seniuk: I’m writing Float into a TV show right now. And that wasn’t at all where we started. But Rocky lives sort of an episodic journey. We’ve played about 17 festivals already, and at all of the festivals we’ve attended, there’s always been someone who’s been like, so what’s Rocky doing tomorrow? Now, I guess we’ve gotta figure that out.

Float is a funny and involving story by itself, but you do convey some relevant points just by telling the story you’re telling, about these particular people.

Sip: I’m on the case of getting more representation in general.

Seniuk: And we’ve talked a lot about whitewashing, too. But for my own selfish reasons, I also want to see something that’s interesting, and an awesome by-product is that we show that Rocky’s life isn’t that different from everyone else’s. Ultimately, [Float] wasn’t meant to be a big statement. This is just a world that I think is interesting and cool.