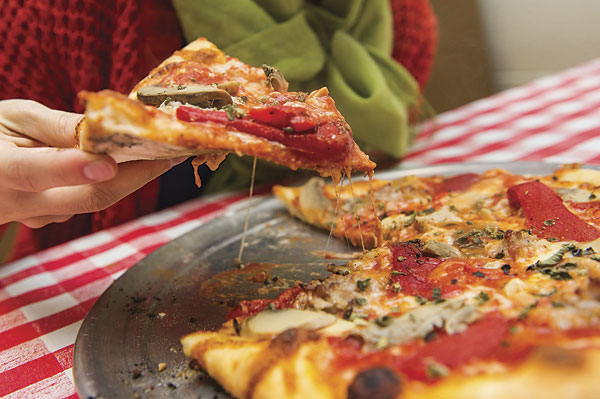 It’s the secret ingredient in the NY-style pies at Italian Family Pizza.

Italian Family Pizza is the only real pizza place in Seattle. At least according to my Uncle Elihu, a hardcore New York foodie from Queens. When he first tasted one of their pies, he called me up to tell me he no longer had to move back east; he’d finally found pizza in Seattle.

Walking into Italian Family Pizza is like walking into a family pizza joint in Trenton. Owner Steven Calozzi is always there, your average sweet-faced Jersey boy who’s maybe had his nose broken more times than his heart. He runs the place with his wife, Jen, his high school sweetheart. Come in once and they’ll remember your name two weeks later. Come in twice, you’re a regular.

Housed in the old Meyers Music building downtown (where, legend has it, Jimi Hendrix’s father bought him his first guitar) Italian Family’s concrete floors, high ceiling and red-and-white-checkered tablecloths give the place a no-frills, garage-like feel. Ceiling fans churn the sounds of Lou Monte and Frank Sinatra with the warm smell of baking dough. A chalkboard hung over the counter lists a simple menu: two sizes (10-inch and 23-inch), three types of pie (tomato, cheese, white) and seven toppings, none of which is barbecued, Canadian, organic or artisanal. They do specials like meatball sandwiches and salads and not much else.

Calozzi refuses to conform to West Coast palates. He doesn’t do slices—reheating, he claims, changes the flavor—and he cringes at orders of more than two toppings.

Calozzi’s pizza is Brooklyn-style, meaning he puts the cheese down first to create a barrier against sogginess then marbles the sauce in splats. The crust is thin, with a crisp bottom layer and a sauce-softened interior that retains a tacky chewiness. The sauce itself is light, sweet and so pure in flavor it’s complex. All of Calozzi’s recipes come from his maternal grandma, whom he compares to Yoda.

The way he talks about it, the Calozzi family blood runs thick with sauce. “We take pizza serious,” he says. “It’s a good food. Doesn’t have to be overdone, doesn’t have to be gourmet or fancy. It’s pizza. It was peasant food.”

Steve Calozzi and his older brother Al grew up eating pizza and washing mobsters’ cars in South Philly, the tight-knit Italian neighborhood made famous by Rocky Balboa. One wall of the restaurant is a collage of framed family photos—playing in the sand at the Jersey shore, Steve and Jen at their high school prom—interspersed with photos of famous Italian family eateries, including Jersey’s famous DeLorenzo’s. Considered by Steve to be the godfather of Italian pizza joints, DeLorenzo’s has three locations run by different family members who haven’t spoken in years.

Which leads to the other authentic East Coast flavor the Calozzis bring to Seattle: the Italian family restaurant feud.

Steve hasn’t spoken to Al since last April. The two parted ways after running Calozzi’s Famous Cheesesteaks in Pioneer Square for almost two years. Steve tells most people the split was over a disagreement regarding alcohol service, but he really believes it came down to fraternal rivalry.

Al no doubt has his two cents, but it seems a bad idea to mention his brother’s name within 20 feet of the former MMA fighter. He still makes cheesesteaks a few blocks over at Calozzi’s, but no longer serves pizza. Steve opened Italian Family in late November, where the family name appears only once, in a mural of the Italian Market in Philly where a storefront awning reads Calozzi and Sons.

At the tail end of a Thursday lunch rush, four professional-looking guys sit next to a nearly empty pizza pan drinking Peronis. Several tables down, a postal worker on lunch break reads a novel over a small cheese pie. In the next booth over, a woman folds in half a steaming rectangular slab and takes a bite. Closing her eyes, she declares to no one in particular, “Fabulous.”

Turns out she’s from Brooklyn. She, Steve and my Uncle Elihu launch into a discussion about Hurricane Sandy. Jen Calozzi comes by with a plate of cannolis, each creamy end dotted with chocolate chips.

The four guys get up to leave, nodding at Steve, who interrupts his conversation to call after them.

“You enjoyed it?” he shouts.

The say they did.